Well ..... We're waiting. We've actually been waiting (and fully priced in) to hear just what? That the Fed will perpetually ease till infinity anytime that we need a hopium infusion? So, what's news about that? We all know that without the Fed printing and maintaining ZIRP the whose system would implode.

So where is the big surprise? That would be if the Bernank does not ease now? How ridiculous is this whole scenario? Why is that a surprise when we all know he's not going to ease till he has to. Why use your last bullet when the simple promise of easing (or using his tool) is enough to do the dirty work for you.

Why is everyone expecting something different this time? With the SPX over 1400 and economic "conditions" apparently manageable what's the driver? Why the hype? Well that is where the lies and smoke screen come into play. You see the BLS BS and all the other data manipulation has made things appear to be just less than rosy but not all that bad. Do you really buy the last GDP print? Combine that with the current market levels and they have printed and lied themselves into a corner.

So the lies that cover up the truth are now meaningless as everyone knows the country is literally rotting from the core. It is no secret that the economy is failing (no matter what their numbers tell you), and that easing will come. It is no secret that easing is now the only hope to keep the system alive as we know it. The markets now know this. It is literally a 100% certainty that the Fed will ease forever or until they have destroyed the dollar, which in turn destroys America as we know it.

So the Fed will ease. When is the question. This brings us to a new market dynamic that has never been experienced before. A market that is now more unreliable, rigged and dangerous than ever before. We've devolved from a free market where price discovery ruled and random walk worked to a manipulated, QE supported, HFT dominated, rumor driven market.

The 2010 and 2011 tops were basic. QE ended and the markets fell 20% and then QE saved the day. This time they have gotten greedy not allowing the markets to fail and generate the fear that they need to spend another trillion or two to support the system. Can the Fed ease up here? Sure they can, cause they have to. Will the fed ease without announcing it? Sure they can. Will the Fed ease even if it is the worst possible thing for the future of America? Of course they will.

I assume this all has to do with the elections. The Bernank is fighting for his job as well. The Manchurian Manbat needs elevated market levels, and that is what he's achieved. Can they maintain the market levels thru the elections? I assume that would be the goal.

What's coming? Well, a market crash and war are two very real possibilities before or very soon after the election. The war will either cover for the crash or vice versa. I'm thinking sooner than later. It appears that police state or control mechanisms are close to being in place for the civil unrest they are anticipating.

I guess it was about two years ago I forecasted they would not be able to carry the charade past the first quarter of 2013 ,and I stand by that now. If they want a disaster to happen they want it in the first year of a presidency (in Romney's case). On the other hand, the worst case scenario, O will immediately become a lame duck and will have free reign to implement his socialist agenda.

Technically the markets have been ready for about two weeks to top. They are set up for THE fall. THE fall as in the last top for possibly decades, that is if the markets survive the next crash and remain in their current form as we know them today. We're on the doorstep of historic changes in this country. Hopefully the people come together and can restore the constitution and remove the socialist agenda that is rapidly taking over our nation.

I'll do a detailed post and update the chartbooks when necessary. If you want to see charts, scroll back thru last and this weeks posts. Nothing has changed. All you will see is a range bound mess over the past month. Today the Bernank speaks, then the EU meets on the 6th (a far bigger deal) and then the FOMC on the 12th. That leaves us with two more weeks of uncertainty which should translate to more sideways action.

To those of you that want to see more charts and wonder why I have been bit nonchalant recently, I apologize. Remember I am not about hype or bullshit. I am about reality. There is literally nothing to see here. We are waiting on the Fed to announce their plans (or hints) to continue easing till infinity cause if they don't we all blow up. So, do you actually think the politicians, controlled by the banks are going to let that happen? Nope, they will burn this thing to the ground trying to save their wealth generation system (that steals from the poor and gives to the rich).

I am as tired of this crap as you are. The lies and manipulation are overly blatant. I warned about unprecedented intervention on the day (08/02) this last run began, and you can not stop believing that they will do anything in their power, legal or not, to protect their investment.

Minis 30m - As usual, all day I update charts and give commentary in the section below. If something happens (other than a major top call) you will have to read about it there (in the best detail on the web IMHO). The thick blue resistance off the 2007 top has dominated trade for a few weeks now. When the thick green goes the fall to my fav 1374 number will be the first stop. After that, look out. As for upside? That all depends on where the bots and the fed want it to go. 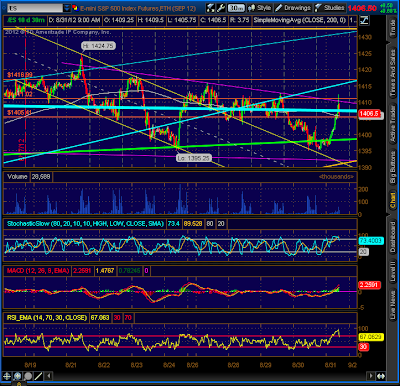