Top calling is a fools game, but that's what I do here at STB. As a market Sherpa I have chosen the path of greater fools. Fortunately my track record is (what I believe) one of the best on the web having delivered consistently accurate calls over the past three years.

The game has not been all that hard to call actually if you followed the Fed and the risk on/off trade. They ease and markets go up. They stop easing and markets fall. Technical analysis has for the most part been spot on with the moves. Most know I have used a combination of TA and following the Fed to great success. This time, this top, is a bit different though.

This time the Fed is not using "QE" they are twisting. This time is also different in the fact that the last two rounds of easing have done nothing for the economy (all the money goes to the banks and then into either the markets or lavish bonuses), and here the S&P sits above 1400. It is also quite apparent that they will must  ease again at some point soon.

So the markets after years of living in denial have finally figured it out that without the Fed's liquidity lifeblood they are nothing, so they have taken it upon themselves to go ahead and mostly price in this next round of easing. That's the problem, the Bernanke put or the perpetual backstop. When you combine that mentality with an algo/HFT driven market that is rigged from top to bottom, the only losers are the shorts.

So, oblivious to reality (employment, debt, yields, EU, MENA,  blah, blah, blah) the market chugs along extending and pretending on its hopim high knowing the backstop will always be there. How does the Fed manage this situation? That's a good question and one for another post.

I really want to call a top. I'm not sure if I have run out of patience or if my emotions are dominating my thought process. There is only one technical spot left (a divergence in CPC left to come for the complete formation to be in place. Everything else is ready and looks very dire. Apparently the most everyone agrees.

I called the top in April of 2010 within 24 hours, so I'll have a decision made by the end of the day. I'm pleased that I did not jump on the band wagon back in March (my condolences to all the EWTers that got it wrong AGAIN). Following the Fed has done me well. Taking a knife to a gunfight is never a good idea, kinda like trying to out guess the Fed. TA says were close and that the next fall will be tremendous. This top will be the top for decades possibly if not forever (to the system as we currently know it).

I'll do my best to have a decision on a op by the end of the day. My biggest problem goes back to my August second warning of unprecedented intervention and desperate actions by the elites. Their backs are to the wall now. they are cornered. In this situation, when they are most desperate, they can be the most unpredictable.

CPC - See the purple boxes. That is the only piece left and everything that signals a top will be in place. This is not necessary. It is just one of the many things I have found that telegraph turns. 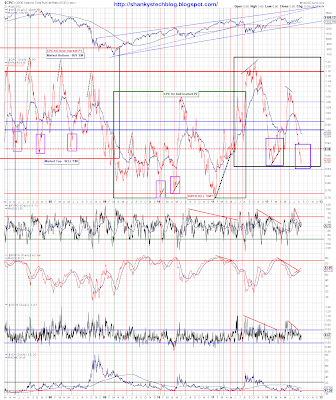 Bullish Percent - This is the worst divergence I have ever seen comparing BP to price. As evidenced on this chart, this set up is usually very telling of what's to come. 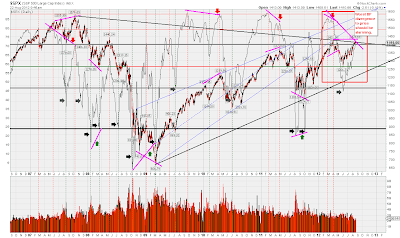 BTFD/STFR Chart - On it's 4th divergence, this is setting up a rip roaring fall. 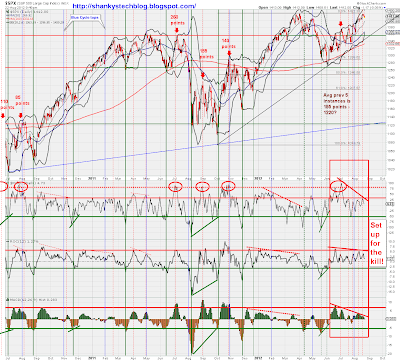 Minis 30m - That heavy blue descending diagonal is the upper resistance off the '07 top. That is being backtested here. 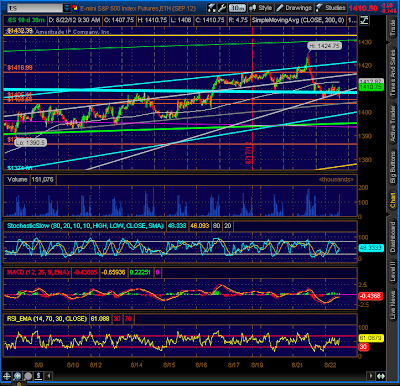 More on direction and intraday specifics below. This backtest is key and a level I will be watching very closely.