Something strange happened this morning, a rumor got squashed! What you say? A rumor did not cause a 15 point spike in the e-minis and send the markets soaring to new heights? That's right, the ECB print forever rumor was quickly shot down. Now that's amazing right there. The minis rose as high as 1418 and then began a 5 point slide indicating about a break even open on what appears to be slightly heavier overnight volume than in recent weeks.

Folks, we're in total wait and see mode. Between the EU sorting things out and waiting on Jackson Hole (and add the markets at highs) this holding pattern may be on another week. This little bit of bad news (rumor squash above) is definitely a change in course as this is just the sort of thing they would have let run for a few days to allow the markets to feast on the speculation.

Nut cutting time is coming. The politicians around the world are gonna have to step up to the plate over the next few weeks to deliver or else. Some are saying that the next round of QE/bailouts/never ending stimulus is mostly priced in at this point and I agree. This reminds me of the 2010 JH promise ramp off the 1040 lows when they announced in November and we got a sell off on the news.

I'm still working on the charts and a proper presentation. We're all over a top as you all know. I'm simply waiting patiently on a catalyst and this mornings action is a good first step in that direction. In the next few weeks rumors will be flying and decisions will have to be made (especially in the EU). How do they solve the unsolvable? I have no clue, but it will be fun to watch the politicians squirm and the banksters push till we get their results.

Remain patient traders. I contend we'll all see the top when it hits. It will more than likely happen overnight and be cause by something overseas. A catalyst will happen sending everyone running for cover.

Minis Daily - Upper thin blue resistance of the rising wedge off the June lows still acting as a cap on price here. Crossing the thick blue upper resistance off the 2007 top will only add to the pressure. 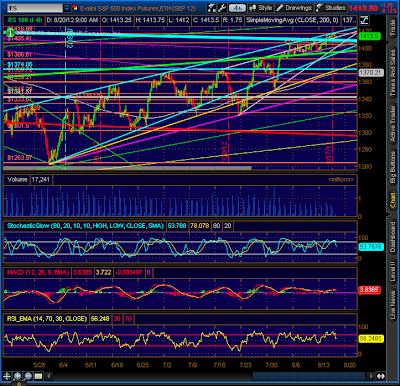 SPX Daily - I still think this is a blow off top and the reversal can now happen at any moment (it just wont happen without a catalyst - which is opposite to the ramps of course). Does price want one last shot at that upper rising blue wedge resistance? I don't know, but one thing is for sure, that is one big nasty double top and the economic deterioration underneath it combined with diverging indicators does not bode well for when this thing finally cracks. 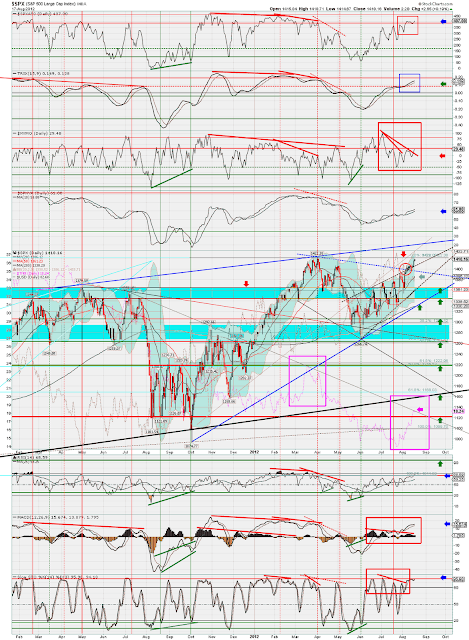 As usual I'll deliver more charts and commentary below with the usual fantastic support from the core commenters.