Waiting on the shoe to drop. Again, not much to comment on as I await a catalyst that can turn the markets. We all knew the rhetoric leading into Jackson Hole would be hot and heavy, and that the hawks would be few and the doves many. We all knew that this week's Greece talks would bring great uncertainty, but would at the same time bring promise of another extend and pretend move from someone in the euro zone. China is falling apart, but that simply brings hope of more bailout cash to hit the system. As for the rest of the PIIGS, well, you know the story.

So here we sit with everything crumbling down around us and all they can do is promise more easing will come if necessary and the markets celebrate. Yes, folks, it no longer matters what condition the country is in or the condition of the global financial markets. The only thing that matters now is will they ears or not. Heck, in the EU they are now resorting to openly secret plans, now that's irony for you. Uh, you know the answer to that one right?

I just wait on my catalyst. I have not called a top, yet. I expect to. With Greece and JH dominating the news there could be one last large news bite to pop price one last time. As mentioned, this reminds me of November of 2011 when the promise of easing came from JH in August and when they confirmed in November we got a sizeable sell the news event. Of course they then ramped it to 1420.

The past two mornings have demonstrated that the bears are in the house and are looking for a fight. The question is did they bring a knife or a gun? If a gun, they better call the DHS, the National Weather service or the Social Security Administration if they need additional ammo. They all got about 1.4 billion rounds of hollow points all for domestic use!

Minis 30m - Blue wedge rising is coming to an end. Blue wedge breaking the upper market resistance from 2007 (heavy blue) is an extreme move. Overthrowing the upper blue rising wedge (current formation) resistance adds to the extremity at this time (like really extreme). That's where we have been for the past 5 days. As mentioned, anything above 1375 is in a zone that lacks life sustaining oxygen. Support points are all over the place. There are three strong support diagonals that have formed over this ramp. That said, the gaps between those major supports are wide and could lend to some quick moves south if the bears can get the ball. 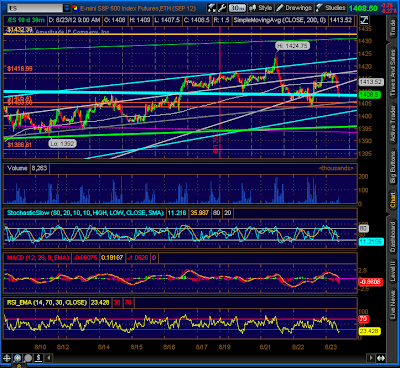 Monthly index comparison - Just making sure you can clearly see the extreme levels the markets are experiencing. I encourage you to ask yourself, why? 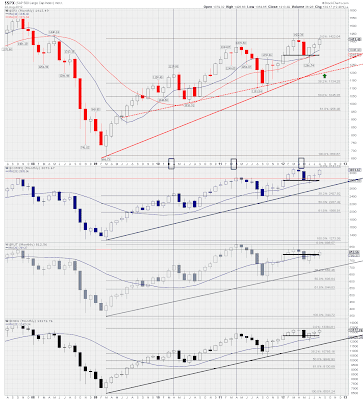 Daily index comparison - Another broad look at the majors. Trannies and the RUT are not happy. The bigs led into the last ramp. I prefer to see these all bunched up leading into turns, but that may not happen this time. This looks like a real top. 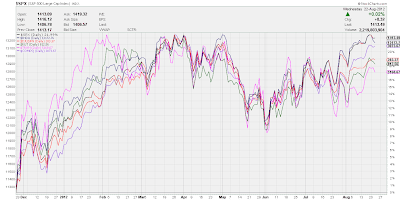 Tomorrow you get the long awaited chartapalooza covering everything from the dollar to gold.

Waiting on my catalyst. War, Greece, PIIGS, China, US, whatever, the possibilities are endless at this time, but the markets continue to hover at the highs. Go figure in this wacky thing they still call a market. I continue to recommend, as I have basically all year, gangsta style, hit and run scalps. Take what you can quickly and with protection, scalp it long or short and get the heck out.

Momo will turn. We will all see it I suspect. Then the bears will feast. You just have to remain patient and let the trade come to you. Remember in this centrally planned manipulated POS market the only thing that must happen is what the Fed and the elites want to happen.