I really don't have much to say this morning. I am, I believe, close to actually pulling the trigger on calling a top. I guess that is some news. Top calling in this manipulated POS they still call a market has become a fools game. Thus far I believe I am the lesser fool than most that play in this arena. I have only called two tops in the history of the blog, so this is serious business for STB.

I did not call a top at 1420 in April. Price here may not eclipse that number and thus I may technically have missed the mark, but having price move back above 1400 here I don't consider it a failure either. Bottom line is the Fed is in control. It was plain to see that QE to infinity was in play and as you well know QE is all that matters.

I still contend that technical analysis will get the call right as the hard numbers never lie. Price, no matter how manipulated, is supported by underlying technicals and when those slide or diverge even (or especially) in a rigged market the weakness will prevail.

Top calling here has become more difficult as the rampant manipulation of price via HFT, hopium, QE, Hilsenrath or Draghi rumors or what ever the MSM is told to feed you about the "recovery" defies the underlying economic reality. I bought into the follow the Fed mantra a few years back and have preached it every day here at STB. Now that time may be coming to an end.

Searching for the top is extremely difficult and only the Fed knows when they will throw in the towel. Well, that's how they want it to end, but what if it ends out of their control? As most readers know back at the beginning of the blog three years ago I called for an "event" the will be out of "their" control" to end this debt ridden nightmare. IT appears that is the only thing that can stop the corruption at this time.

Past tops have been relatively easy spots. They end QE and the markets fail. No liquidity = falling stock markets. Same for the major bottoms, as the fear of total collapse ensues and the cries for intervention roar out the Fed comes to the rescue.  Additional liquidity (QE) = rising markets. Today we're in a bind as the greedy Wall Street whores either don't want to experience another drop and want price to accelerate from here, or they fear another fall may not be contained.

So, today's biggest question is can the Fed ease or will they with prices at these lofty levels. Can they rationalize the need? Maybe the bigger question that the street is ignoring is what will be the consequences of more easing as the extend and pretend crowd cares nothing about the future and only about today's gains?

I do not know the answer to those questions, but I do know that there is nothing but hot air supporting price now. Since last August (I was one of the first I believe to propose this) I have contended that they would manufacture a crash in order to make the next round of easing more accomodating. In other words, fear needs to permeated everything before the fed pulls the trigger again.

Let's see what this next week holds for the markets. TA has a nasty way of predicting horrific social or economic events. One should be coming in the next few weeks I would think. This top will be the last. It is THE exit point for the longs as the next round of QE or saving liquidity or the last shot of hopium will NOT bring prices back anywhere near these levels.

As for the charts, see yesterday's post for all the technical analysis regarding the top that is forming. My top call post will be very noticeable when it happens. It take a lot to get me to discuss tops folks. To me this is serious stuff and I'm not bluffing (most know I don't hype anything). I'll continue to watch the Fed and market action closely for clues. As I mention daily, I am waiting on some sort of catalyst to turn the tide. When the turn comes it should be painfully obvious.

SPX Daily - SPXA50 finally crosses the 400 marker. That was one of the last pieces of the puzzle I was waiting on. 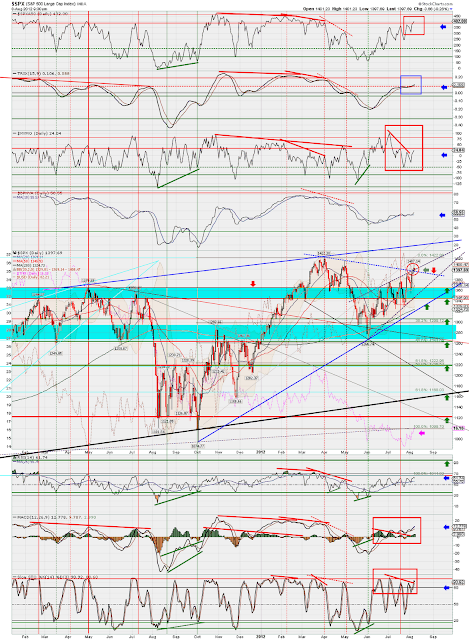 Minis 4hr - The last three times price hit this upper blue wedge resistance it generated a minimum of a 50 point fall. They ran it to the round level. Like a bird dog when they get near the prey they tend to get very ambitious and go for the kill. Now the last top is in sight. Will they go for that ring in the sky as well? That is something that you need to consider. 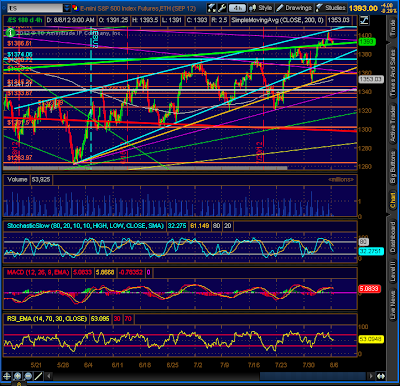 I should be breaking out the Duck and Cover theme here soon.