Let's do a quick review -

Let's briefly discuss the Bernak's tool. Just how large is it? Are we talking Dirk Diggler here? Size does matter, but too large can be a detractor and will ultimately destroy performance. Of course I'm talking about his printing press. I hope you were not thinking about anything else here. Continuing to print will enlarge the debt (if it has not already) to a point that nothing but pain will, arise with each additional thrust from the presses.

Sadly the economy's path and that of Dirk Diggler parallel each other. A massive good time of passion and exuberance leading to total disaster. Sadly no one realizes or can see the real issues, because they are blinded by the drug called hopium that is pushed by the government and MSM. Reality bites and the vast majority of us live in total denial. Those that can see the truth and the pain coming have a massive advantage.

So, does the master hopium pusher wield his tool again tomorrow? Can he engorge more fiat into the already swollen pile of debt? We do not know, but the fate of the markets solely depends on whether he can keep his tools erect or not.

Minis 60m - No real need to comment on the charts as they are all primed for the fall. A month of nothing is leading up to this next few pivotal weeks. If the Fed is going to crash the markets to make easing more accommodating (a point STB was discussing well over a year ago before it became mainstream), they better do it soon. 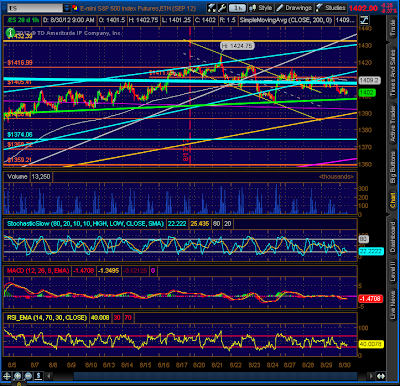 No need to get into any detail till the Bernank speaks tomorrow. A Friday before a holiday weekend? Hmmm, I'm surprised the bank holiday crowd is not in a frenzy. As usual, I give ultra chart detail analysis as the day goes in the commentary. Right now anticipating anything up or down is a dangerous game.

As I have said all year, follow the Fed. Let them tell you what they are going to do and then invest accordingly. Gangsta style trading, hit or scalp and run, take your prophets and get the heck out.

Do not fight the machine. you will lose. Follow the Fed no matter what you know is right. There will come a tile to bail and that moment will be seen by all. Till that time, team manipulation is in total control of every tick. Do not forget that.