OK, this is getting a bit out of hand, two shootings and now a refinery fire. The Sikh temple shooter was a former Army psyops specialist, am I about to go bit far with this? (of course I am) What's next, a war? I'm not sure how to react to this one as a shut down refinery may be the thing that could push the consumer and economy over the edge. Whoa, whoa, wait, the calls for QE3 would be louder than ever.

I may be on to something here - could this be a manufactured terrorist strike on ourselves? Are we the largest sponsor of terrorism on the planet? How about that, and guess what, they did not have to crash the markets to get the fear QE trade up and running. Brilliant! I can see the Manchurian Manbat right now teleprompting this as a good thing to get thousands hired (and then outsource the job to a Chinese outfit). Bottom line is this being an inside job really fits the bill right now given the position of, well, everything. You should actually expect a rash of incidents like these in the coming months as the crony capitalists are finally out of bullets facing he end game.

Now about these markets, unprecedented intervention is upon us right now, right at a time when the markets are setting up for a nasty spill. Now, where is the catalyst to get a sell off going, something large enough that can fend off another Draghi lie or another perfectly timed Hilsenrath QE rumor? Will this refinery issue be large enough to spike some of the worst fears? Wait, aren't we living in a world where the worst news is the best news for the markets? What's it gonna take? What could be a catalyst to get event the largest insiders to begin selling? I have no clue, but it will have to hit them where they can't defend against it. (Euro blow up)

My Weekly Indicator Chart is looking pretty ill here. This rarely happens (and the daily chart has been embedding in overbought territory since mid June) and the set up generates a nasty turn in price. Here is the problem, the Fed sees this as well. There again we run into another issue where bad could be good for price. The movement recently has been one that has all the characteristics of a blow off top, a market running wild. Again, what will it take to turn this out of control beast?

My BTFD/STFR chart is off the charts fugly - 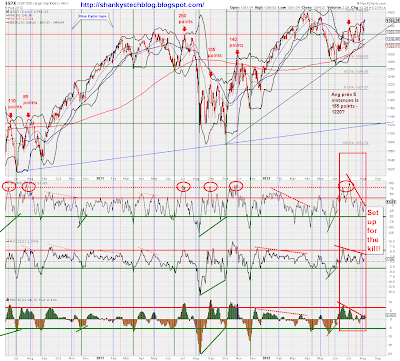 CPC is finally at a point where a sell signal is being generated. 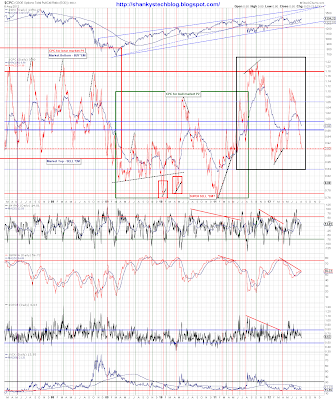 SPX Bullish Percent - this is the nastiest divergence I have ever seen on this chart. 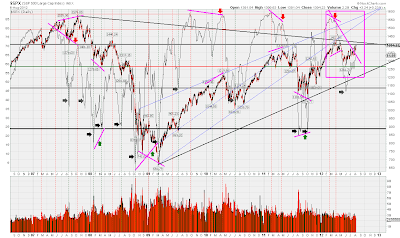 SPX Daily - Finally the trifecta is confirmed with the SPXA50 approaching 400. That is the level that generates overbought reversals. 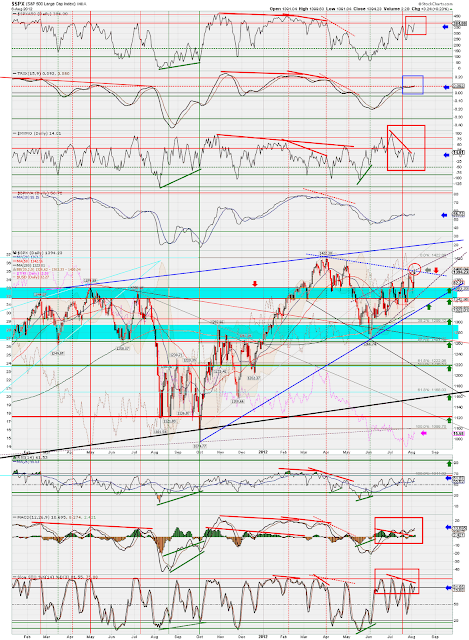 A month ago I was confused about what the charts were saying. All the pieces were not in place, but certain things were pointing to a sizable sell off. The charts are all clear now (and the bond market is moving into place as well). All that will be required from you is patience to allow the turn to come and for this irrational exuberance to wear off. This blow off top will pay off eventually, just like the previous ramps close to the tops in '10 and '11. We just need to sit and wait now as the intervention is running rampant now.

What will the catalyst be? They will not just let it sell off. What can end the hopium induced coma? Whatever it is, it is coming soon I believe. Till then continue to scalp long and short and don't fall in love with one side or the other. I believe we'll all know when the turn is real. We need a dramatic reversal candle with some gaps down preferably. I'll add (unwillingly) that the VIX (yes, it is busted and represents nothing) appears ripe for a turn as well.

As usual, I will add charts and commentary below. I'll do a chartapalooza this week as well.