OK, so things are not adding up. Should the Lemmings be running in or is it that all the Lemmings have leaped off the cliff? "Investors pulled an estimated $132 billion from mutual funds that invest in U.S. stocks, the fifth straight year of withdrawals for domestic funds, according to preliminary data from the Investment Company Institute, a Washington-based trade group whose numbers go back to 1984. Withdrawals reached $147 billion in 2008 when the Standard & Poor’s 500 Index fell 37 percent, including dividends." U.S. Stock Funds Have Second-Worst Year - Bloomberg

Who or what is left comprising the markets these days is quite the mystery. We know the MF Global clients are out, but their money is still in (somewhere - no one seems to be able to find a billion dollars of "lost" investor funds). We know that there are trillions of QE dollars still out there. I really have no clue who or what outside of the Central Planning cabal's tentacles is in or out of this market.

STB discussed data manipulation and the ADP numbers yesterday. The jobs report was a healthy surprise this morning. This is another topic not really worth addressing as factual data is non existent. Yet, we have to address it because the sheeple lemmings are fed false misleading positive data. That data's sole purpose is to get them to believe all is well, and they should continue to pile their funds into the broker dealers so they can invest those funds so the sheeple can retire securely they can make billions in fees. If you believe a sub 17% real unemployment number you can leave the blog now and not come back.

What has really become another non event (just like every other data point in the universe except the price of oil and gold) is our debt ceiling. Here We Go Again: US $25 Million Away From Debt Ceiling Breach | ZeroHedge. This pic is about a year old (sorry I can't find an updated one), but you need to add another trillion to the list below. Surprised? You damn well better be (if you are not a regular reader here). What those numbers represent are your journey into debt serfdom at the expanse of a runaway train called the Fed/Treasury/Government/Wall St./banksters express. WAKE UP AMERICA! You are taking it up the rear and don't even realize it. When reality strikes it will not be kind. 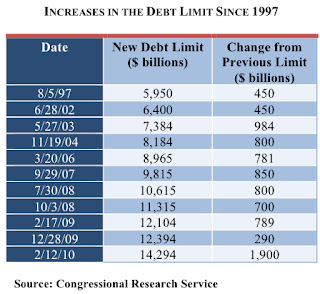 This borrow and spend crap is still going on. Everything that got us into trouble in '08 is still going on (if not worse). They are papering (fiating to be exact) over the problems. Don;t believe anything you hear or read about the jobless recovery. This spending to fill the void while nothing improves economically or fundamentally (both are still headed int he wrong direction as they pick up speed) is a farce. They are fixing nothing and the debt burden just keeps on skyrocketing. We're in serious trouble and you better realize this.

Earnings start next week. Lord knows what the lax FASB, low hurdle estimates will bring. The banks are sure to use Repo 101 to pad their assets to make them appear solvent. Sales numbers for the holidays from TGT and BBY were pretty sad, but I'm sure that will not have nay bearing on anything. As usual I will hold my breath for the first three weeks and then use that data and forward guidance to get our game plan for the next few months.

Right now the 60m divergences I have been showing for the past week are really screaming sell setting a smaller sharper negative move yesterday which follows a longer term of weakening data points. The daily charts are also setting up for a pretty nasty tumble as well. The two main issues are earnings and the FOMC meeting in late January. Can they keep the markets up into that meeting as the trends in the recent past indicate? If so, it will be a phenomenal short set up.

Another thing working for the shorts is the CPC. If this continues to plunge, then that combined with divergence in bullish sentiment may produce another 10 to 20% plunge in the indexes sooner than later.

Right now I'm leaning south near term with a 1235 target, but that is not written in stone. I'm preaching caution and patience. The markets have shown amazing resiliency and the central planners have done a great job sucking in the shorts. The SPX minis almost hit 1257 support yesterday then rallied on no news. There is a nice battle going on up here between the bulls and bears. This run is tired and I'm not sure how much the bulls have left in their arsenal. SPX 60m - 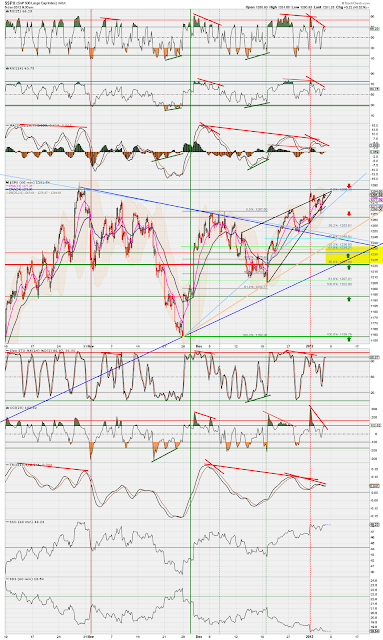