I think I have a FOMC hangover. Like I got absolutely pummeled yesterday on hopium and am waking up today wondering what the hell happened while I was passed out. It was a normal day and then the Fed spiked my cocktail. Then this euphoric nightmare happened. The Fed spoke of ZIRP to eternity and conditions that warranted serious monitoring, but thru all the warnings and awful news this angel appeared. I thought it funny she had a pitchfork, horns and a tail, that's meaningless. She brought 'accommodative policy' with her and all of a sudden the skies turned bright, Wall St. rejoiced and all fears of market weakness were immediately erased.

When I finally came to, I realized this was not a hallucination or a dream. It is the new reality. A centrally planned crony capitalist cleptocracy now rules the globe. Nothing matters anymore other than maintaining the markets lofty levels while the wealth transfer from the poor to ultra rich accelerates. Whether right, wrong or indifferent it does not matter.

I've explained this for years now and you have to listen and believe. All that stands between the government/Fed/crony system and the public going totally ape is the illusion that the stock market is healthy and your wealth (what's left of it) is just fine, growing and safe. A failure of the stock market leads to the failure of everything at this point. From the complete pension system to what little privately held wealth is left, they are hanging on by any means possible at this time, cause when the markets go, so does everything else.

I am still taken back by their audacity and the fact that this is actually happening to America. The special interest controlled congress has effectively deregulated everything and the horses are out in the pastures running wild. While we live in a society with ever increasing controls and laws, the crony capitalists represent a Teflon Don (Corzine) that can do what they want without fear of any repercussions. Whatever it takes no matter the cost to keep the system going is the only rule for them now.

One of my constant themes has been to follow the Fed. The Fed made it clear yesterday that they will continue to use whatever "tools" are necessary to keep the system running. ZIRP and easing are their only "tools". How friggin hard is it to run the printers full bore 24/7/365? This will all end one day when printing and stealth easing finally catch up to the system and the farce literally explodes in their face.

It is apparent now the EU has begun the unthinkable and unconstitutional printing as well. One has to ask, where the hell does all this money come from? Market watchers here must now change their focus to the euro zone and what happens with the Greek/Portugal/Spain bailouts not to mention the rest of the zone. With all the funds flowing to the banks and back to the ECB, one does not has to wonder how literally unstable things are over there. March 9th is the next EU summit that will fail to restructure or solve any of the unsolvable issues over there. How long can they keep the ball in the air is the only question.

As for global trade and economic conditions you only need to look at one chart and read this post Baltic Dry Plunges 42% More Than Seasonal Norm To Start The Year | ZeroHedge. "Whether it is an over-abundance of ships (mis-allocation of capital) or a slowing global growth story (aggregate demand), the crash in the Baltic Dry Index has been significant to say the least. Seasonals are prevalent (and Chinese New Year impacts) but to try and clean up that perspective, we find that so far this year the Baltic Dry has fallen 42% more than its seasonal normal and is down by more than 50% since 12/30/11. Nothing to see here move along."

BDI SPX comp chart - This is not normal and may possibly be the most glaring chart indicating market manipulation there is.

Regardless of the Fed's actions STB remains in market is in a topping process mode. the technicals do not lie and will as they always do lead us to the truth. Markets can and do remain unrealistically overbought for extended periods during  easing "moments". We just have to remain patient and wait them out. I believe at least a corrective is coming sooner than later of some sort.

SPX 60m - I have already presented the black wedge scenario where we fall for D and back up for one last move to the top. Will that be the play? It all depends on what the EU comes up with to keep their life support system running. Patience remains the word of the day. Let them reveal their plans and release road marks in the future that we can key on. 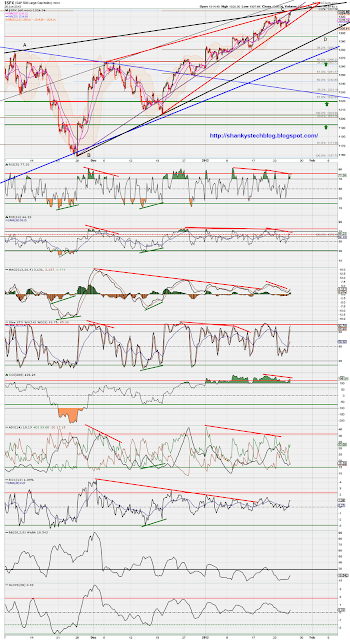 Minis /es 30m - The red resistance diagonal runs off the 1586 '07 top and the 1373 '11 tops. That is my key point. Right now I'm on this is an overthrow of the greed rising wedge. 1332 should be the max. Note I moved this diag up late yesterday to accommodate just the tops. 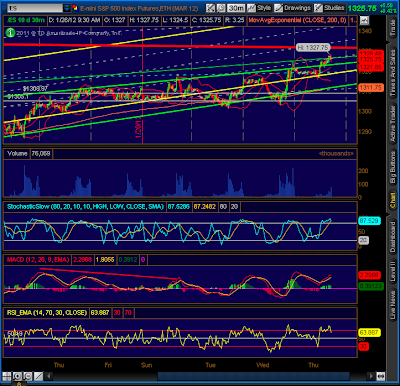 As mentioned, the form of the fall will be key. I do believe this will be a sell the news event similar to the QE announcement of November '10 at this time with a last possible run to a top to follow. If not, the fall will be horrific. Either way their games are ending and they are losing control. Remain calm and patient. Let the trade come to you. If you bite, have a plan and always use stops. Discipline at tops is very difficult.