Well, the minis got a higher high last night and as discussed here over the past two weeks the trend up into the FOMC meeting (as markets tend to do) remains intact for now. Stopping 2.5 points shy of the 1300 round level, the minis pulled back on the data this morning. Jobless claims get back to 399k (which will be revised over 400k as is the standard). Gee is that a surprise to any of you reading this? EU rates remain unchanged and they did not ease but will most likely begin printing again in February (thus the pop in the futures).

So, The jobless claims increase 25k and the markets pull back all of 7 handles? Really? That should have been a 20 point thrashing as the "recovery" takes another body blow. I'm sure our president did not like hearing that news. This also makes me think that whoever controls this number would like a new leader for this country after this next election (you have to connect all the dots).

My morning post yesterday was really the most comprehensive market position chart you will find on the web for this time. Everything in it will remain in play for at least another week if not thru the FOMC meeting and OPEX as these markets churn out this top. My Is Gold About to Collapse? post yesterday drew quite a crowd. You may want to see that one as well. It ties nicely to a potential coming collapse in equity markets.

Next week will be a huge week for the markets as it is a really big week for earnings. This is about the only thing that can derail my march to the FOMC meeting prediction (and opex). The question is did the analysts (that are in on the markets rise at all times game) set the hurdles low enough for easy beats or meets?   What types of revisions and forward estimates will be set? You have to be thinking that while earnings may be neutral, the forwards will be miserable. Warnings are coming across the boards now that should have investors concerned (see WSM).

Let me explain a bit about earnings - they used to be real. There used to be a thing called an earnings cycle where the natural ebb and flow would cause natural highs and lows that would result in natural beats or misses. Now earnings are a purely controlled event where guidance is continually lowered (like thru the quarter and year) so the number becomes attainable. Stocks do not suffer due to these lowered estimates like they normally would, because QE rises all tides no matter the news (INTC is my favorite example). Thus price remains stable and the hurdle remains low allowing ...prices to remain stable.

Wall St. is in on the action. They want asset levels to rise so they can .....collect more fees and profit on rising equity prices. The analysts are in on the game and are part of the larger corrupt monopoly that controls everything market related. Don't think that the analysts are the only players in the game. The Fed, Treasury, Government and others all have an interest in maintaining the illusion the markets create that all is well. It is a massive game/cover up of the truth that our economy is collapsing.

60m minis this morning - The second divergence is upon us. The non traditional yellow channel support I have been showing for a couple of weeks now is in tact and is all that I am watching to key for downside action to begin or to signal that the top is finally set. When that cracks I will let you know and then we can start looking at some downside targets (which go pretty low). While the upper channel resistance could still be in play, and I have potential targets that reach to the 1310 area it is beginning to look like climbing to that point is not in the cards. 1277 level will be my second key a more meaningful fall may be in the works. 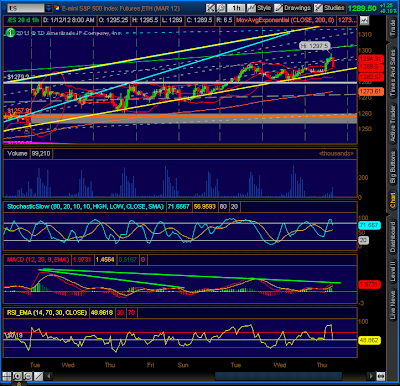 What could stop a move south here? Well, you tell me what rumors start flying just ahead of an FOMC meeting? That's right, QE rumors. Remember it does not take factual information to make this market pop. It only takes one well spread rumor. With the nation over the debt ceiling again and in need of more cash (they already spent all but $300b of the funds that were supposed to get them  thru the election) the QE discussion will not be going away.

Remember to tweet #goodmorning and later #goodnight to your homeland security handlers. They are watching everything you do now. You might as well make them feel comfortable while doing their jobs. Since this blog has discussed bird flu (Whoops I said it) they will be watching you here as well so get used to hit. OBTW - hello handler. Have a good day!