As usual, I only report on what the charts say, nothing else. If you can keep up with the news flow on AAPL be my guest, just check the twitter feed here Twitter / Search - aapl. Revolutionize this or that seems to be the common theme.

I can't argue with them as I love all my iProucts. We did get nooks over IPads and that appears to be working out just fine. Friends have switched to androids from iPhones and those seem to work just fine. Apple seems to be losing some of their dominance on the sector. Is the competition catching up? Who knows? I do know that this company has done incredibly well on the backs of a few products. They do dominate the industry. There is room to grow as the egg throwing Chinese are proving.

I do know one thing, technically on a monthly chart AAPL has begun the dreaded second sharper negative divergence. It is also the only equity with an overbought MACD that rivals that of gold. The rising wedge is ending.

AAPL Monthly - The rising wedge is clear as day. The lowest blue diagonal is a traditional wedge target diagonal once it breaks. 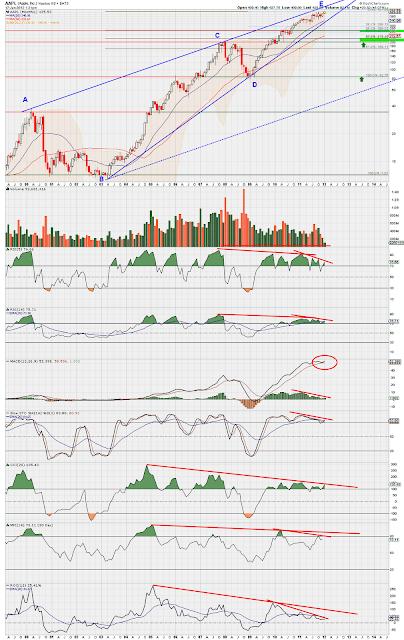 AAPL Weekly - Overbought with weakening and second diverging indicators. Nice channel on this chart off the $80 lows. Support areas are the green arrows. 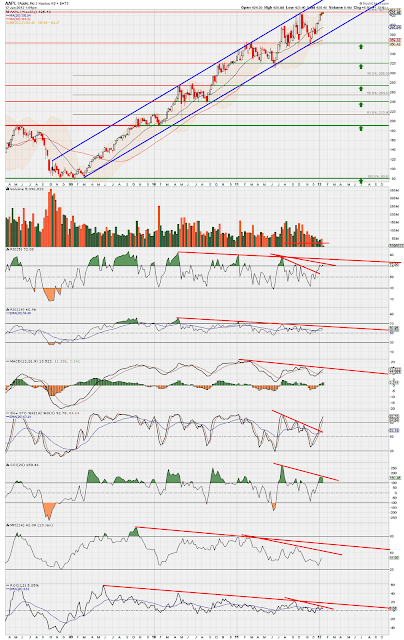 A closer look at the potential triple top on the daily chart. Gaps are in yellow. More divergences indicating weakness. 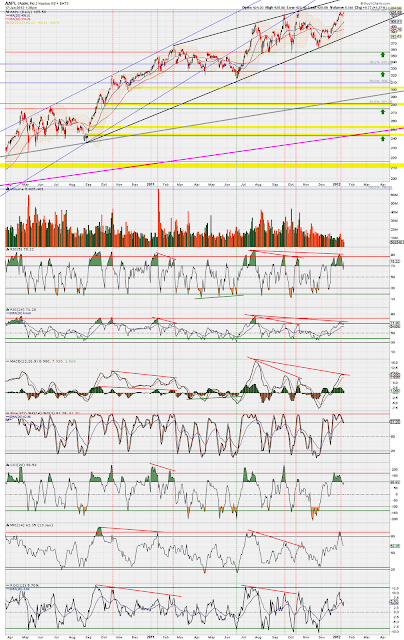 First, you do nothing before earnings are announced. I'm not sure AAPL will come down on its own. It will need some help and it will get help sooner than later from the broader market. AAPL actually rose during the July/August swoon last year, and in the November swoon lost roughly 90 points.

AAPL announces next week in line with the FOMC meeting. These have been points where the markets have topped and had some nasty turns in the past. A good earnings pop may be taken right back when the Fed does not ease (again).

Betting against AAPL has proven to be a fools game thus far. Do the charts tell of an impending "issue" to come with the tech giant? With the passing of the magnificent Steve Jobs, do they have the leadership to overcome any impending adversity, or did the company's heart and soul die with him? I'll be watching patiently waiting for a moment to short. It may be next week or it could be next year. One thing for sure is technicals don't lie and this puppy can't levitate forever.
Posted by Shanky at 2:16 PM