First let me get this off my chest. To me this is the travesty and a very dark part of not only the markets, but this issue also represents everything that is wrong with our country and the future. GE beats! Why is that such a problem? Because Obummer's Jobs Czar the head of GE sends something like 10,000 of GE's jobs overseas (and those are the ones we know about). So GE gets rewarded for a beat all the while not supporting the country for profit? I don't think so, they should be taken out back and given 20 lashes. Stuff like this really ticks me off. There are so many things inherently wrong with that situation at this time. It is disgusting.

On to the markets - I'm looking for momo in the fall. Momo or a real break south with volume (that is the only time it seems to show up these days) and then for some key support levels to go. This should be a really aggressive move if the set up plays out. On the board here at STB and some major forecasters (we spoke of it first) are noting the fear and unease that surrounds the markets at this point. The central planners are to some very afraid of something and have been protecting the markets.

Many are very frustrated with the markets right now for not falling. I can fully understand. The charts have been prepping for a fall that seemingly will not come. Last week and this Wednesday I posted a full chart review of all the key data points that you need to see (IMO of course not that others don't exist - we all have our own keys). This post is well worth reviewing and has links to all the chart positions currently.

At the 1304.5 top I started getting a bit giddy about the markets nearing some sort of top, but still did not bite. Form of the fall as I used to preach (and mentioned above). That will be your key. Most likely a massive unmistakable candle like you have not seen in a few months will be your key. Yesterday at the 1311 top I gave this in the commentary (which for you readers that never go there is where you find all of my intraday calls).


"Little double top here on the minis at 1311. On cash at 1315 as well. Divergence is pretty strong on the 5 - 15m macd and the 30m macd is overbought and about to bear cross. 30m SS and RSI embedded since late yesterday. Based on the lack of enthusiasm on this mornings move (similar to the fall last Friday) no one is buying it.

The 30m candles on cash are really strange as well - every 2hrs there was a 30m spike then nothing. See the pattern for yourself. This pattern busted today and the candle now should be spiking but is not (actually black at this time).

This puppy is way overbought near term (looks like a blow off as I mentioned earlier). At this time I speculate any fall will happen after hours where it can be defended against (or controlled) and where you can not participate.

I'm sidelined and not even looking for a scalp till something happens. I'm not looking long either at this time. I'll remain patient. It does look like some sort of turn may be about to materialize. 1295 would be first support sub 1300." Shanky's Technical Analysis and Market Commentary: Morning Post 01/19/12 (SPX)


I've taken this FOMC chart and walked the markets up into it. Why? Simply cause it is all about the Fed and markets rarely fall moving into and FOMC meeting. Rallies continue to run right up to them. Just look at all but one instance in the chart for rising markets.

That chart has been money in the past and has proven its worth again since the beginning of the year. I'm still not in sell mode although it appears the 1311 top was possibly it. We made it thru opex now, that will open some doors for the bears. We still have to get thru the FOMC runors, AAPL earnings and the ever struggling Greek PSI agreement.

Daily SPX - Last night's AD post had some jammin charts in it as well. The markets are just about ready to fall if not there. The one problem with that is the Fed and the central planners. Nothing happens without their permission. that may led to this fall being not all what everyone is expecting (but that is for another post). 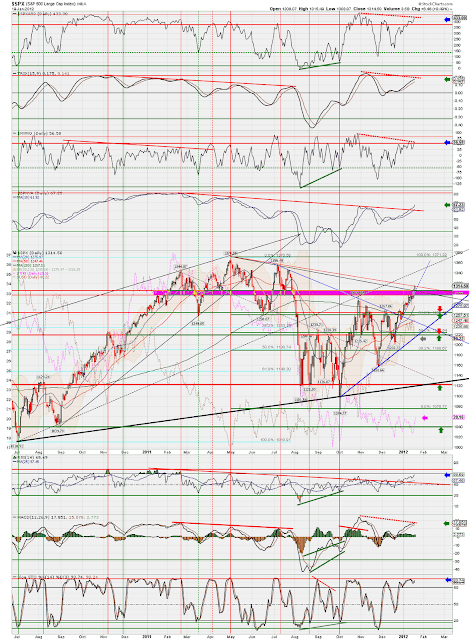 Minis 4hr - STB has followed up the yellow channel in this chart for over a month now. It has been golden. Now the channel is breaking support and a classic rising wedge (bearish from bullish) has formed and is playing out as the markets attempt to roll over. 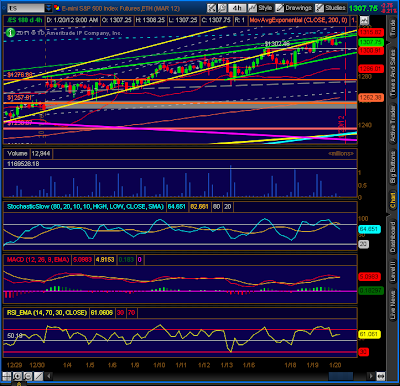 Form of the fall folks, Not till this things gets some momo south will I waste my breath speculating on downside targets. I will say this, the form of the climb has left a gazillion of them. Start with the round level of 1300 and then we'll work from there. It should fall in 20 point chunks the way it rose (if not faster) 1277, 57, 37, 17 should be the key areas at this time.

Thanks for all the support and comments. Again for those that do not read the comments, this board rocks and has a lot of really bright traders throwing their stuff out below. Read 'em and join 'em if you like.