Welcome to the Friday the 13th edition of the morning post. That alone should make for an interesting day, but when you throw in the minis taking out support and a JPM revenue miss, things quickly become more superstitious. Can you think of a better day to start a major slide in the markets? Remember, Monday is a holiday.

STB has been patiently waiting for the minis support to crack. Since first showing you the channel back in December and the FOMC meeting chart, we've been walking this puppy up one centrally planned stair at a time. The news is not good out there on many fronts, but that had all been subdued for the most part. It was only a matter of time before something caught up with the low volume quiet news grace period that beganthe year.

Following the dismal jobs number yesterday (399k to be revised over 400k next week) JPM now induces a dose of reality into the scene. For those that remember the farce that was the third quarter earnings for the financials, that ghost is coming back to haunt those that twist the rules and balance sheets. "Also, what DVA giveth, DVA taketh away, and with CDS tightening in the quarter, DVA resulted in a $567 million loss in the quarter. Yet even with the DVA impact exclusion, revenue, which was reported at $21.47 billion would still have missed estimates of $22.56 billion." JPM Misses Q4 Revenue, EPS In Line, DVA Loss Of $567 MM, Big Drop In Investment Banking | ZeroHedge. This is more than likely the beginning of the end for the big banks.

On a much more important note apparently everyone is dumping US treasuries. ""The question is what they are converting the USD into, and how much longer will the go on for: the last thing the US can afford is a wholesale dumping of its Treasurys. Because as the chart below vividly demonstrates, the traditional diagonal rise in foreign holdings of US paper has not only pleateaued, but it is in fact declining: a first in the history of the post-globalization world." Foreigners Sell Record $85 Billion In Treasurys In 6 Consecutive Weeks - Time To Get Concerned? | ZeroHedge.

Want more? Eurozone Sources Say Several Countries May Face Imminent Downgrade By S&P | ZeroHedge. With rates where they are, this is not welcomed news (but well deserved).

So, only the JPM news will rock the markets this AM. The S&P downgrade is just a headline for now, but will add to the jitters. The treasury sales are the worst, but markets will ignore this (well, not the smart ones in the bond market).

What did I mention yesterday? What happens as soon as any bad news hits the wire and also as we move closer to any FOMC meeting? Say it with me now, all at once ...QE! Good class, you are learning. The QE rumors begin right on time. CNBS discusses this AM the "unwinding of the Fed's massive balance sheet". The problem with that is they (along with you and me) own some of the most toxic and nastiest shit on the planet that you could not sell to a toothless man deep in the Appalachian mountains. No one wants this crap (yes, the same "crap" that congress scolded the big banks about back in 2009 - it all still exists folks)

You need to read this. It is very important. Is The Fed's Balance Sheet Unwind About To Crash The Market, Again? | ZeroHedge Read it twice if you don't get it the first time. This is the Fed trying to sell all the toxic hot potato shit that got everyone in trouble in the first place that has now had all sorts of bets placed against it. Our closets are jam packed with this stuff.

As for charts this morning, just two that matter -

First the magical minis chart - There is the yellow support diagonal and it is cracking far worse than on any recent move. 1279 support is just below. The next major support would be 1257 and gap support. 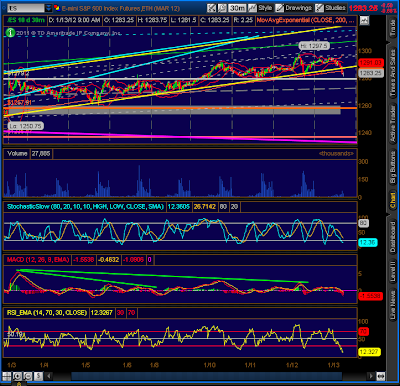 SPX Daily - Well price ran into upper resistance zone (pink area) and the upper resistance diagonal. Weakening indicators suggesting the strength under this move was waning. We've all been watching and waiting for this move to come. Now, can the bears make it stick. If so, a 3rd wave is upon us. It will be horrific and fast. If I am right and this is a third, somewhere in this move I have predicted the first of two market closures will happen in the great fall. Of course I am still looking for 1040 and the net big intervention to save this fall. 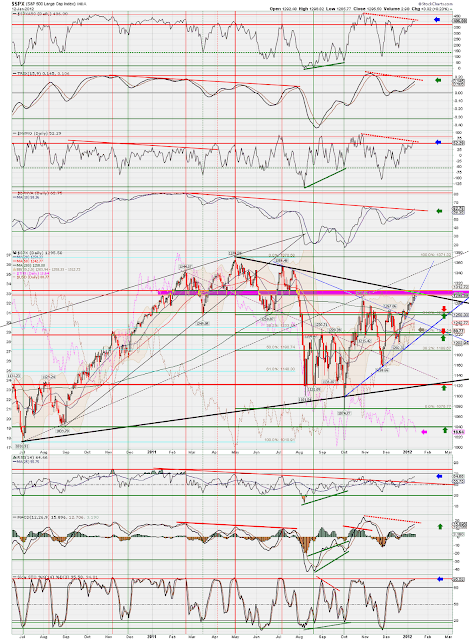 My concerns as a bear - the QE rumors running into the FOMC meeting, the upcoming opex and any possible earnings surprises (which look unlikely at this time). As I always caution, a backtest of busted support should be expected. 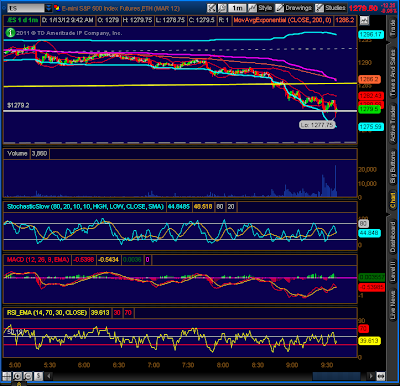