Strange Days indeed! So Standard and Poors downgrades basically all of the EU (and then the banks get follow up downgrades) and the markets go up? Citi misses by a mile and the markets barely flinch? Look, I don't get it, but there is one thing that  matters to the centrally planed markets driven by hopium, the eternal promise of more easing that comes with each FOMC meeting. That's right, every bit of bad news is received with cheers and market pops these days as they only increase the chance of more easing in the future. That's it, easing (Quantitative Easing to be exact), stimulus, a cash injection to the system that causes markets to mysteriously rise to heights usually seen in a bubble not a depression recession recovery.

What's going on that's so great the DOW runs up 60 points today? It must be that we're over the debt ceiling again, out of money and for a second time our government is having to "borrow" from the retirees pension plan to keep the doors open. Treasury Resumes Pillaging Retirement Accounts To Fund Deficit Spending Until Debt Ceiling Raised | ZeroHedge.

Let me explain what happened last time this happens and why it is directly related to why we ran out of money so fast this last time additional government funding was approved. When you borrow money you have to pay it back (well, to clarify in this unusual case where something actually gets paid back, in the case of your workers retirement plan that is). We ran a deficit, so when they approved the $1.2 trillion a wad of it went to pay for prior months of borrowing. Thus, what was supposed to fund us thru the summer, about a third of it went backwards. Guess what's about to happen again?

Maybe that is not it. Maybe the markets are celebrating What Rosenberg Is Looking At - Rolling Margin Debt Has Gone Negative | ZeroHedge. I don't know, the last two times this happened was in '00 and '08 (two fantastic years!). Here is the chart Rosie is looking at, not to promising if you ask me courtesy via zerohedge via Gluskin Sheff. . 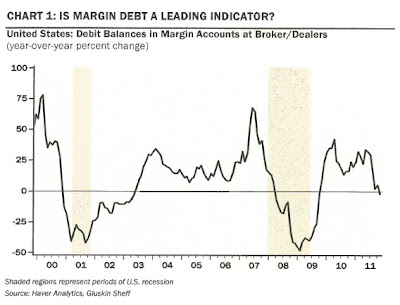 AH HA! I found the answer. Just as expected it involves the rumor promise of a liquidity injection (this time in the EU with the LTRO). As discussed, the markets rise on the promise of more easing or printing of any sort. Also as theorized by STB they are gonna go large (the only problem with this is I thought they would do it as a reactionary measure to a crash which still may happen). How large? $10 TRILLION Liquidity Injection Coming? Credit Suisse Hunkers Down Ahead Of The European Endgame | ZeroHedge. February 29th is gonna be a big day. This will of course the follow the FOMC non event on the 24th and 25th. Then the mext EU summit comes March 9th.

Ahhhh, the cure all, just print baby! For those that don't get intervention and want a refresher on why the markets where they are and what the most likely outcome (crash) will be, I suggest you read You Can't Fool Mother Nature For Long: Financial Markets. This is good stuff, "Where would the stock market be if the Plunge Protection Team (PPT) didn't manipulate the stock market via massive purchases of ES S&P 500 futures contracts? These massive purchases are always executed in sparsely traded pre-markets, maximizing the ramp-up effect, which then triggers momentum chasing buys from high-frequency trading machines."

Speaking of strange, did you know that Ron Paul does not exist to the main stream media? I have shown you the MSM making believe that Ron Paul does not exist in the past and will continue to every time I have the ability to do so. This is simply unbelievable. For those that think the MSM does not try and control your every thought and mold you into zombies, you need to wake up. Here is more proof. Fox News Caught Completely Excluding Ron Paul From Post Debate Coverage Alex Jones' Infowars

Apparently no one has their shit together, so we had to push the war back 6 months. Either that is true OR Obummer knows the war will be in an "occupation" state that we're all too familiar with from Iran and Afghanistan by the election and not a "war". Thus, postponing the war/invasion till closer to the election (no president has ever been defeated in an election during a time of war) will better his chances of reelection. Remember it is all about politics and power, it has nothing to do with anything else. Will everyone please check their crackberry to see if they are available for a war in 6 months?

And he's still the Democrat's best option? He's our second best option (to anyone)? Wait, he's still an option for being president again? "As the House returns Tuesday for the final session of his first term, Obama’s failure to fulfill this central claim of his 2008 campaign has never been more glaringly obvious." Partisan Washington: Obama's broken promise - Carrie Budoff Brown and Jonathan Allen - POLITICO.com

This one is gonna freak you out, "How Does America Compare to China, Iran, Saudi Arabia and Other Repressive Regimes?" An Objective Comparison of the U.S. to Regimes that Everyone Labels Repressive - Washington's Blog. "Top constitutional law expert Jon Turley notes in a must-read Washington Post article called “We are no longer the land of the free”"

I have long speculated that we'll be a cashless society in the not too distant future. This way they will be able to track every purchase and tax every transaction. They will also be able to know everything you buy, when and how much. You should be concerned about this, very concerned. They are finding this out in India right now, "However, current events in India should serve not just as a warning, but also as a foreshadowing of the events to come in the Western world, specifically the United States." Cashless Society: India Implements First Biometric ID Program for all of its 1.2 Billion Residents Alex Jones' Infowars

I would like for you to read my post Is Apple (AAPL) Headed For a 50% Haircut? that I put together this afternoon. It may be quite telling in conjunction with the way the rest of the indexes (and that Rosie chart above) are setting up.