Well, they managed to close the gap on the minis and calm the seas for the moment. There really is not much to say this morning as we simply wait out the Greek bailout solution. The drama continues and with that drama comes a confused market. Placing bets here does little good when the swing on the outcome has the potential to be wildly dramatic. Add to that Portugal waiting in the wings with both hands out, and the rest of the EU is not in any better shape.

Here is the bottom line, when do the bailouts end? At what point do they give up? It is obvious that austerity is not and will not happen. The tables have been turned with Greece now holding the WMD willing to pull the trigger on its self (and Portugal following). That of course will blow up everything.

So, at what point do the arms and paper start flying in the air in frustration? Are they prepared to give up? Do they have a disaster plan in place ready to go? Is it possible for them to have a plan for the failure of the quadrillions in CDS? I think that is where we are now. It has become either a do and do and do and then die or just die situation. At some point the stresses on the system will fail. The bailouts can not go on forever.

I've been patient all month, began to lose my patience last week, but am regaining it again realizing the above situation and the chaos that surrounds the unsolvable situation. I don't know what they are waiting on. One thing that is for sure, the longer they drag out the process, the longer the markets will hang at overbought levels. Hopium is a powerful drug.

Right now either the markets have topped or are in a topping process. Looking at the charts it appears that the next most logical time for the markets to top is in the second week of March around the next EU summit that coincides with some cycles I have. That will give the weekly indicators time to get to where they need to be and for the larger wedge to play out. That is not a call, just a thought. As I said, the markets may have topped. When the markets top this time it may be the last high for decades to come.

SPX Daily - Overbought, now embedding, but rolling over with negative divergences indicating the weakness at these lofty levels. Note the collapse in the dollar and TNX. I'll tell you what I find disturbing, there is no clear upper diagonal resistance for this move. The tops have no structure or pattern that they should have identified by this time in a natural move off the lows. Chop, crash and ramp, chop, crash and ramp is not normal. 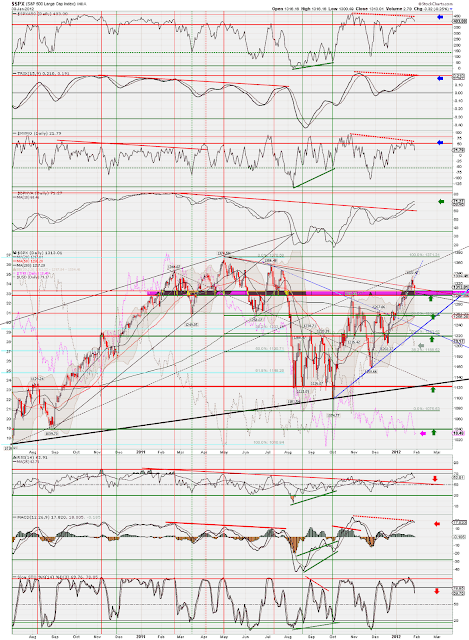 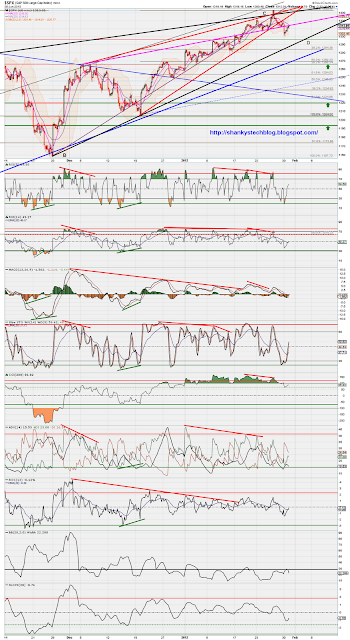 Minis /es 15m - Yellow channel support busted with the gap down yesterday. they have fought their way back into the channel and closed the gap. I preach the form of the fall. The first 30m candle Friday and the gap yesterday were good signs that a turn may be in process. Now the bears need to prove they are ready to keep the ball and start moving it down field. 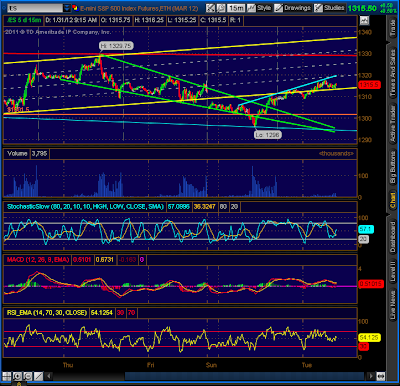 Honestly, right now the state of things is more or less a standstill. Till the EU resolves to bail out or not we're stuck in the mud. Patience will be required.