"FOMC Schedule - You all know that I love and preach following the Fed. This FOMC Meeting chart has been a wonderful tool for STB. I have used it combined with TA to make some pretty fine calls (if I may say) for some time now. At this moment it appears that a move to upper resistance (blue) at the FOMC meeting on Jan 24-25 would be a likely call and something traders should keep an eye on." Shanky's Technical Analysis and Market Commentary: Morning Post 01/04/12, SPX

FOMC Meeting Schedule - Of the 13 instances on this chart where markets have been rising into FOMC meetings going back to June of '11 where price is rising to the meeting only once has it failed.

Here is the same chart today with the only change having added the upper thin blue diagonal (which must admit did not thing was in the equation) and having moved the blue arrow up.

Combining this (well the Fed's intentions since they are the puppet masters) with technical analysis has allowed me to make some pretty strong calls over the past two years.

Minis 60m - This minis chart I have been showing for a couple of months now has been nothing short of spectacular. The rising yellow channel (bullish) now turning into a rising wedge (bearish) have given me the support/resistance points with a staggering degree of accuracy. The green wedge is driving into the upper (red) resistance diagonal off the 1586 over the 1373 tops. This should by all rights be "the" point for a reversal. Of course that is up to the Fed and not the markets. 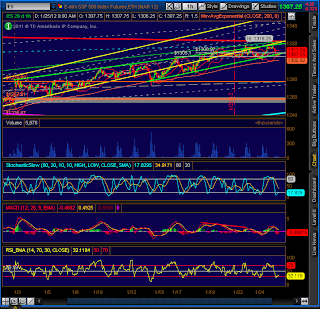 The mass of air supporting the COMPQ will only get worse this morning. Right now off the November 2440 low 44% of the move in price is gap area. That is not sustainable. 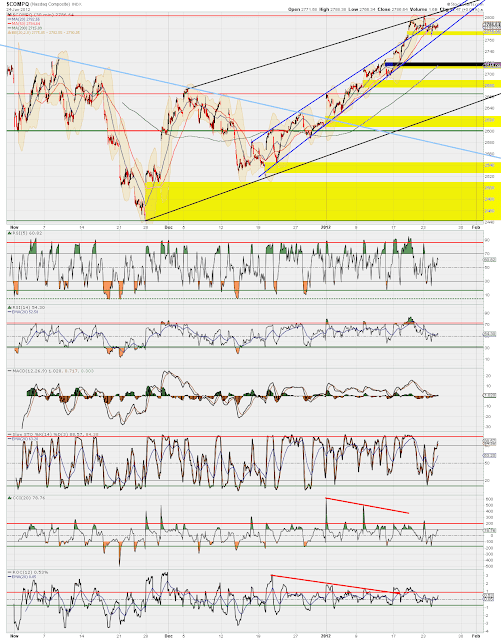 Daily SPX - BB's narrowing while the upper BB is being tested with overbought indicators (see red boxes and red vertical lines) with others (my fav the NYMO) diverging does not look good all while upper resistance is being challenged. 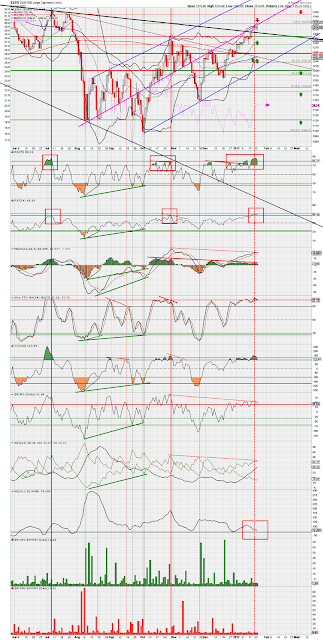 Gold (/yg) daily - Gold is set to possibly collapse which works well with the set up for the markets if this fall is what everyone is expecting it to be. Channel support (green) off the '08 lows is holding price now. What has formed after the blow off top to 1927 is a decreasing triangle that looks rather ominous. For more detail on this see my Is Gold About To Collapse? post from earlier this month. 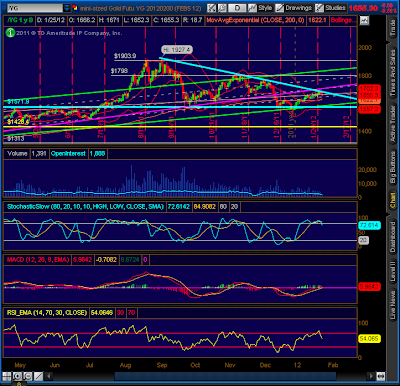 Let's see what the Fed has to say then I'll get into calling things in the commentary as usual. I'm looking for the green wedge support on the minis to give way. IT should happen with flair. This should become impulsive. Remember I'm looking for form. The minis need to close the week at 1276 or below to get a nice weekly reversal candle on the board.

UPDATE - Minis 1m - You know my interest is up when I break back out the VWAP and the Vbands - To say the least - green wedge support is working its miracle again. This is what I am looking to fail for my cue that the turn is in. As always, the backtest must be warned against and expected. Triple resistance (yellow, green and upper blue Vband at 1316. First resistance around 1305 then 2nd near 1309 with VWAP and resistance.

Sub 1305 than 1300 round level is what the bears are looking for. I am suspecting it remains weak but not off the charts weak till the Fed speaks. 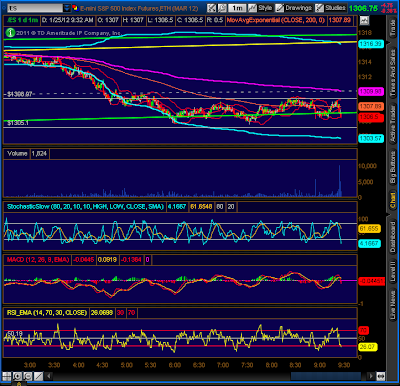