Funny, STB loves confirmation of the wild and crazy theories we present here on almost a weekly basis. For those of you that doubt or think my ranting on the economic data manipulation are unfounded maybe you should read Bureau Of Labor Statistics Caught Red Handed Leaking Confidential Employment Data | ZeroHedge. "But at least the next time the market does its usual pre-NFP acrobats, the only question will be: which particular US politicians i) traded in advance of the embargo lift, and ii) leaked the information to ten of their closest friends, who did the same, who did the same, etc." This one is nice as it covers both data manipulation and the congressional insider trading and many other points we consistently call bullshit on.

Speaking of data manipulation maybe you should read Mish's Global Economic Trend Analysis: Buyer's Remorse; Record Volume of Returns Before Christmas; $217 Billion Returns Expected, Up 14% before the next round of really bad data points are released that you should not believe. Anyone here remember the recent "revision" (you know the 20% markdown) in home sales going back to 2007?

Sticking with the corrupt/crooks/theives theme this morning another must read is Jesse's Café Américain: Trustee to Seize and Liquidate Even the Stored Customer Gold and Silver Bullion From MF Global where you get, "Get your money as far away from Wall Street as is possible.  And if you want to own gold and silver, take delivery and store it in a secure private facility outside the fractional reserve system." The theme of getting as far away from the system as possible with you wealth is starting to take root across the interned and not n fringe sites, but with major players. STB has long been recommending you buy your gold of silver in untraceable amounts with cash and keeping it at home or is some very safe place. See Denninger's thoughts on this topic in Private Property Now Subject To Seizure in [Market-Ticker].

Want to see something that is really fucked up and will absolutely blow your mind? "As the following brief but must watch video explains, the ESM "is an organization that can sue us, but is immune from any forms of prosecution and whose managers enjoy the same immunity; there are no independent reviewers and no existing laws apply; governments can not take action against it? Europe's national budgets in the hands of one single unelected intergovernmental organization? Is that the future of Europe? Is that the new EU? A Europe devoid of sovereign democracies?"" Video Explanation Of How The ESM Is Europe's Uber-TARP On Steroids | ZeroHedge

Most readers know that STB has been targeting 1040 SPX for quite some time now before the next massive stimulus is released. Recently CITI came out with a 950 target  and yesterday this came out Bank Of America: "Santa Is Not Coming", Sees 50% Chance Of Drop To 950 | ZeroHedge.

SPX 60m - It just looks like a likely point for some sort of corrective to stop the bleeding, temporarily. With the 10yr at 1.84, they need to do something fast. 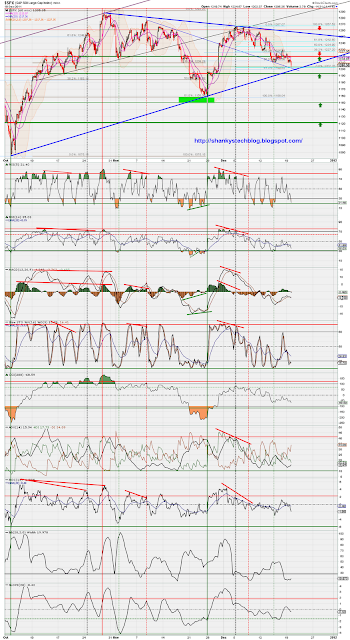 Most readers know that I think a killer biological weapon will come with the next war (put whatever theory you prefer with this post). I was not surprised to find Alarm as Dutch lab creates highly contagious killer flu - Science - News - The Independent yesterday. Just something to keep in mind. Remember they can't afford to feed everyone and the entitlement state is getting a bit out of hand. What better way to remove a large part of the burden that to simply eliminate the problem under the guise of war with a killer flu virus.

In yet another police state development - The Anti-Internet Bill has NOT Been Postponed To 2012 … The Committee Members Who Support SOPA Sneakily Changed the Hearing Date to December 21st, Trying to Trick the American People Into Thinking It Was Over Until After the Holidays So We Won’t Fight Back! - Washington's Blog

Bloomberg TV actually reported that Ron Paul has the lead in Iowa this morning. It was of course a brief bit after a big piece on Romney, but a mention of reality is nice.

Housekeeping: As noted yesterday, with the holidays upon us the AD's are being postponed until after the first of the year unless something big pops up that needs coverage. I'll be here during the day, but with limited coverage for the next couple of weeks. Morning posts will not be interrupted.