I went hard on y'all with the AD Internment post last night and for good reason. The cleptoracy is taking over. I really do not know how else to approach this other than to tell you that his crap has gone from fringe conspiracy to in your face US Senate bills in record time. It can no longer be denied. Blogs used to avoid discussing this stuff for fear of being ridiculed and running readers off. Now, if you don't discuss this I believe you are doing the readers a great disservice.

If you conservative 50%ers that can't get that this stuff is real and can't quite get over the hump need proof beyond the National Defense Authorization Act signed last week and Detention Camp Order Follows Preparations For Civil Unrest I can't help you.

I ask you to read Corzine's testimony to Congress. "It is extremely difficult for me to reconstruct the events that occurred during the chaotic days and the last hours leading up to the bankruptcy filing....I simply do not know where the money is" Presenting Jon Corzine's Complete Testimony To Congress | ZeroHedge.

That's right, the broker dealer just "lost" over a billion dollars of investor assets. Let me put this in plain light, this is like Merrill or any other BD just "losing" your money. No different. This was over 6 weeks ago and they still have not found the money. And thus we call it a cleptocracy. There are no rules. Corzine will plead the 5th and his buddies the Clintons and Rockefellers will give him the protection he needs to walk away without a scratch just like every other bankster has since this debacle began.

They are turning us all into tax beasts of burden as they "try" to solve the crisis as they actually are stealing everything right out from under our noses. From bailouts to foreclosures, the banks are gobbling up everything they can in a mad dash. This unregulated wild west of financial Armageddon is spinning out of control.

As we wait (again) on the EU to deliver some sort of "package" that will save us all, investors can do nothing as the system is now completely rigged to respond to rumors of this or that bailout and ramp up price (which rarely adjusts back when the rumor du jour is proven false) at the open and then again at 3:00 every day. I suspect that tomorrow will come and go, just as every time in the past has, without any sort of resolution to the crisis in the EU. Heck, they have not fixed it by now, we all know they can't fix it and even their finance ministers have said as such. So, why the minutia? Why the bullshit? Well, they have to set up the exit plans and that is where the NDAA and the internment camps come in. They need to prepare for one globally pissed off populace.

More on all of this later -

Let's keep this simple - Back at the 1292 top I wanted a drop, pop and bust. Let the dailys fall and set one last divergence before a really major move south. I thought this would happen in November (sorry - I only got a 12% plunge), but they managed another rumor driven stick save for the Christmas EOY period. It is possible this is the pop part of that scenario and the last climb to 1275 was just a precursor. More time was needed.

Now I'm beginning to wonder what January will have in store. We have a war with Iran that is really happening, MENA is in total turmoil still, Japan is rigging their GDP, we're fudging every economic number relevant or not, the EU is about to bust up, China is falling apart and many other issues exist. How long can they hold this together with all the turmoil, no money and a debt problem so large that it is virtually unsustainable?

The minis 1257 area does not want to breach again. If it does the last two pops above it were brief and unsustainable. If they can get it thru I'd speculate 1275 to 1292 as the max and then you better look out.

Daily SPX - You can clearly see the 1262 resistance does not want to give and the indicators are getting tired. STB still pointing to the weak divergence in the MACD. None of this matters though, cause they will send the markets where they want them to go. STB still speculating they need a massive move south to force the central planners into one last massive stimulus. STB looking for that at 1040 SPX. 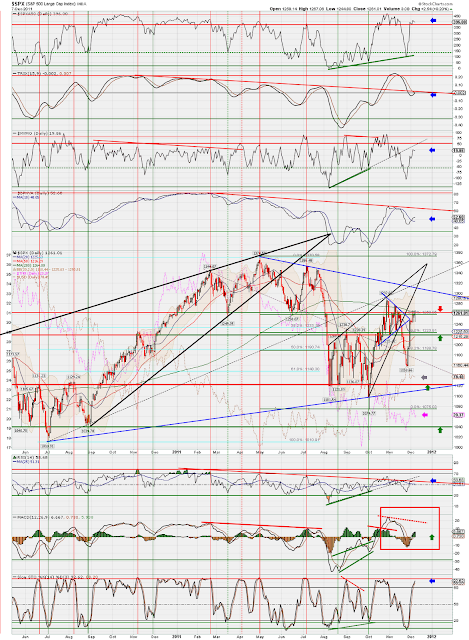 Minis 4hr - this is the chart I showed yesterday with the nasty divergences. Pink wedge support is gone now. I'd suspect a fight at 1236 and once thru there 1200 and old channel (yellow) support to come into play. 1218 should be a sticking point as well on the way down. 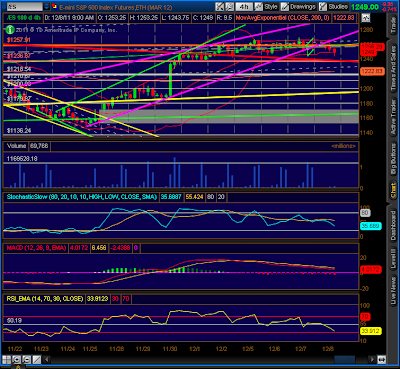 Minis 1m - So much for that employment "pop" this morning. Nice try Bernanke. 1257 holds as you can plainly see. that is the line in the sand and has been for months. 1236 is support. Actually the whole range between 36 and 57 are fill of s/r points now. That is your range to watch. There is one other diagonal at 1236 providing double support. that is the old resistance diagonal off the 1292 theu 1272 tops (red). 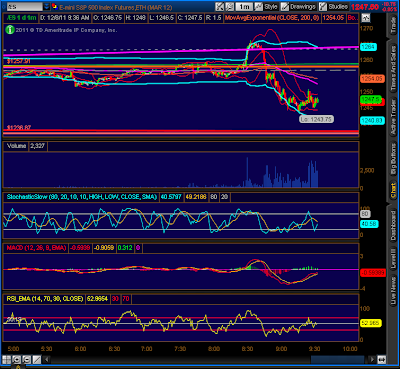