Here's a good sentence to start the day that sums up the central planning bankster takeover quite nicely, "perhaps it is not the actual mechanics of this liquidity bazooka but the perception that democracy itself has been suspended in favor of bank and sovereign survival" from "ECB Liquidity: Back-Door Bazooka Or Suspension Of Democracy, BARCAP Opines | ZeroHedge. In the AD last night and over the past several months my focus has been shifting weight from heavy market coverage to more of a balance between markets and civil liberties. Why, because with the impending global financial meltdown it is just as important to know how you will be effected personally as well as financially.

This sentence sums up the outstanding jobs report yesterday, "What the hell happened there?  It looks like a hell of a lot of people got laid off and shifted into the extended programs as well.  This definitely wasn't in the November numbers for the big report..... so where did these people (nearly 900,000 of them?!) go?" Heh Claims, Once Again in [Market-Ticker]. More data manipulation from government agencies to give the impression things are improving and all is well.

And as mentioned last night in the AD the markets did not react to the RIMM miss nor the Fitch Downgrades 8 Global Banks Including BNP, SocGen, BofA, Deutsche, And Morgan Stanley | ZeroHedge. Quite amazing to have the futures up 10 after those two AH events! With opex today and max pain 124 on the SPY they need some relief I guess.

As STB has been calling, patience for this fall may be required. After today the gates could open as all that is left to support the markets will be the PPT and some EOY positioning. After the 24th all bets are off.

Minis 30m - STB got the backtest of busted 1218 s/r after the hold at the LT support diagonal (yellow) and the 60m divergence with pink falling wedge underthrow. Now price is drifting with 1218 as the ceiling. If that should crack 1236 would be as high as I am willing to give it, but I don't think it gets there (unless we get some sort of major rumor out of the EU which should not come as everyone has taken off for the holidays). 1227 (red diagonal resistance should be it. If not upper green channel resistance should hold. 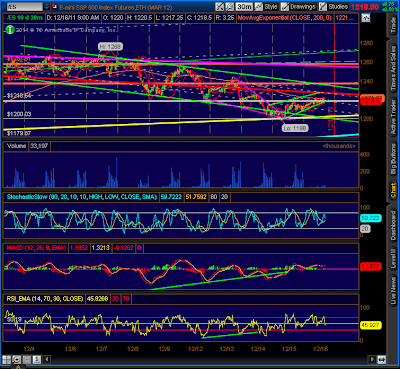 Probably the most telling chart to me is my SPX Bullish Percent chart. The divergences here in the past have not lied. Not the collapse in BPSPX and price is stalling setting a double top. 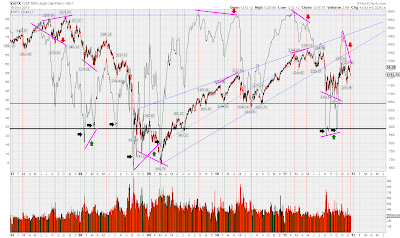 Financials still lagging while indexes are all over the place to say the least. 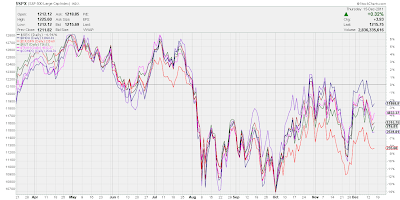 With the advent of the NDAA, the police state is now in place. I spoke to someone  currently stationed at Fort Benning recently who was spot on with STB's thoughts and has confirmed the FEMA camp/prison is there. Yes, it exists. No, he could not confirm that there is a cell there with my name on it already, but he confirmed the existence of the camp. I will be having more discussions with local military (we have probably the highest concentration anywhere in the states). Preliminary summary is that the majority are becoming disenchanted with their missions and they will not fire on US citizens even if ordered to (this is the job of the local police hoodlums). Primarily they have sworn an oath to defend the constitution of the US. I have feelers out to see if this language changes. I suggest you read Ron Paul’s Constitutionalist, Anti-War Stance Supported By U.S. Troops Alex Jones' Infowars. More conversations to follow.