So, like a bunch of whining babies not getting their candy or toys, the markets moan and complain about not getting their easing "fix". I hate to sound like a broken record, but this should be proof enough (and the 2000th iteration of this) that the only thing that keeps the markets afloat is intervention. Reality is the Fed can ease at any time they want. The issues now is what collateral damage comes with every additional dollar printed.

The EU summit came and went (yet again) without any sort of resolution. As we have been discussing there is no resolution or "fix" as they want you to believe. About the only action left is to print, print, print like they never have before. We also all know that this will only lead to increasing the already unmanageable debt load. So, when does the proverbial fiat dollar finally break the camel's back? That is the question we ask every day.

"As Reuters explains, the euro slipped versus the dollar on Wednesday after Italy paid a euro era record yield of 6.47 percent to sell five-year debt, adding to concerns that an EU summit last week had made little progress in tackling the region's debt crisis." Euro Drops Under 1.3000 Following Record High Yield On Italian 5 Year Auction | ZeroHedge

For the longest time it wave a faux pa to discuss or address potential conspiracy or fringe issues in the blogosphere for risk of alienating viewers and risking one's reputation as a reputable blogger. STB in recent months has gone a bit heavy on the police state and other conspiracy topics that I believe are very important. The world is changing faster than we can keep up with. I include these topics because they integrate with the grand picture. The impending market collapse and economic distress are directly related to the rise in police state action. The fraud and corruption ranging from Wall Street to Washington is way out of hand. This is all relevant not only to market actions, but to your freedoms and well being as well.

Just yesterday Zero Hedge, while always on the edge of conspiracy but never quite crossing the lines, posted to important pieces that may mean they are finally crossing the invisible line. I'd really appreciate it if you would read “Big Brother is Eyeing Us – For Good or Evil?”. You should also read the still developing (and should be exponentially expanding) Was The "Collapse" Of MF Global Premeditated? A Conspiracy Theory, _and what some may call an outright conspiracy theory, that by scuttling MF, Corzine effectively helped some shell company (or companies) which were controlled by a "cabal" of his closest confidants (we will let readers come up with their own theories who the former CEO of Goldman Sachs may have been close with) to make the offsetting profit that resulted from the accelerated and massive losses borne by MF's stakeholders in the vicious liquidation."

DOW Daily - As discussed in the AD last night, the pop and drop to set divergences on the daily chart is complete. This does not look healthy. 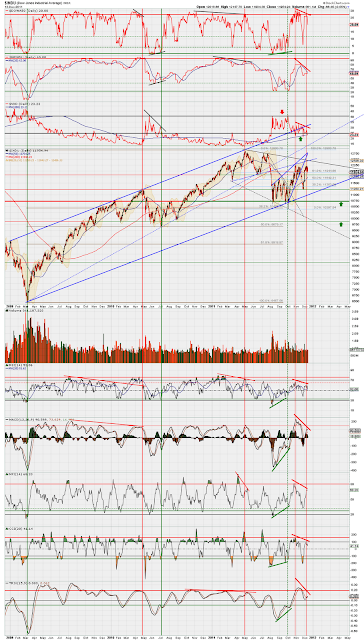