Let's keep this simple this morning. The most recent post from Zero Hedge says it all, "We are there now, in other words, we have just experienced a behind the scenes Bear-type event. What is disturbing is just how fast the rate of change was this time around compared to before, when it took months to get to $50 billion. Now, it was one week. When "Lehman v2.0" hits and it will hit, the next step function in the Fed's global bailout will be so big and so fast, it will induce vertigo." We Just Had A "Rerun" Of Bear Stearns: When Is Lehman Coming? | ZeroHedge

As I have called and with DB's post yesterday, they need an "event" before the massive easing comes. We're close, but we've also been close for years now. Put it another way, every day we inch closer to the inevitable, but no one knows when that will be, we just know it will be. What used to be months between blow ups is now weeks or days. The mounting crisis is almost fully compressed and with each day the vice moves another turn. Sooner than later implosion happens.

If this is true, ECB Confirms Shadow Banking System In Europe In Tatters | ZeroHedge, then you will see some really dirty laundry come out soon and the situation is at critical stage. Where the behind the scenes fixes were manufactured is busted or locked up, then that is essentially taking away a vital organ that allowed money to flow.

And for the icing on the cake, "In other words, as we have been saying, the funding squeeze has now managed to shift away from USDs and is impacting the EUR market itself, something the Fed has no control over." European Banks Dash For Fed Cash As Dollar Swap Usage Soars, Funding Squeeze Now Shifts To Euros | ZeroHedge. And if the Fed has no control over it, then .........

Duck and Cover is in full effect here. STB has been telling you for months it is all about liquidity. When they run out, everyone runs out and everything stops. If you do not have cash (and food) at home by now you better get it soon. This will not be an easy fix and will require an unprecedented shutdown of the global financial system. The only way to clear the slate and open up flow with bee for (as STB has been predicting for years) massive default. That will be to just get the funds flowing again.

STB has been holding out all week and last knowing they would be either delivering rumors or some sort of BS plan by the 9th. That has been the wise move. At this time price is beginning to tell you the market is wary of the end result. Divergences on the 4hr down are screaming sell. We all know that whatever they come up with to save the system will be futile, so it would only delay the inevitable. Sadly that is the game we have to play. If it were not for the EU meeting, I'd be balls deep short here.

So, back to the Shanky call, crash, war and massive stimulus should be the game plan. My November swoon worked but did not get me to 1040. Maybe I should have given more credence to the EOY prints and the Christmas rally. 1040 is coming and it should not take long to get there once the fall gets started. 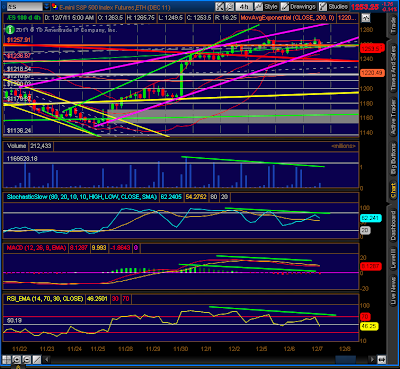 SPX Daily - Tons of resistance at this point and little support below 1220. MACD looks sick. 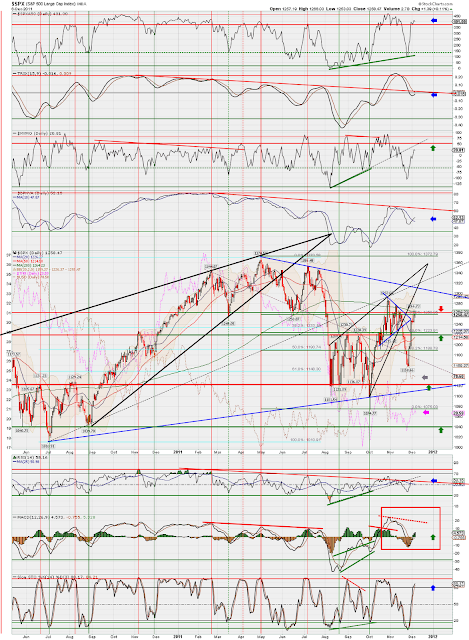 Bullish Percent SPX - Something is not right here for sure. 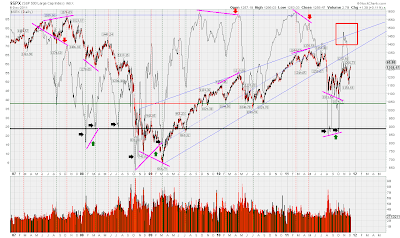 Minis 1m - after the BS pop last night (just another manipulated fake out on rumor driven news) the minis have slid 13 to pink diagonal support at 1252 pushing the lower Vband down. 1257 does not want to let go. If that pink support diagonal goes so does the market. They will most likely have a backtest of this area before anything major. They still have until the 9th to generate market ramping rumors. 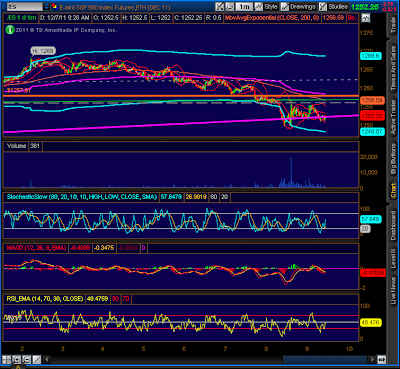