Alright, now why am I harping on all of this doom stuff? Simple, because when the financial meltdown comes, you better be ready. It is not coming you say? Shanky fear mongering you say? Don't think so. I back everything up here. Try this on for size, "“THERE IS NO MEANS OF AVOIDING THE FINAL COLLAPSE OF A BOOM BROUGHT ABOUT BY CREDIT EXPANSION. THE ALTERNATIVE IS ONLY WHETHER THE CRISIS SHOULD COME SOONER AS A RESULT OF A VOLUNTARY ABANDONMENT OF FURTHER CREDIT EXPANSION, OR LATER AS A FINAL OR TOTAL CATASTROPHE OF THE CURRENCY SYSTEM INVOLVED” Ludwig von Mises Egon von Greyerz: There Is No Deus Ex Machina Left | ZeroHedge

I hope so cause, "French President Nicolas Sarkozy has warned that "never has the risk of disintegration been greater" BBC News - France's Sarkozy warns Europe risks disintegration. All this stuff is from the horse's mouth folks. Sadly most of you still don't get it. I get that. This is a very tough emotional hurdle to cross. The financial world is melting down in front of your eyes, and you are like a deer in the headlights. I suggest you blink and get out of the way.

Wait THERE'S MORE! "virtually unlimited leverage via the shadow banking system, in which there are practically no hard assets backing the infinite layers of debt created above, and which when finally unwound, will create a cataclysmic collapse of all financial institutions, where every bank is daisy-chained to each other courtesy of multiple layers of "hypothecation, and re-hypothecation."" Why The UK Trail Of The MF Global Collapse May Have "Apocalyptic" Consequences For The Eurozone, Canadian Banks, Jefferies And Everyone Else | ZeroHedge

On the Corzine non-event dog and pony show, "It is extremely difficult for me to reconstruct the events that occurred during the chaotic days and the last hours leading up to the bankruptcy filing....I simply do not know where the money is, Corzine "Simply Does Not Know Where The Money Is"" - Presenting Jon Corzine's Complete Testimony To Congress | ZeroHedge. that's right, they just lost over a billion in investor funds - Aaaaaand it's gone - Poof.


I suggest that you read this post from RichCash on Corzine. Informed and insightful as always, RichCash8TradeBlog: MF Global CEO Jon Corzine Testimony, Comments and Opportunity.


And back on the manipulation train - "It is one thing for conspiracy websites to indicate that the Fed or the global central bank cartel are doing everything in their power to manipulate the price of gold lower. It is something different when the 'reputable', Deutsche Boerse owned Market News does just that. MNI Reports Coordinated Central Bank Intervention Sends Gold Lower Intraday | ZeroHedge

Think gold is not an important issue right now with sovereign governments? Try this on for size, Tightening the Noose: France Bans Cash Sales of Gold/Silver Bullion over $600. they want to know what you got. Gee, I wonder why?

OK, one last shot at this internment and indefinite detention issue. The markets will be beyond the EU meetings tomorrow, and we should get back into a cycle where discussing market actions should have some meeting till the next meeting where they decide nothing again. This view hits with a bit of humor (although it is not a very funny thing to joke about) from Jon Stewart. Maybe his communication skills are better than mine and you will get a better appreciation of the cold reality to come from him. Jon Stewart on Indefinite Detention of Americans - Washington's Blog

Nah, we're not violating all sorts of statutes flying over Iranian airspace to spy on them. We'd never do anything like that. I'd bet we would want to get that drone back before they sell it to China or the highest bidder. "Iraninan state television displayed what it said was a downed U.S. surveillance drone on Thursday, days after U.S. officials expressed concern that Tehran would be able to glean information about a classified military program. Iran state television displays 'downed U.S. surveillance drone' - Haaretz Daily Newspaper | Israel News. Hint to the military - how bout a "self-destruct" feature?

We already know the world hate us (our banksters at least) for causing the financial crisis, why not go for the gold ring and be pissed at us for the nuclear one as well! Israel stole uranium from U.S., report will show  THE DAILY STAR. This is a good read.

This goes without STB comment. I'm still driving my point home about NDAA recently signed. "According to this report, this unprecedented attack was begun yesterday when the Central Intelligence Agency (CIA) General Counsel Stephen Preston in responding to a question at an American Bar Association national security conference bluntly stated that “American citizens are not immune from being treated like an enemy if they take up arms against the United States."” Total Collapse | askmarion (h/t Uz). Yup, they might be looking forward to some sort of action coming I think.

Well, it looks like George Soros is cornering the market on ......Police forces and .... Guns! Hey, this guy did not make billions being behind the curve. He's always been ahead of it. So, what does that tell you about our current state of affairs? Kind of ties nicely with everything I have been focusing on this week doesn't it?

Dig this, "On Wednesday, George Soros, the billionaire investor, is expected to name Christopher Stone, a well-known expert on criminal justice, the new leader of his unconventional philanthropic empire. Soros Makes a Move to Control Global Police Forces EconomicPolicyJournal.com (h/t RC). "He expanded Vera’s international programs, working with national governments in South Africa, Russia and Chile and developing a reputation as an expert on the professionalization of police forces."

That nice. A billionaire setting up some sort of massive police force? How will they get the guns they need you ask? "Mystery company buying up U.S. gun manufacturers ... Some gun enthusiasts have claimed that the power behind the company is actually George Soros, the hedge-fund billionaire and liberal activist. Soros, these people have warned, is buying U.S. gun companies so he can dismantle the industry, Second Amendment be damned." The Daily Bell - Wall Street Buys Up Guns. So you buy up all the manufacturers to take supply from the people and sell them to your private police force. Brilliant!

SPX 60m - And I have been showing you the divergences on this chart the past three days using the term "screaming turn". Let's see how well TA works in this case with the EU meeting ending tomorrow. 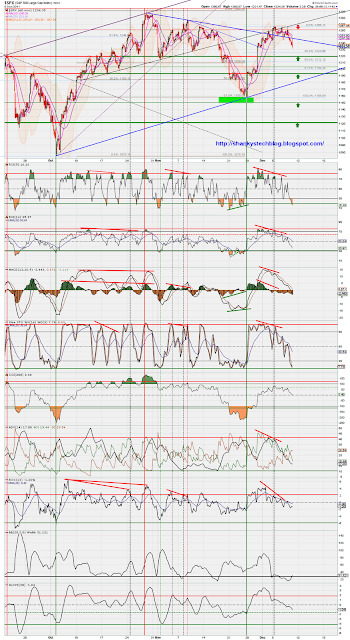