And.... well....We're waiting...... So, bout the follow thru to that near 500 point ramp job yesterday? Well? Horse hockey! Just wait for the jobs number tomorrow, they need a good one. As discussed, none of the numbers relating to any sort of economic or financial data can be viewed without skepticism, Zero Hedge has a humerus bend to that with Predicting Tomorrow's NFP Based On The US 4-Sigma Beat Model of "Truth": +210,000 Jobs | ZeroHedge.

"Don’t get flustered by the terminology of “dollar swap lines” above. Here’s a more simple explanation: Central banks around the globe have acted in desperation to boost liquidity in the system, which has sparked a rally in equities." Central Banks’ Latest Move Shows Desperation | ZeroHedge

Must watch series of videos (related to the ones I had in yesterday's AD)  with Dylan Vrabel and Max Keiser. Discussing the Debunking Money series with Max | Council on Renewal. This interview is right at one year old, but still as relevant as ever. It explains things in a manner that everyone can understand.

Hitting on the foreclosure/lending fraud issues a bit since they tie in nicely to the bankster fraud/rape of the 99% - "“The bigwigs of the corporations knew this, but they figured we’re going to make billions out of it, so who cares? The government is going to bail us out. And the problem loans will be out of here, maybe even overseas.”" A Banker Speaks, With Regret - NYTimes.com

And since you think I may be exaggerating, "The Massachusetts attorney general on Thursday sued some of the nation's biggest banks, accusing them of "unlawful and deceptive conduct in the foreclosure process."" Massachusetts sues big banks over foreclosures - Dec. 1, 2011

So, you gonna vote for Newt? Watch this - "Taken together, claims made in the ad present conservative voters with a question about Newt, and indeed the ad concludes with this query. And that is “What will you tell me next time?”" » Newt Gingrich: Serial Hypocrisy Alex Jones' Infowars

I look forward to this every day. Nothing like hammering this person that has a reasonable chance (if you believe in the polls) of getting reelected. I mean, he's done a jam up job. Who else could increase national debt 30% or close to $4 trillion (in three years!) and have nothing to show for it?

So, just how do you feel about America's future Barry? ""Our kids are going to be fine," Obama told supporters at a campaign event last night. "And I always tell Malia and Sasha, look, you guys, I don't worry about you . . . they’re on a path that is going to be successful, even if the country as a whole is not successful. But that’s not our vision of America.  I don't want an America where my kids are living behind walls and gates, and can’t feel a part of a country that is giving everybody a shot."" Obama: My kids will succeed, even if USA doesn't | Campaign 2012 | Washington Examiner

What a nice guy! National AIDS day and he cuts the budget? "The new global goals build on the work of the President's Emergency Plan for AIDS Relief, which focuses on prevention, treatment and support programs in 15 countries hard-hit by the AIDS epidemic, 12 of them in Africa. Bush launched the $15 billion plan in 2003, and in 2008, Congress tripled the budget to $48 billion over five years." Obama announcing new steps to combat AIDS - Yahoo! News

This is serious stuff. I hope you get it. Here I go again on the smart phone tracking/hacking/listening issue - you really need to read these and be very careful what you say or search on your phone. Please take the time to watch the video in this post, it will blow your mind. Real time data from an Android being logged by a system that YOU CAN NOT TURN OFF!

Think you have all your tracking signals turned off? HA! That does not matter, meet Carrier IQ."Carrier IQ, a diagnostic tool installed in millions of smartphones all over the world, is gathering a lot of info about your activity – possibly even recording keystrokes, content of SMS messages and more – and sending it to a third party. Carrier IQ Tracking Scandal Spirals Out of Control

""These systems that are revealed in these documents show exactly the kind of systems that the Stasi wished they could have built," WikiLeaks details surveillance industry

We're all fucked - "Johnson said only the executive branch, not the courts, is equipped to make military battlefield targeting decisions about who qualifies as an enemy." Obama lawyers: Citizens targeted if at war with US The Associated Press

Rally without the financials? 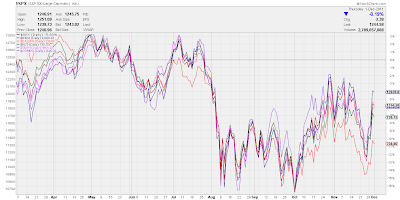 "Christmas is the season you buy this year's gifts with next year's money"
Posted by Shanky at 4:15 PM