I think they are out of bullets at this time and will do what they can thru the PPT to support the markets thru Friday's OPEX and possibly the 24th, but as I have been saying after that all bets are off. The EU summit failed and the Fed is (has been since October) stepping out of the supporting the EU (at least in rhetoric). There is nothing left to support price. Heck all that has supported price recently were unfounded rumors of salvation and hope. Now we just let the liquidity boa squeeze the life out of the ECB and the EU banks.

SPX E-Mini 60m - Back at the early November top I was calling for a drop and pop to set divergences on the daily indicators before a major move south would happen. That is set now. As for right now - See that small pink wedge with the underthrow and cracking the lower Green channel support? Now see the divergences on MACD and RSI.

Either this is a blow off bottom with round level 1200 and LT diagonal (yellow) support or it is about to puke up a lung. With the dollar exploding, the TNX in full submission mode and the daily indicators looking rather ill, full puke may be in order sooner than later. 1218 was a major hurdle for the bears and that yellow line is next. I'm still thinking they try to support it thru OPEX or Christmas, but that may be too much to ask. 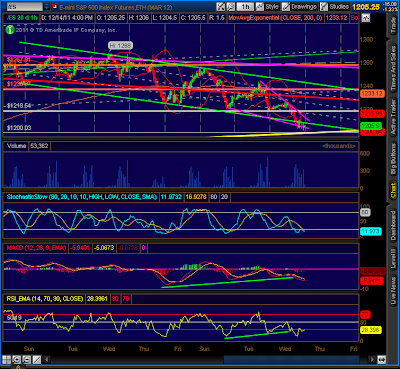 Let's just view a few headlines from this afternoon -

Remember the Monday ramp that came for no reason about two weeks ago and then had a follow thru Wednesday that moved the DOW from 11,300 to over 1200 for no apparent reason (other than for the insiders to make a killing)? Fitch Downgrades Credit Agricole To A+, Outlook Stable | ZeroHedge  "As a reminder, it is our hypothesis that it was none other than Credit Agricole who was bailed out by the coordinated central bank action two weeks ago"

Fitch Downgrades Five European Banks - CNBC  "The firm said the downgrades reflect the "broader phenomenon of stronger headwinds facing the banking industry as a whole. Exposure to troubled euro zone countries through their subsidiaries was a direct consideration in the downgrades of Danske Bank and Credit Agricole.""

I've been saying after Christmas all bets are off. With the next FOMC meeting not until January 24-25 and the next meaningless EU summit until March there is a gap wide enough the bears can drive a D9 thru it right now. Many know I have been on the 1040 big crash train for quite some time and now just may be the bear's chance.

My theory was that in November the real crash would happen (sorry, my bad, I only got 12% fall in SPX - and if you read about the 800 point intervention above you will know the only reason I missed) in time for the Super Committee to justify massive easing. Well it turned out the SC was a total dud and they did nothing. As DB and many others have suggested (after STB I may add) they need to manufacture a crash in order to get the easing necessary to save the system for another year or thru the election in November. I think easing will come as a last ditch effort to save everything. It will be massive, but this will be the final undoing as no one can afford to pay anything back that they already owe.

For those that know I have been on the 1040 SPX train for quite some time now - This fits the bill and confirms a bunch of my theory, Citi Near Term Stock Forecast: 9300 In The DJIA; 985 In The S&P; Sees Chart Analogs To Pre-World War Periods | ZeroHedge

What does more easing get us? Remember I used to end posts with Konichiwa Bitchez? "So how will Japan ever get out of this?  They won't -- they're mortally wounded with a piece of saran wrap over the sucking chest wound that they inflicted on themselves.  As soon as someone tears it off or they move the wrong way and break the seal they're finished." Just Consider This Folks... (Fed) in [Market-Ticker]

I'm pretty sure I have posted this already, but just in case you missed it - "The National Association of Realtors said a benchmarking exercise had revealed that some properties were listed more than once, and in some instances, new home sales were also captured." Realtors: We Overcounted Home Sales for Five Years - US Business News - CNBC. All I can think of is they have something up their sleeve that will allow them to make even more rosier projections in the future with the "realigned" data. There is a scam in there somewhere.

For those of you (suckers) that believe in long term hold scenario and love stocks (I assume not too many readers here) you may want to read the pundits All Together Now: 10 Stocks For 2012 | The Big Picture. IMO, if you short them all out of the gates (this is not a recommendation) you should do better than buying them to hold. Tread with caution here.

Here we go AGAIN and AGAIN and AGAIN - "The Obama administration is alerting employees to the possibility of a partial government shutdown if talks on bills to fund the government and extend the payroll tax cut collapse later this week." Government shutdown preparations begin as funding talks stall - The Federal Eye - The Washington Post. Leadership at its finest! Budget? What budget (for over 900 days)?

You see the failure of the Super Committee (which needed massive intervention to approve a years worth of funding - which we did not get - why not Obummer has already spent more that like all the presidents before him combined or something as absurd as that - which blew my call - which proves we have worthless representation that can't get their heads out of their ass to serve the people - which proves the banks are in control of congress - which proves we're all totally screwed) leaves us on a perpetual month to month funding (which is voted on late at night when no one is looking or reporting the passage of such things). Congrats to STB - I think that is my longest sentence ever.

If you wonder why I have this section it is because you must know how your Constitutional rights are being pillaged and the MSM is reporting little about it. This is real stuff and before too long the US will resemble China or Russia. No, I am not exaggerating one bit. Please read, "“The Senate-passed version of the NDAA, S. 1867, contains Section 1031, which authorizes indefinite military detention of suspected terrorists without protecting U.S. citizens’ right to trial. We are deeply concerned that this provision could undermine the Fourth, Fifth, Sixth, Seventh, and Eighth amendment rights of U.S. citizens who might be subjects of detention or prosecution by the military,” states the letter." 40 Members of Congress Protest ‘Indefinite Detention’ Bill Alex Jones' Infowars

Financials and banks comparison chart - Looks to me like a bunch of falling wedges screaming the need for massive intervention in Jan/Feb after they hit or underthrow the wedge support. I'm not sure they will let BAC get a 2 handle, but it should come close. There may be one last opportunity to buy like hell (for a short period of time after they ease like hell), but after that is over so is everything. I'll really start pushing the panic button after the next easing. 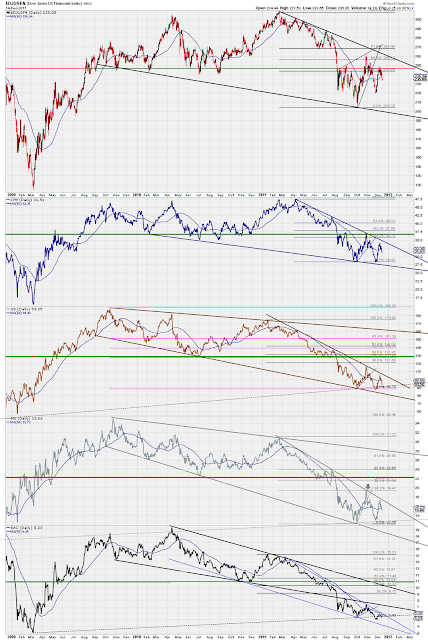