There is no answer. Despite the Fed's Evans constantly crowing for more easing (proving that he's either a total idiot or a market manipulation shill for the banksters), none was delivered today. I'm not sure how or who thought more easing would come today and why any had hopes of such an action. With the DOW near 12000, what's the hurry?

Either way, easing or not, we're pretty doomed. We already exist in a world of insurmountable debt. There are two way to deal with this problem. You either default or make the problem exponentially worse, kick the can, ease some more and make the problem even worse down the road.

We've already done that second solution twice, so why would a third time be the charm and magically fix everything when the first two have ....made the problem even worse? The fact that some believe that all will be well and the charade that the cronies are preaching thru the MSM is really disgusting. For those that still believe that there is a chance things can be fixed, you need to dust up on your remedial math and have your head examined.

I was going to address the liquidity, re-hypothecation and collateral issue tonight, but I ran out of time. Sorry. Also other market news needed to be covered. Will get to that this week. For now all you need to know is that the markets are not happy with the situation. They are holding at a critical point and Christmas may be spoiled if the PPT does not step in and save the day. STB still with an all bets off scenario looking thinking it falls here or right after Christmas. The next FOMC meeting is not until January 24-25.


"A senior Israeli cabinet minister on Monday said Iran must be forced to face an existential question over its nuclear drive: choose between getting an atomic bomb, or survival." Iran must chose between a bomb or survival: Israel

SOPA Is “Unconstitutional”, Would “Criminalize” the Internet … Modeled On China - Washington's Blog

NTSB recommends full ban on use of cell phones while driving - CNN.com

"After observing President Obama for the last three years, it has become obvious to me that the president might prefer to be a university professor rather than do the job he holds today. While he might not realize that he feels this way, the evidence is very clear to those who work with or watch him closely." Dem lawmaker blasts ‘Professor Obama’ as arrogant, alienating - The Hill's Congress Blog


Index Comparison - I have been showing this chart pretty regularly over the past couple of weeks. The financials are not happy and if they are not, then markets usually follow. 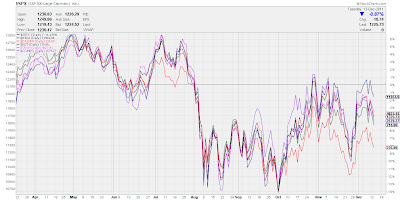 DOW Daily - I have to thank Soup for getting me to look at the DOW chart - and WHAMO there it was - where the SPX has the 1292 top that price has not been able to retrace and it has a "sneaky" divergence I have been showing, the DOW did fully retrace 12250 and set a double top and set a nasty divergence. This should complete my drop and pop to set daily divergence scenario I called at the last top. You are welcome. 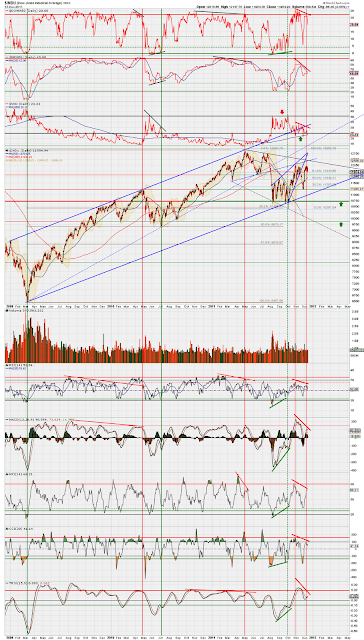 Remember the Reason for the Season!