Not sure where to start today. Friday we had yet another EU D-Day come and go without any form of reconciliation or agreement on how to solve the financial crisis. Of course the markets ramped up to the event in anticipation some sort of solution would come that would end the nightmare.

Well, we all here at STB knew plain as day that nothing would happen and this date would come and go without any "solution" for one simple reason - there is no solution. All the money in the world (currently) would not solve anything. All the money they can print will not solve anything. Piling more debt on unmanageable debt is no answer. They are screwed and it is only a matter of time before something breaks and they complete system fails. They announced March as the time for the next meeting, If, somehow, they can hold out till then, February will be the next ramp month in anticipation of the next "solution". I'm not sure they will make it to that point.

I'm not gonna rehash a bunch of treaty busting rhetoric that produces nothing. I'm tired of the rest of it for now. Nothing "flowed" today, so I don't "flow" now. Not gonna waste your time.

For a nice dose of reality I suggest you read 20 Signs That The Culture Of Government Dependence Has Gotten Completely And Totally Out Of Control. This is some really freaky scary stuff. Good for the spendocrats to know that they have secured their voter base. Bad for the republicons to see this and know their tax base has been destroyed. My favorite: #6 When you total it all up, American households are now receiving more money from the U.S. government than they are paying to the government in taxes.

I disagree with this post only because I think it is a shill piece and that unemployment is really closer to 18%, but you can read it anyway. It has some good stuff in it. Wonkbook: The real unemployment rate is 11 percent - The Washington Post

As posted here this morning - ""Soon we will hold a military manoeuvre on how to close the Strait of Hormuz. If the world wants to make the region insecure, we will make the world insecure."" Iran Military Practicing Straits Of Hormuz Closure | ZeroHedge

OK, so we can't invade or bomb Iran because Russia and China would get pissed off. There is no reason that should stop our "humanitarian" mission of deposing non-globalist friendly dictators in the middle east - Up next? Assad. Are US Troops Deploying on the Jordan-Syrian Border?

You know, some things just boggle the mind. Forget that like the southern half of Arizona is under Mexican Cartel control, or that there are like 50 gazillion illegals here receiving free everything further expanding the spendocrat voter base. Nah, we don't have nay border issues. "Blaming budget cuts, the Obama administration early next year will cut the number of National Guard troops patrolling the U.S.-Mexico border by at least half, according to a congressman who was briefed on the plan." Obama to slash National Guard force on U.S.-Mexico border - Washington Times

Fascinating must read post - Mind blowing stuff - Everything Happening Now Was Planned Before 9/11 and if that is not enticing enough maybe you would like to read Joe Biden Drafted the Core of the Patriot Act in 1995 ... Before the Oklahoma City Bombing. Look, this is all FACT not fiction. You either chose to deal with reality or crawl back under your cozy blanket and pretend none of this is happening. This is no longer fringe conspiracy crap - IT IS REAL. I suggest you at least read about this stuff before you live under Marshall law. At least you will have some sort of clue as to what's happening when it happens (not if).

So, are the days of STB numbered? Are the days of free speech ticking down? We all know (at least those regulars here) that the internet is the only source of reliable, independent, non MSM controlled media where truth is distributed real time. (If the sheeple would only read instead of playing Angry Birds for hours on end think of what we could accomplish?)

Google's Eric Schmidt, "He compared the proposal to the Web censorship practiced by repressive foreign governments like China and doubled down on that comparison when speaking with reporters after his remarks at the Economic Club of Washington." Google chairman says online piracy bill would 'criminalize' the Internet - The Hill's Hillicon Valley. Apparently linking like I just did will become an illegal act.

"It has now become clear that, as we have written and warned about for the past year, the drones that were supposedly commissioned strictly as tools for border control will now patrol inland for suspected criminals on American soil, heralding a new level of police state oppression." Drones Officially Take Flight For Domestic Law Enforcement Alex Jones' Infowars

This is a wild one - you have to wonder or take this to the next level (or three) if you are a regular reader. Can you say "trial run" to set a feeler for what may happen? "State police say the bogus text urging people to “take shelter before 1:24 p.m.” was sent out at 12:26 p.m. Monday to residents in Middlesex, Monmouth, Morris and Ocean counties." Verizon Apologizes For Bogus Emergency Text Message Sent To NJ Residents « CBS New York

SPX 60m - 38% retracement just above major support stopped the fall today for some bizarre reason. Funny how the markets can go up exponentially on rumor and hype that the EU summits would generate a solution, and when they fail the reciprocal does not occur. DOW battling 12,000 is a big deal. 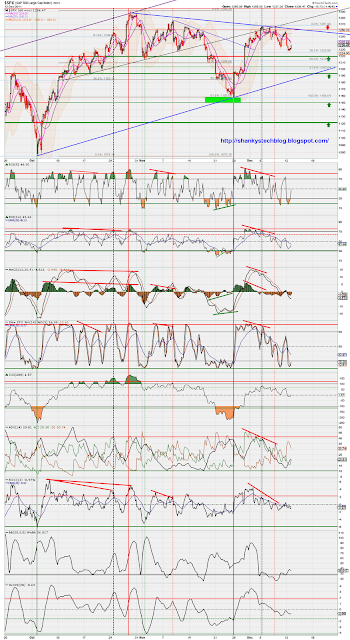