STB loves being ahead of the curve with my predictions on market and political movements. I've got a pretty sporty track record or you would not be here and as you all know I love getting confirmation from the experts or the markets after I go on the record. When this showed up this afternoon, I got a big smile on my face. "As Deutsche Bank suggested earlier, the ECB needs a market plunge to justify an intervention. Hence, here is the ECB's very own Nowotny doing all he can do to precipitate a, you go it, market plunge:" ECB's Nowotny Slams Door Shut | ZeroHedge

There is one problem with the above, they will not let the market plunge. My November swoon call became a 12% move (I'll take it) that they promptly ended last Monday with the coordinated central bank intervention to stave off the next LEH crisis out of France.

In a very similar move to last Monday the markets lifted this morning, but why? The Latest Rumor: Fed To Fund IMF, Bypassing Congressional Refusal Of European Bailout | ZeroHedge. You do realize that you are debt slave right? You have no control over the fed's endless spending of YOUR money that YOU have to pay back to bail out the entire globe which will blow up in their face and leave YOU with the tab. No, that is not speculation. That is real.

AH HA! The reason for the announcement comes after the fact again (yet the markets reacted before the fact again)! Here Comes The S&P Downgrade Barrage - Full Statement, In Which S&P Says France May Get Two Notch Downgrade | ZeroHedge. This bailout/rescue is becoming a weekly event if not more frequent. They can't keep all the balls in the air forever. One will drop soon and when they lose one the rest will come down as well.

This little note is of great importance and fits nicely with another STB prediction/warning that has been floating around for a couple of years. Portugal Is Latest Country To Go "MF Global", Raid Pensions Funds To Delay Fiscal Death | ZeroHedge. That is right, Portugal stole from the country's pension pot to pay its debts to stave off default. I have been telling you that they will come and confiscate steal the pensions, 401k's and IRA's and force them into treasuries. This has been discussed on the Senate floor, but readers still dismiss this as possible. DON'T!

Wait, what's this? Social security is busted? "No.  There never was a ":lockbox" after Greenspan's recommended changes enacted by Ronny Raygun. Instead the Federal Government tapped into the so-called "trust funds" and literally robbed them to set in motion a pyramid scheme -- an orgy of spending money the government did not have, promising to pay with nebulous expectations of revenues yet to come "some day."" I Told You Social Security Was A SCAM in [Market-Ticker]. You see they are going to take EVERYTHING retirement related and create the ultimate welfare state (monitored by the rising police state). Welcome to the new Russia!

Well, let's bolster Social Security then? Wait a minute, we have a slight problem - "Some Democratic lawmakers say that, while President Barack Obama’s plan to cut payroll taxes may strengthen the U.S. economy, it may have some unintended fallout: weakening Social Security." Tax Cuts Seen Undermining Social Security - Bloomberg. Weakening an underfunded social security? Yes, this makes as much sense as you think it does. Confused? You should be.

How bad is it in Detroit? Well, STB has already been bringing to you the fact that 20% of the city is under gang rule and many other horror stories. As long as they keep it out of the news all is well. Well, this made the news, Detroit Poised for Hostile Takeover by State of Michigan; What Needs to Be Done to Fix Detroit Mish's Global Economic Trend Analysis. Yup, you read that right.

You have to admit, from this post and chart, this guy is kicking ass at building the democratic voter base (those deprived and with their hands out living off government tit - the entitled crowd living the American dram). I'll be damned, this joker can create and expand something and do a better job at it than anyone in history -  Over 46 Million Americans On Foodstamps For The First Time Ever | ZeroHedge. That is one impressive chart. Ya think he has this one printed and hung in his office? I'm glad the "recession" ended in 2009 aren't you? 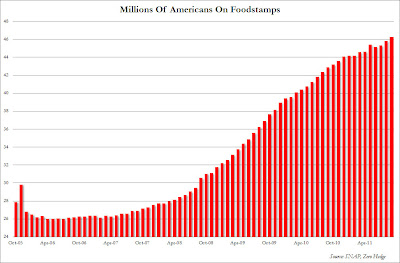 And if you missed this video a couple of years ago, it is VERY worthy of a look/reminder of just how respected Obummer is - Wow, that's our man! Most powerful man in the world right there whom around 50% of the dipshits in this country would reelect.

I guess this is the best we can ask for - Barack Obama Is Taking A 17 Day Vacation Even As America Falls Apart All Around Him. You know he's got some vaca time at the beginning of next year, maybe we can get him to use that on top of this?

"The first grader’s mother, Tasha Lynch, says she was shocked by the school’s decision." 7-Year-Old Accused Of Possible Sexual Harassment For Kicking Boy In Groin « CBS Boston. Want to bet an Obummer supporter is running that school?

World War III - (this section got a new title today)

"Iranian media reported on Sunday that their country's military had shot down a U.S. reconnaissance drone in eastern Iran, but a U.S. official said there was no indication the aircraft had been shot down." U.S. official says no sign Iran shot down drone | Reuters. Lost, shot down, crashed, fell out of the sky, who cares. Bottom line is things are happening and it is only a matter of time till someone really messes up then it will be game on. I suspect we have at least till the end of Obummer's vaca. Can't have that interrupted.

On Predicting the Future -

STB has had the below Monthly SPX chart in the chartbook for at least a year now. It is my best guess at how things will play out. Today when Jeremy Grantham of GMO (one of the most respected and vaunted investors of our time) released this chart I sprung at the opportunity of comparison.

Please note that either way, his or mine, you name it the Fed and many others have already told you with debt/GDP numbers where they are (and will continue to get worse) the next 10 years can be written off for growth. This is a fact.

Jeremy Grantham Releases The Scariest Market Forecast Yet | ZeroHedge  For the record, Exhibit 1 shows what the S&P 500 might look like from today if it followed the average flight path of the 10 burst bubbles described above. Not very pretty." 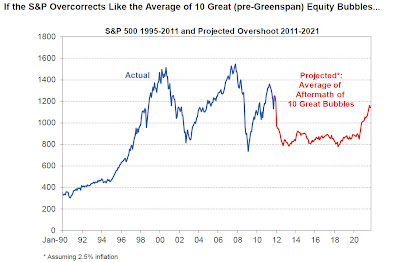 Now let's compare that to the chart of the day with what I think this breakdown may look like. Monthly SPX - Mainly note the lower red and black diagonals that I believe will be in play. Also note the speed of the fall. I think either 2012 and 2013 will be historically bad. At this time (early in the game without time specified, it looks like 560 SPX should be the low. there is a long term terndline running just above 300 that I am considering as well. Remember, this is a best case scenario and there is a possibility that no market exists after this great fall. Crazy? Well if there is no dollar or Euro, why would it be so wild to consider no market or at least one in its current form?