After you read this you decide if we're in the midst of a major depression or not.

Also let me apologize for the length of these, it is just that everything I put in these posts is vital to know. You sure do not hear any of this on the lamestream media. Believe it or not, I usually trim these AD's down.

This morning I went off briefly on the failing global Ponzi scheme that will bring down the global financial system. This was posted to Zero hedge this afternoon, Guest Post: A Very Subtle Form Of Theft | ZeroHedge

"Governments around the world are in similar situations right now with their own public sector Ponzi schemes. Faced with failed auctions, declining demand, and rising yields, politicians are having to resort to desperate measures.

Like any good scam artist, they’re appealing to the masses first; all over Europe, governments are sponsoring new marketing campaigns suggesting that it’s people’s patriotic duty to buy government debt.

In Spain, they’re actually issuing instruments called ‘Bonos Patrioticos,’ or ‘patriotic bonds’. Ad campaigns say that the bonds are “good for you, good for the future.”"

It gets worse, you should read it. Earlier I discussed the coming confiscation of our 401k, IRA and pension system. Remember when it happens it will be "good for the country". Now, if Obummer is still president, this will be guaranteed. If Newt gets the nod, guaranteed. If Ron Paul, it will never happen.

If you don't think the Fed is bleeding you and your grandchildren (born or not) dry, watch this. Remember there is only one candidate that wants to end the Fed (systematically of course), Ron Paul.

Governments out of control? Come on Shanky, get real. OK, hows this for real, the first of the two large events this afternoon was Eurozone To Avoid Any Popular Vote In Treaty Change | ZeroHedge. What's happening is the banks are in control and run the fascist governments these days. You see, we no longer have any control over spending of our own tax dollars (future or present - what's left of them). " The Telegraph's Bruno Waterfield reports, "EU to avoid any votes - parliamentary or popular on treaty change - via obscure Lisbon Treaty 'passerelle' clause, Art. 126 (14) via protocol 12. "This decision does not require ratification at national level. This procedure could therefore lead to rapid and significant changes,""

Well, the EU has its back against the wall. After missing the OCTOBER 23rd deadline to "resolve" their problems, we're now winding down to the latest (and probably not last) 12/09 deadline. We all know they do not have an answer (outside of massive printing that would simply devastate currencies everywhere and only make the end game far worse) or they would have "solved" the problem by now.

So this afternoon the rumor mill was cranked up again. ""In other words, Europe has now given up on nuances and has resorted to nuclear rumormongering: it is commingling all failed funds, adding the IMF, and promises to add Marsian capital as soon as said capital is discovered. That the EFSF was unable to raise €3 billion (and only did so with underwriters retaining half of the issued bonds) on its way to €1 trillion (let alone €2) remains irrelevant." FT Releases Mother Of All Rumors | ZeroHedge. They have no answers and the clock is ticking.

"Intelligence sources are reporting the movement of long-range missile batteries inside Iran, a move seen as preparation for an attack, according to a story carried by the Telegraph on Monday." » Iran Reportedly Prepares for Attack Alex Jones' Infowars: There's a war on for your mind!

In another lie from the master of misdirection, "Even if Obama’s threatened veto was for more noble purposes, the fact is that it would not change anything, because the U.S. government claimed the power to indefinitely detain and assassinate American citizens years ago." The Real Reason for Obama's Threat to Veto the Indefinite Detention Bill (Hint: It's Not to Protect Liberty) Click on that and read it please.

So, when Corzine finally testifies we all know he'll just plead the 5th. Will he get away with it all and not see a cell from the inside out? Well, let's just talk a look at how well he's connected. This paragraph should give you a clue, "The foundation is another member of the Clinton’s extended family. It gave Clinton its Lifetime Innovation Achievement Award July 27 and the foundation is listed as a between $1 to $5 million contributor to the William J. Clinton Foundation, along with several members of the Rockefeller family who are listed as individual contributors." Claim: Clinton Collected $50K Per Month From MF Global - HUMAN EVENTS

They just keep gobbling up the info on us as fast as possible. Library of Congress to receive entire Twitter archive - FederalNewsRadio.com ""We have an agreement with Twitter where they have a bunch of servers with their historic archive of tweets, everything that was sent out and declared to be public," said Bill Lefurgy, the digital initiatives program manager at the library's national digital information infrastructure and preservation program. "The archives don't contain tweets that users have protected, but everything else — billions and billions of tweets — are there.""

You are being surviled everywhere you go and every move you make. Stallman: Facebook IS Mass Surveillance — RT (h/t RC)

This is a must watch. Do not discount a word this man is saying. This one will freak you out, but it IS happening.

SPX 60m - And I thought this chart was screaming sell this morning. It got worse today. STB still in wait and see mode with 12/09 EU results too close to challenge (as the rumor this afternoon indicated). 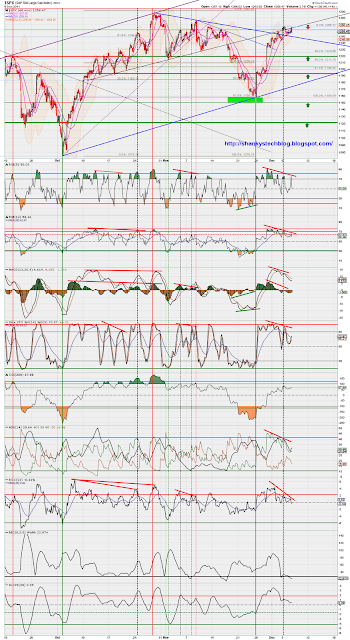 "Sally: Please note the size and color of each item, and send as many as possible. If it seems too complicated, make it easy on yourself: just send money. How about tens and twenties? "
Posted by Shanky at 5:03 PM