OK, so my (our) fears mentioned last night about financial warfare or terrorism were relieved somewhat when China said they would not hold the world hostage (for now). The markets promptly rallied. Those dealing in fundamental analysis and the markets have been further removed from relevance as news dominates the swings. The market is out of control like the BP oil spill. You see the parallel that can be drawn between the two disasters - Greed and corruption kept the problems from being solved when they should have both been addressed directly. They both wanted a chance to milk the system and see if a further path to profitability could be salvaged. It is my opinion that the government allowed BP time to find a solution to recover the oil instead of forcing then to plug the pipes immediately thus allowing the damage to grow exponentially. Can you now see the trend? Big business trumps you, me the government. Profits and taxes are more important than anything.

Economic Calendar - GDP and Jobless Claims this a.m. and Natgas at 10:30.

Here is the update on the possible inverted H&S on the minis. Price is now at the same resistance at the 89 to 91 level that shut us down yesterday GDP and Jobs may spoil the party. 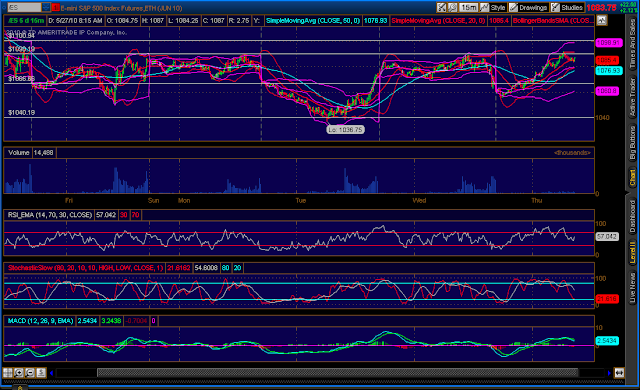 SPX - I'm still holding out one last hope that the 1020 to 1100 area will get hit. The minis hit 1092 and promptly got smacked back 10 points with a little help from jobs and GDP numbers. It is beginning to look like the bottom of this move is being set and that bear market upper TL is going to hold. Here is a chart I was tinkering with yesterday. The pink drop happened and now there are the two up scenarios. The chance of a backtest of the BD line (red dashed) is probable to top out this move. The RSI on the daily chart crossing the resistance lines will be my key to get long and out of shorts. GL! 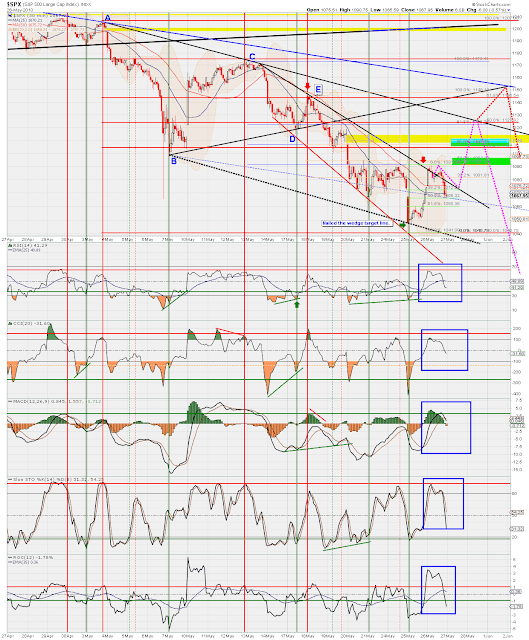