Jobs number was good. Don't worry, at this rate we'll have full employment by 2044 (If we have a census monthly for the next three decades). That is great news Sure affording millions of unemployed living free in foreclosed homes will not be a problem as the Fed will continue to print money till they run out of ink or paper. Of course those on social security and medicare have nothing to worry about either. Phew, glad that this mess is all over. I was worried there for a minute.

The bottom line is THERE IS THAT MUCH SELLING PRESSURE WAITING IN THE WINGS. We are all waiting to get out at the top. I would not be surprised to see this happen again very soon. The market is busted and closures galore are coming. NO ONE is going to remain long after the '08 fall. Everyone is going to get out. Everyone that has a brain (about 25% of the US public and .001% of elected officials) will be exiting.


Minis- up over 5 then reversed on something happening with the Yen.Minis still below the P2 bull corrective's support line sitting on the lower daily BB. Indicators could be worse. MACD is saying this is not thru yet. 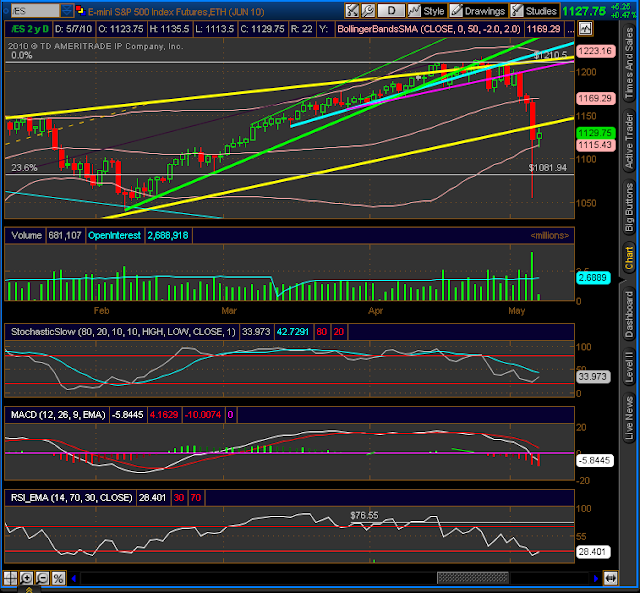 SPX - Not sure which chart to show. My thoughts.... uh .... uh .... uh ... ... I really have no clue. I would expect some sort of corrective here, but then again this same shit could happen again today. Until they kill the HFT bots we're all in danger of that happening again. Look, those of us that live in the real world know the shit is gonna hit the fan. Just do the math, no one can afford any of this shit and the debt bubble will implode globally. How many of you that rode stocks down are gonna stay in this time? LOL, everyone will want out at some time, everyone. I am considering calling a reversal in the length of the ewt waves. I think we need to consider the reversal with 1 being the longest. I think there is a distinct possibility of there being the most damage on the front end of this plunge and that it will not have a normal distribution.

At this time it is even more of a gamble than before. Trades are still being settled and the market has not recovered. CNBS reporting possibly $50 billion in trades that have to be reviewed. Busted trades everywhere. This mess is not over. I suggest you remain on the sidelines till Monday or Tuesday.

As for the POSSIBLE position of the market, it is due for a correction, but is it really? If there is a wave count, I would caution that we could still be in 3 or this could be the beginning of 4. It will take some time for the market to normalize and establish trend if the trend is not being set (ouch). Take the day off.The market is busted and not a safe place to play.

GL and enjoy your weekend.
Posted by Shanky at 9:08 AM