Fresh off taking the little Shanky's to their first WWE match last night I'm fired up. Got to see Cena and The Big Show throw down (literally) of some punks I have never herd of. Well worth the price of admission. What I would like to see is this fake as wrestling rally get an "attitude adjustment" Cena style off of the top ropes. Maybe an old style Goldberg spear to the mid section. Anyway, I know it deserves a smack down and hopefully reality will set in sooner than later. The way I see it is this market should be about to get it's back smashed against the canvas if the Fed does not tag out and get a fresh wrastler into the ring.

Minis up 5.5 to 1188 with the 30m overbought, 60m nearing a possible top and the dailys are decisively negative. Possible sloppy H&S pattern showing up going back a few weeks. It is sloppy, but when combined with the potential EWT counts that are out there it would mesh nicely with a potential 3rd wave breakdown that would thrust the minis down to the 40's. Do the math on a 1.68 3rd wave of 1 and the math works there as well. On the other hand, as this potential H&S pattern has been forming the futures have remained range bound with some great volatility. 1210 to 1180 has been the range with the bull corrective's top resistance line as the upper barrier. Now that the minis have dusted the March and February support lines, there is very little support left. For a permabear like me this is a good set up, but there have been many like this before that have failed miserably. I have to advise caution playing it either way at this time because no clear momo has been established for either side and as long as the carry trade is alive and well, the BD's control trading and the MSM keeps the sheeple in the dark, you can't count out anything. Always use stops and always have a plan for every trade.

SPX 60m - Possible channel down coming. The last wedge breakdown I called (see the E and the last fall in early February) was an easy one we got way ahead of time. This wedge is clear but not as pretty. The volatility is reminiscent of the action at the top of the last wedge (and actually more extreme). You all know I hate the 60m chart to trade by because it's pension to embed. If these indicators (especially RSI continue to follow the divergence lines down then the trend has most likely changed for good I believe as the dailys are driving down and the weeklys will be pulled down with them. Can we finally get a down MONTH? 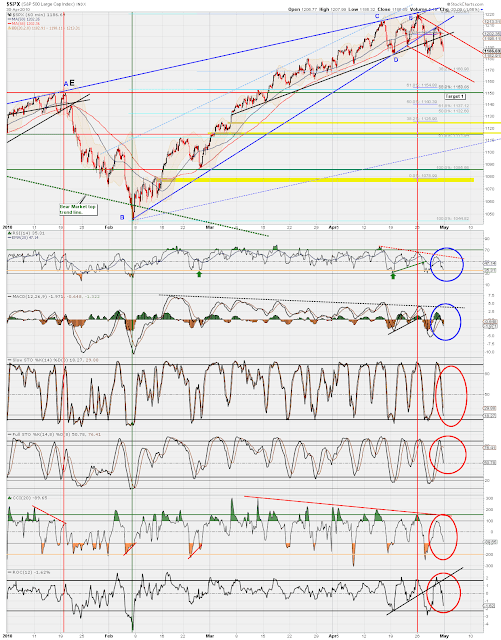 SPX 30m - Could be bottoming and about to give a buy signal. Tough call this an as the gap up will throw this into a buy, but with the minis kinda toppy that gap up may be it for the upside early today. I'll post this chart when I am comfortable that it has signaled a long play. Remember any play regarding this chart can last a period as short as several hours to several days. 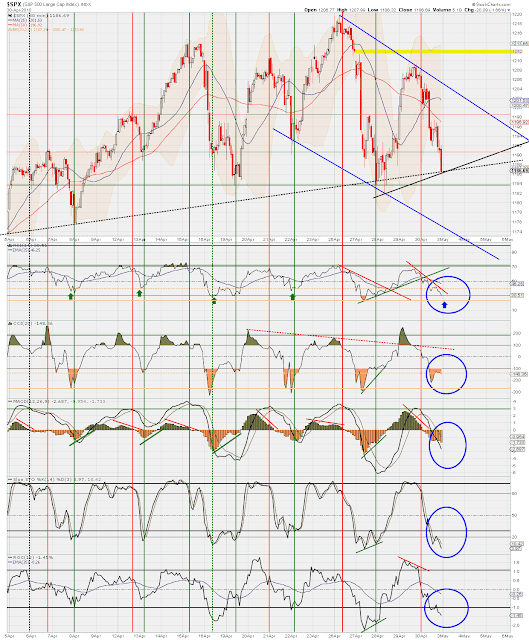 First I'm looking for the minis to retrace to 84 with a potential low near 77. then we'll have to see as the day unfolds. At this time I am expecting an impulsive move south. Something that gets everyone's attention around the globe. If that does not occur sooner than later the bulls are still very much in the game. The bulls will struggle to get the market significantly higher for various reasons. Keep your hats on, it should get interesting  (or at least remain volatile) for some time to come.