Minis Close The Gap - And A Few Charts

Minis down 8 at this time and have been lower. 1106 to close the gap to be precise.

UPDATE: Now only down 5. Rinse/Repeat. They are not gonna pull this crap three nights in a row are they? I tell ya, they are taking cash out the back door in the dead of night while they think no one is watching.

UPDATE 2:  ZH reports Wednesday Trading Session Set To Be "The Most Volatile In Living Memory" Warns Telegraph, Plunge In Bunds Expected  Some are speculating that the dreaded impulsive third wave is coming. It is not a matter of IF but WHEN Carry Bloodbath Resumes With Full Blown Liquidations Imminent Will tomorrow be it? I'm  still not sure and need to get into the charts. It is very possible especially given the ultra extreme bullish sentiment exhibited on CNBS this afternoon.

UPDATE 3 - I'm having fun and throwing stuff in left and right throughout the post. Shall we throw in Calpers In Dire Straits Following Huge Investment Losses, Asks For $600 Million In Funding From Bankrupt California for good measure?

Denninger has The German Government Has Had Enough Is this my EXTERNAL EVENT that is OUT OF THEIR CONTROL that I have been calling for that is going to rip the markets from the manipulators?

Jesse's Cafe -Merkel to The Banks and Hedge Funds: Sprechen Sie Deutsche? Then Droppen Sie Dead a You gotta love the Germans. they were the only ones that called the global bluff and saw thru the BS on the Greek bailout.

UPDATE 4 - Added SPX support chart at the bottom just for fun. Once you get past 667, there is a dark 200 point hole. Not getting ahead of myself here. Just wondering of the possibilities.

Charted some stuff in TOS. Hard to see, but you'll get the picture.

Gold chart - Some like Grantham are calling for a pullback. I myself have called for one for some time. I was disappointed that the last time it fell it did not get more. So far my forecast for gold is about the only thing I have missed in the past year. Yeah, gold did pull back to the 1040 range, and maybe that should count, but I'm with some of the others still looking for 950. The floor may be set where Russia, China and India stepped in and bought large chunks of the heavy yellow material near 1015, but I still think that can be breached. I don;t think anything will survive the next sell off. As a disclaimer, I don't think anyone knows what gold will do. Could it go to 5,000? Sure. Will it go below 950? Nope. I do believe it eventually goes a lot higher. Whether that happens from here or not is the question. Up tons off of the lows and with a nice rising wedge completing. Yellow dashed is the wedge target line. Green is lower TL support. Both interact nicely with fib targets near what I want. Divergences are set already. Volume is declining. 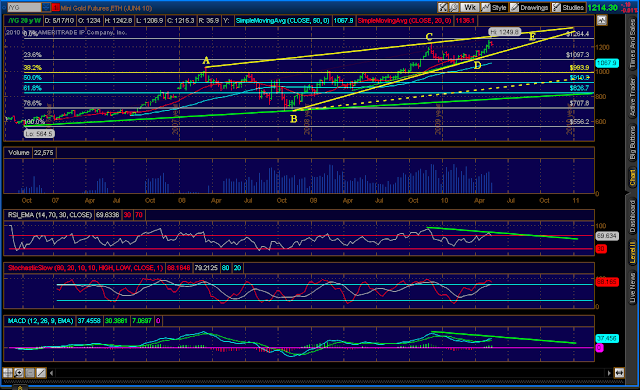 EUR/USD - Not sure if it is channeling down or not, but it is falling. Green TL support can be seen. Support lines are drawn at 18 and 08. With some speaking of parity with the dollar (and I only have a dollar target of 89), something has got to give. The intersection of the lower red support, green support and the 61.8 fin near 110 in early october is an intriguing point. That is of course the EUR is still a meaningful currency at that time.Based on this post from ZH I'm way to conservative I think in my 110 target -Summary Of Today's Festivities From Goldman and Morgan Stanley: Run From The Euro 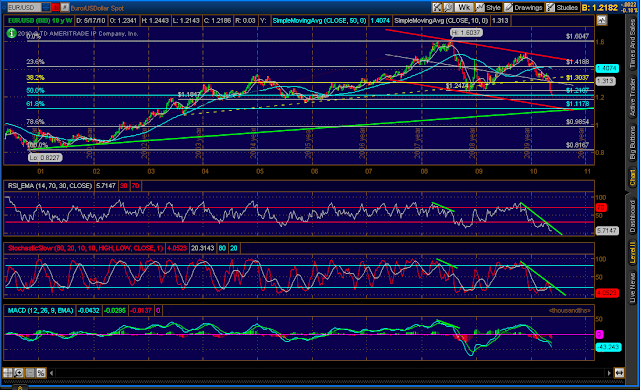 $DJUSFN - Looks like the charts are telling the financials that is all they are gonna get for now, so go home and quit raping the American middle class. The resistance line at $289 goes all the way back to 1997 and is for real. The 38% corrective retracement to resistance is real. It looks like the falling wedge I have labeled is real as well. See you at the bottom TL in a year or two. I'd suspect it has a throwunder of the lower support line before any rally (if the financials are capable of a rally after this fall). 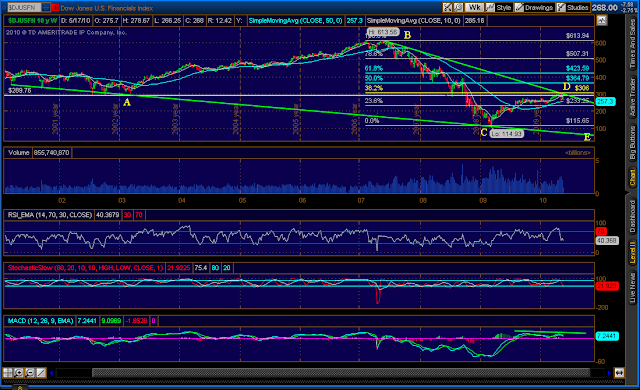 Oil - My ultimate target of $55 or worse is still in tact. Natgas might have some more NT upside, but it should eventually get abused as well. Both are or have formed the same falling wedge that is what is defining the various market structures of the impending collapse.

SPX Support chart - There are more in there, but these are the main points I see. 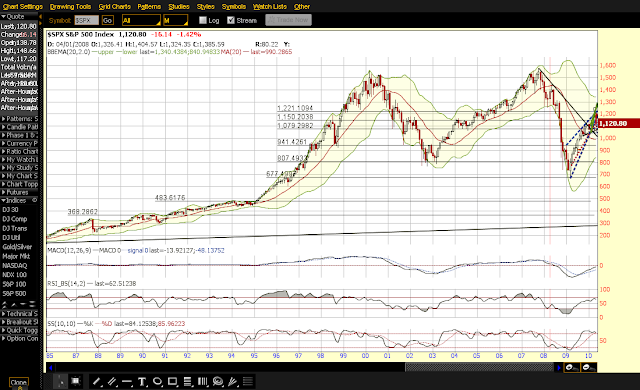 That is enough for now. GL and watch out for falling banks.
Posted by Shanky at 11:40 PM