Happy Halloween everyone. Ghouls and Goblins come out tonight. Will they be enough to scare the bulls away? Tomorrow starts the Christmas season. STB will be in the mood as usual as the season is short and the greatest time of year to celebrate many things. While I leave it off the blog except in the closing of each post, faith in God (or a revival there of - your god, my God or whatever you believe in) may be the one thing we all need to ask for this Christmas, because 2012 is going to be one tough year with many lean ones to follow.

STB has been postulating a November soon for some time. We may have to give it a week to get past the FOMC, EOM flows, a slew of EU meetings and the G20 before HOPE finally fades and the "sell the news" event that the EU bailout should be comes to fruition. All the critical dates are in HERE. What has been really quiet is the Super Congress and the debt ceiling issue.

What has been kept so quiet? "the next major catalyst in the macro spectacle will come not from across the Atlantic, but from these here United States, in the form of the Super Duper Committee tasked with finding the $1.2 trillion in deficit cuts needed in order to make the August debt ceiling hike legitimate. As a reminder the debt back then was $14.4 trillion - tomorrow it will officially surpass $15 trillion for the first time ever, meaning that even as the Super Committee squabbles, half the benefit from its "successful" conclusion has already been implemented." Presenting The Capeless Crusader: The Deficit (Non) Super Committee | ZeroHedge

The bailout of Greece and the EFSF is faltering as most on STB knew it would. You can't fix a debt problem with more debt (on top of even more debt already thrown on the problem). Italy is a bout to bust as well. How many hair cuts can bondholders take (well, investors - not the INF or ECB of course - they don't gt haircuts)? You need to read European Implosion Resumes With Italy Firmly In The Vigilantes' Sights | ZeroHedge. Oh, don't forget the man on the white horse that was coming to save the day, China, has decided to hang up his spurs.

This is worth a look, "The buzz this morning, coming from multiple sources (all of whom so far insist on being unnamed) is that the Greek "restructuring" is going to be declared a credit event and trigger the CDS." "Here It Comes" (Europe) in [Market-Ticker]

Check these headlines from Drudge on the EU bailout - Just reading the headlines  is spooky.

Crisis 'could lead to social unrest'...

Europe Could 'One Day' Issue Bonds in Yuan...

Another good read is from Bill Gross, "And that, dear readers, is the bottom line: put otherwise, we have experienced 30 years of deviation from the mean courtesy of the biggest, and most artificial in history, cheap debt-inspired period of global "growth." And we are due for the mother of all mean reversions when the central planners finally realize their methods to defeat this simplest of mathematical concepts, have failed." Bill Gross' Latest Monthly Thoughts: "Pennies From Heaven" Or Can You Solve Debt With More Debt? | ZeroHedge.

Japan intervention is raging again. If this is not the epitome of desperation, I do not know what is. Japan intervenes to tame soaring yen ahead of G20 | Reuters and Mish's Global Economic Trend Analysis: Massive Intervention in Yen; Japan Finance Minister Promises to "Intervene Until I'm Satisfied"; Race to Debase Back On; Will It Work?

SPX 60m - STB apologizes (unnecessarily) for the lack of creative and insightful charts. October's rumor driven record ramp in the face of total annihilation of the global financial system has left the charts in shambles. We're playing at a casino with rigged dice and need to remain cautious on positions on either side at this point. STB has been referring to "the candle" for a couple of weeks now. TA is struggling to give us a clear direction, but if this wedge and overthrow are any indication a near term top should be set. 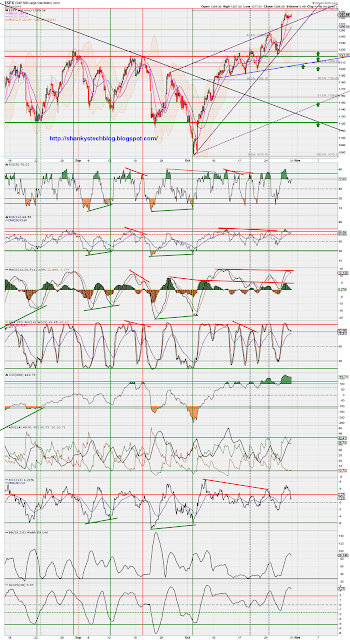 SPX Daily - STB has been speculation that this first move south will not be the move. It can be and should be watched as such, but STB is speculating that the dailys will want a telling divergence in the indicators before the next major (and scary) move south comes. A move to 1220 support and then a pop back to 1257 or current highs should be in order I speculate.

Many are paying attention to the weekly charts and comparing the '07 top to here. Good idea, but don't fall in love with it. There was fraud and corruption in '07, but it was nothing like there is today. 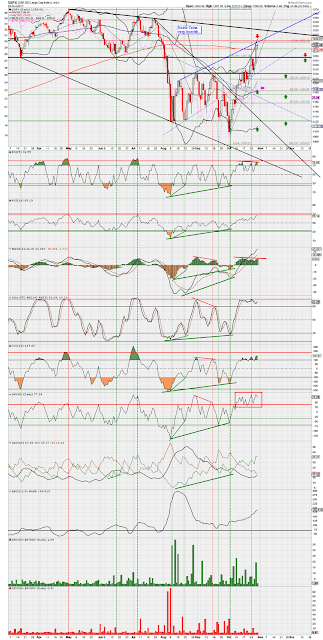 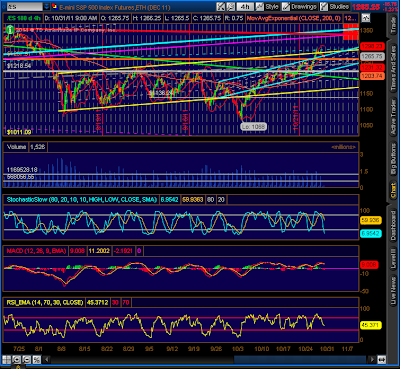 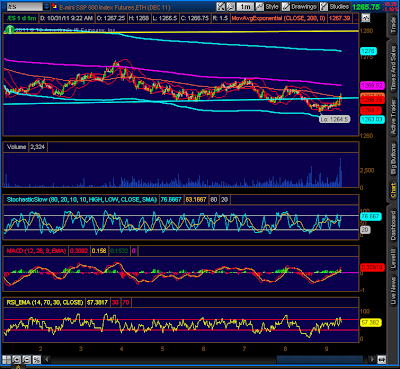