I'm just gonna lay it out for you like I do every day. EVERY SINGLE DAY you get reports here where I try very hard to prove to you not only the US but the world is in dire straights and has crossed the line moving into financial oblivion. The math proves it. The economic destruction is the daily proof. I'm gonna pull a Denninger and give you a wad of I told you so's below.

STB has been preaching about the municipal crisis to come for years now. Well, those years are finally adding up. State and muni budget cuts that are a direct result of the borrow to spend days are finally catching up to the system. You see folks, growth was not real. It was borrowed. The future was mortgaged to fuel the present day splurge. Somehow no one saw it coming. Well, it's here. You see the munis can't support themselves, the states can't support the munis and the feds are no longer supporting the states. Got it?

"Stockton, California, which declared a fiscal emergency in May, warned it may default on redevelopment agency debt issued in 2006, citing a shortfall in tax-increment revenue. Debt service will exceed available revenue by about $858,000 in the North Stockton project area, according to an Oct. 12 filing with the SEC." Stockton, CA Next Muni Default Domino To File | ZeroHedge

Along with the muni issues STB has been since the beginning preaching that the markets are being kept alive for several reasons. One KEY reason, the "illusion" the massively underfunded pension system is alive and well. We all know that Social Security is a farce and most reading this will never get a penny they put in. Those funds in the "trust" are long gone - well there is an IOU from the treasury, but they have a slight cash flow problem now. You know that when SS was enacted there were 33 workers for each retiree - now there are less than 3. What happens when the market fails and the pension system with the only (supposed) retirement savings are left goes down?

"But long before you get to the point where all of the tax revenues are going to pensions (which would be about 40 years hence) you will have either a state bankruptcy or a revolt.  There are of course functions that the State is obligated and expected to provide that go well beyond retiree pensions.  When this fixed cost runs into the remaining funds the state is done." Here It Comes: Pensions in [Market-Ticker]

Since July I have been warning about the next debt ceiling vote in November. Well it is 10/24. Time for that problem to come out of the closet. STB had speculated the markets would crash and force the DC vote to be accommodating and easy enough to pass a massive amount. This in turn would free up the Fed to go after QE3.

"The United States is in for another credit downgrade by year’s end if Congress fails to agree on a long-term plan to tame the nation’s $14.8 trillion debt, Merrill Lynch warned." Merrill Lynch Warns of Another U.S. Debt Downgrade - ABC News

So you are tired of hearing be bitch and moan about the fraud and corruption that exists in the system are you? Well get used to it. It exists. It is real. This is not fantasy. Yes, financial institutions (Citi in this case) built and sold massive amounts of fraudulent MBS that they knew would fail. They sold them to you and then profited on the demise of these instruments because they were short the paper. They not only screwed you on the front end but the back end as well. And no, no one has gone to jail for this.

"The instrument performed exactly as Citigroup intended but they did not tell the people who were buying this thing that they expected they would lose every penny they put in up front.  In fact they intentionally concealed their role in selecting the assets and that they had taken a short position against them!" An Example Of What Should Lead To Handcuffs in [Market-Ticker]

Here is another issue that I harp on regularly - earnings fraud - OK, follow me here, this is really easy and another form of fraud Wall St. lays down to juice price performance. Step one, QE is flowing and supporting everything under the sun - nothing can go down. Step 2, miss earnings in a QE perpetually levitated market - price does not fall no matter how big a miss you have. Step 3, lower next quarters estimates without damaging the stock price in the meantime setting a very low hurdle. INTC was my favorite example of this. They are all in bed together.

CAT's Earnings In Context - Expectations Lowered By Over 10% In Last 3 Months | ZeroHedge (CAT Weekly Chart - it is massively oversold and at LT support - it is there for a reason of course.)

The Fed and administration (and those in power in the EU) closely resemble Monty Python's Black Knight. they think each round of new debt (like losing an arm or a leg) is no big deal. Something tells me they will wind up like the Black Knight with no arms or legs still standing firm that they are invincible when the battle has long been lost.

"the income gap between the country's rich and poor has been reduced by nearly half." News from The Associated Press  - OK, first guess what country this is - take a moment - think - hint - what country does STB say it will resemble before this is all over? Argentina! This is the end result there - a massive entitlement state. How else do you quell the masses. Of course that works for a country the size of Georgia, but it happened there as an end result of financial Armageddon.

"to those that do not think some form of world government or central power is coming" - and they call the currency the Bankor (Yes, this is real. It is Lord Keynes model currency.), "The Vatican called on Monday for the establishment of a “global public authority” and a “central world bank” to rule over financial institutions that have become outdated and often ineffective in dealing fairly with crises." Vatican calls for global authority on economy, raps “idolatry of the market” | Reuters

OK, so three dictators down, who's nest? Last week STB reported on the foul and disgusting language ("You could be next.") out of Washington warning other leaders around the globe. The UN and Washington are out of control at this point. the next "humanitarian mission" will be in Syria.

""Now that military operations in Libya are ending, there will be renewed focus on what practical military operations might be considered to protect civilian lives in Syria," McCain told a World Economic Forum meeting in Jordan." McCain raises prospect of military option in Syria

And of course, GAME ON! "Syria immediately followed suit by recalling its envoy to Washington for consultations, signaling a further deterioration of relations between Syria's rulers and Washington, which has called for Assad to step down and deepened sanctions on Damascus to include the country's small but key oil sector." U.S. withdraws envoy to Syria, southern strike spreads | Reuters

WTF is this move. I'm a bit perplexed by this. This is the type of crap that starts happening when things get really desperate. Hell, we already ship our now and future tax dollars to the EU anyway, so what would the difference be if they put us back under the rule of the crown? I'll tell you this, we kicked their butts out of here once, I'd suggest they back off.

The event, presented by the Temple American Inn of Court in conjunction with Gray's Inn, London, pitted British barristers against American lawyers to determine whether or not the American colonists had legal grounds to declare secession. BBC News - Is the US Declaration of Independence illegal?

And in our daily beat down of Obummer -

Run away! Run away! STB loves to waller in all the bad news and displeasure surrounding the soon to be worst president in history. Of course with every dictator disposed his rating spike massively (why the hell do you think Syria is next on the hit list?). "But already, as Obama’s most recent forays into battleground states indicate, there are growing signs that many Democratic politicians don’t want to get too close to him, either." Democrats duck President Obama - David Catanese and Alex Isenstadt - POLITICO.com

It would be fair to say the 30m goose is fully cooked (actually overdone and should be dry as that turkey in Christmas Vacation). I'll have an extensive chart update done for the post in the morning. 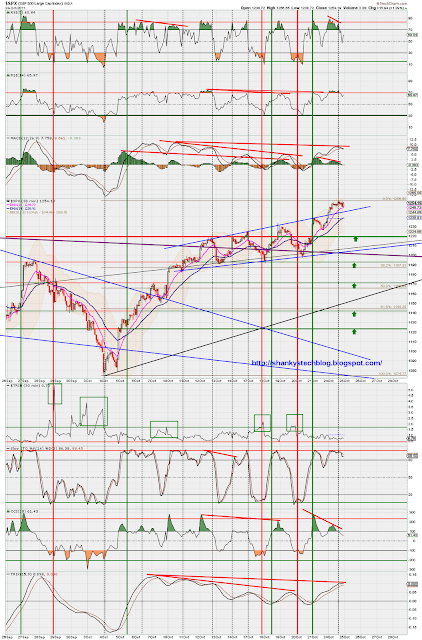 Daily SPX- Backtesting the neckline,resistance at 1257 at 61% retracement of the move from 1370. 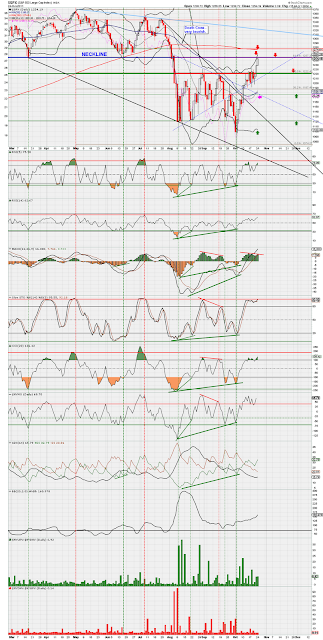