"David Cameron has urged European leaders to take a “big bazooka” approach to resolving the eurozone crisis, warning they have just a matter of weeks to avert economic disaster." ‘Time short’ for eurozone, says Cameron - FT.com

All is not well but that obviously means nothing in the investment world. Betting on the rumor of the eventual fix that everyone knows will fail seems to be the thing to do. One may wonder why cash is running for safety at the same time the investment universe is running to get in early on the next big run? In The Meantime Belgium Bond Yields Jump, ECB "Flight To Safety" Facility Usage Soars To Highest In 15 Months | ZeroHedge. Wonders never cease.

You see, "Some time ago we suggested that in lieu of actual practicable solutions (and a promise to recapitalize several trillion worth of insolvent banks absent some magic money printing tree or gold coin defecating unicorn, is so stupid only the market ramping vacuum tube algos can believe, if only for a few hours), the only thing left for Europe's leaders is to baffle absolutely everyone with relentless bullshit." European Mission Accomplished: Everyone Is Now Thoroughly Baffled With Bullshit | ZeroHedge

At least someone appears to be getting off the EU good ship lollypop, "The former premier caused surprise in Tory circles by saying yesterday that now is the time to insist on ‘looser’ ties with the EU." John Major: We can use eurozone debt crisis to grab powers back from Brussels | Mail Online

All the above only focuses on the euro zone. It did not even scratch the surface on domestic issues and the problems with China, Japan, MENA and everywhere else you look. Yes, dear readers, it has come to that. Those at STB have known this for years now. Those just catching on, welcome to the game and reality. The financial crisis is a crisis and the fracturing around the globe is beginning to pick up steam. Won't be long now till someone actually says something they will regret and let yet another cat out of the bag.

SPX Weeky Target - As I have been pointing out there are two scenarios, do and then die or just die.

5m SPX - Count the divergences to the double top on Friday. It should have been a glorious spot to take a shot at least a corrective. That, until last night of course. No worries mate. Bernank and crew have everything under control. 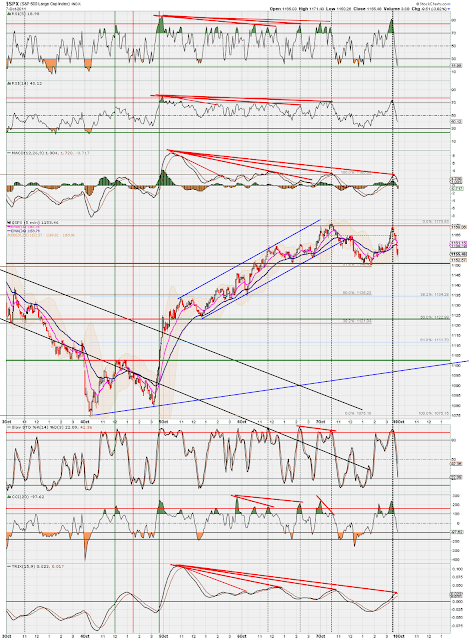 Bullish Percent Comp to SPX - Those pink divergences in the past have been pretty accurate. This fits with the positive divergences on the daily charts that have been trying to set for a few weeks now. Looks like they are gonna possibly fool the sheeple again. 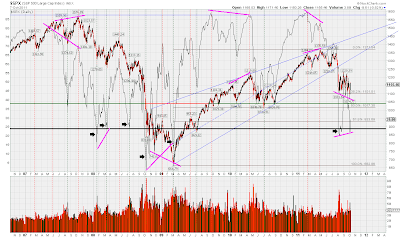 Let's see what sort of rumor driven short squeeze they can engineer this time. That "big bazooka" Cameron referred to should be expected by the bears eventually. Earnings start this week. STB is still in the 1040 camp and the Fed or someone will come to save the day one last time. Team Manipulation is not out of the woods just yet.

Don't forget Anon is going after the NYSE today.


Will be headed home sometime today making tomorrow business as usual. I'll be in and out till we leave here today.