I guess everyone is still a little hung over from the 400 point ramp party the DOW threw late yesterday. There was some follow thru today, but not much to crow about. If that move had been real and had any sustenance the markets would have been up almost as much today. I guess rumor driven ramps are good for just that, nothing other than artificially lifting price to a level that allows the powers that be a bit more breathing room and more importantly time.

From the "Lord I hope they pull this off" category - Anonymous threaten to take down NYSE.com. "The message went out through a video on YouTube calling for a "DDoS attack" attack on the New York Stock Exchange's site at 3:30 p.m. ET on October 10. That's Columbus Day, a holiday for many U.S. workers, but the stock markets will be open for their usual trading house." Mark your calendars!

With all the China/US rhetoric flying around is it any surprise this happens over Hawaii? Missile defense system hits 2 targets over Hawaii - Yahoo! News.  "The test took place at the Pacific Missile Range Facility in Kauai (kuh-WEYE'). The agency says that during the test, the system engaged and simultaneously intercepted two short-range ballistic missiles. "

Jobs? What Jobs? Announced Job Cuts Rise 212% From Year Ago - Bloomberg  "Announced firings jumped 212 percent, the largest increase since January 2009, to 115,730 last month from 37,151 in September 2010, according to Chicago-based Challenger, Gray & Christmas Inc. Cuts in government employment, led by the Army’s five-year troop reduction plan, and at Bank of America accounted for almost 70 percent of the announcements."

It's not only the banks that will be charging you more - Americans Face Double-Digit Hikes in Electricity Bills to Fund Upgrades - The Daily Beast  "From Alaska to Georgia and Wyoming to Florida, utilities are seeking permission to pass on hundreds of millions of dollars in new charges to customers to help upgrade aging infrastructure and build new or retrofitted power plants that comply with tougher environmental regulations, a Daily Beast review of regulatory filings has found." This is just the medicine for struggling homeowners.

You haters will enjoy this one. I'm still not sure how he's even in line to be reelected - Opposition to Obama grows — strongly - The Washington Post  "While the topline numbers are troubling enough, dig deeper into them and the news gets no better for Obama." Read on, not pretty and all deserved.

To make matters worse - Congressman: Obama admin may be accessory to murder with ‘Fast and Furious’ | The Daily Caller  "Republican Rep. Paul Gosar of Arizona told The Daily Caller on Wednesday that Obama administration officials responsible for Operation Fast and Furious might be accessories to murder." Well, what are you waiting for. Ahhh, let them get a bit deeper into the election season and then throw the trap. Think it will work? I have no idea. Would not surprise me to see a man with a birth certificate issue and blood on his hands running the show here. That would bout be par for the course for where this nation is right now.

Are the sheeple finally waking up? - Election 2012: Generic Presidential Ballot - Rasmussen Reports™  "A generic Republican now holds a six-point advantage over President Obama in a hypothetical 2012 match-up for the week ending Sunday, October 2." Hell you should be able to put Stan, Kyle, Cartman or Kenny up against him and it would be a no brainer.

Daily SPX - That is a double divergence. Bears should be concerned at least near term. I have been pointing to the first divergence for over a week now. To be clear, I am still in the 1040 camp, but a bear market bottom could be set and a sizable corrective could be on the way. I know, it goes totally against all rational thinking. All those red arrows are resistance points. 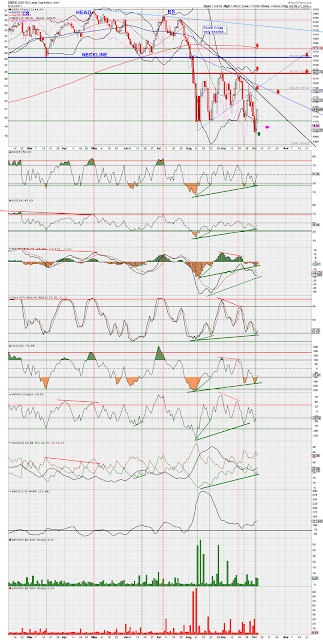