Another rumor - another stick save. This is no longer amazing - it is annoying. It is annoying because of the gravity defying price action in the face of impending financial doom, the ability to generate a market ramping "rumor" (not fact - rumor)  whenever it is needed on a moment's notice is becoming so commonplace that they are now beyond humorous.

When the comments section of a blog like this can predict with an astounding degree of accuracy that "they" need a "bump" and it comes - you know something is f'd up. (Sorry to the board there - not discounting your brilliance - just trying to make a point that a gaggle of ex-financial, farmers, managers, lawyers, business owners, retirees, programmers and various other occupations - none related to or with Wall St. experience - can seemingly kick the experts collective ass at their own game.)

So, this afternoon we get another bump from Van Rompuy And Barroso Announce €440 Billion EFSF Fully Functional; Now, How Do They Expand It To €3 Trillion? | ZeroHedge. "The only problem, yesterday, today and tomorrow, is the open answer to the question of who will pay for this €2.5-3 trillion rescue net? Because we now know that China, which is busy bailing out its own banking system is out of the picture, while the US has its own major problems - the last thing the Fed needs is for the general populace to realize the Fed is once again directly bailing out failing European banks, like it did with Dexia." This post is required reading for everyone. Please click and read.

OK, so that gave us all such a warm and fuzzy feeling about the safety of the banks in the euro zone, after hours today we got Fitch Downgrades UBS, Many Others, Puts Morgan Stanley, Bank of America, Goldman, BNP, Deutsche Bank, SocGen And Others On Watch Negative | ZeroHedge.

And since JPM trounced earnings this morning - wait - what - they were a what - lie/false/bullshit? Don't tell CNBS that. "And now you see why American banks can never lose - in a good quarter, they release reserves; in a bad quarter they take FVO benefits in the form of Debit Valuation Adjustments, or in this case both! Winner, winner, always a chicken dinner for Jamie Dimon. Expect every other bank to do the same accounting BS this quarter to pad their numbers." JPMorgan Uses Surge In Its Default Risk As A $1.9 Billion "Source" Of Revenue And Net Income | ZeroHedge

The banks need some help, so where do they turn? the continuing operation "raid the middle class" - This was a lovely read - "That increase signals banks are moving more aggressively now against borrowers who have fallen behind on their mortgage payments than they have since industrywide foreclosure processing problems emerged last fall. Those problems resulted in a sharp drop in foreclosure activity this year." Sharp rise in foreclosures as banks move in - Business - Real estate - msnbc.com

OK, let's move to another desperate government group - the post office - when you are in deep shit you do anything for cash - even sell your (that would be everyone's) personal data for profit! "“In this case, you have a federal agency collecting information for one purpose, forwarding mail, and using it for a wholly different purpose, direct marketing.”" Postal Service's 'welcome kit' raises privacy concerns - Washington Times


THIS IS A MUST READ!

Congratulations people in Louisiana, you are screwed. As STB has proposed, we are moving to a cashless society. Why? So they can track EVERY purchase and maximize tax income. No transactions will be hidden from Big brother in I'm guessing 5 years.

Speaking of being screwed -

As I (and many others) have been speculation, our floundering leader needs a war and fast to give him a bump in his approval ratings in order to get him reelected. I am absolutely horrified that this is actually a possibility. Read on -

"I am frankly shocked that Eric Holder should have brought us this steaming crock, which is now being used to make policy at the highest levels. That a Mexican former drug runner being paid by the US taxpayers might have thought he could advance his career by playing mind games with a somewhat crazy Iranian expatriate is no surprise. That you could put fantastic schemes in Arbabsiar’s mind if you worked at it seems obvious. That anyone in the DOJ or the US foreign policy establishment would take all this seriously is not plausible. I conclude that they are being dishonest, and that this is Obama’s turn to wag the dog as he faces defeat at Romney’s well-manicured hands next year this time. Wagging the Dog with Iran's Maxwell Smart | Informed Comment

"Retired U.S. Army Lieutenant Colonel Anthony Shaffer says that an FBI insider told him the dubious terror plot to assassinate a Saudi ambassador which has been blamed on Iran was likely manufactured by the Obama administration, because no information about the plot even exists within FBI channels." » FBI Insider: Obama Administration Likely Manufactured Dubious Terror Plot Alex Jones' Infowars: There's a war on for your mind!

""The Iranian leaders, furious over the Saudi intervention in Bahrain and what they call crimes against the Shiites of that country, have openly created centers to recruit volunteers for suicide bombings against Saudi Arabia’s interests worldwide. Several grand ayatollahs in Iran have issued a fatwa for Muslims to come to the aid of their Shiite brothers in Bahrain, who they claim are suffering horrific crimes from their government in collaboration with the Saudi armed forces." Iranian Clerics Call For Attacks And Suicide Bombings On Global Saudi Interests | ZeroHedge

GOOG - If GOOG after beating estimates is up $40, that puts it just under resistance and nearing a double top scenario with a nasty MACD divergence. We'll know more in the morning. 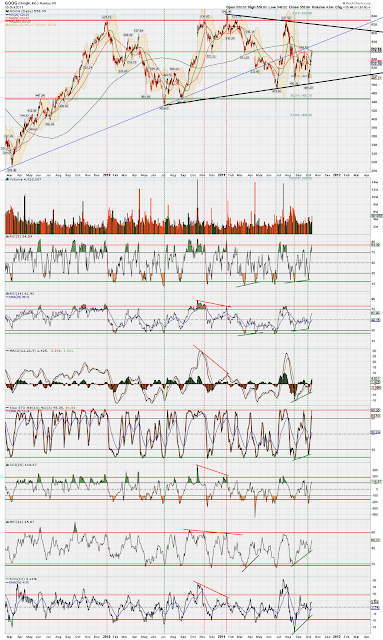 Index Comparison - Apparently the COMPQ has a mind of its own (which will be exacerbated in the morning after GOOG's beat). Who cares whats happening with the financials? 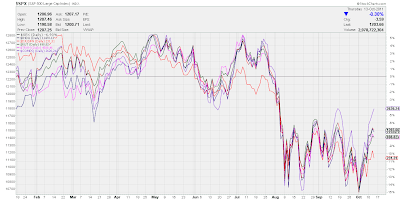 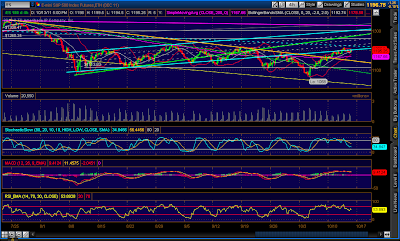