And the markets are moving up because? Well, we all know the reason (or reasons). Rigged, rumor, HFT. POMO, you name it, all combined make a nasty brew to induce short squeeze mania. The bears should be petrified right now. It appears their respect for team ramp is in place. They have all witnessed the last two QE ramps. (Don't forget that the EU just upped their QE quota last night by $75b.) Just keep on reading the news and following the Fed/rumor train. It will all end terribly and every dollar they throw on the fire only makes the end game that much worse.

The good news is that Le Figaro Discloses France Has Prepared An Emergency "Just In Case" Nationalization Plan For "2 Or 3" Banks | ZeroHedge. "There are three phrases the market never wants to hear. Ever. They are "contingency", "just in case", and "only." Alas, it just got all three of them in an article just released by French Le Figaro which, per Bloomberg, has disclosed that "France has been working for a number of days on a plan that would allow the state to take a stake in the country’s financial institutions if needed." Of course Sarkozy Advisor Says French Bank Recapitalization "May Be Necessary" | ZeroHedge which is quite comforting as well. The DOW has rallied over 700 points in the last three days with this as a backdrop? Seriously?

Add to that THIS! BBC Does It Again: "In The Absence Of A Credible Plan We Will Have A Global Financial Meltdown In Two To Three Weeks" - IMF Advisor | ZeroHedge


It no longer matters if we have had Jobless Claims Over 400K, 26th Week In A Row Over 395,000 | ZeroHedge. You see Obummer has a "jobs plan". A bit late, but he has a "plan". All will be well. Who cares how much it will cost per job crated (I'm sure the banks will get their cut somehow). Spending insane amounts of money is something that he can apparently do better than anyone (or dare I say all combined) before him. Obama Has Now Increased Debt More than All Presidents from George Washington Through George H.W. Bush Combined | CNSnews.com

ABSOLUTE MUST READ! YOU HAVE TO READ THIS. EVERYONE! It is the best (easy to understand - everyone will get this one - not over your head - plain English that your kids would get) article that I have ever read explaining operation twist and how you are getting screwed and Wall St. is getting backdoor funding from you and me. This one will blow your mind big time.Fed Is 4 Times More Efficient At Selling Government Bonds Than The US Treasury... With A Taxpayer-Funded Twist | ZeroHedge. And now do you feel like a 99%er wanting to march on Wall St.?

Police State update - End game - What Constitution? Secret panel can put Americans on kill list' | Reuters. "There is no public record of the operations or decisions of the panel, which is a subset of the White House's National Security Council, several current and former officials said. Neither is there any law establishing its existence or setting out the rules by which it is supposed to operate."

Daily Index Comparison - I'd say were at either a turning point or it breaks out. Based on daily indicators this puppy should have some room to run. We'll know in the morning who wins the battle. Heck, the whole world could be bankrupt in the morning, so who knows. 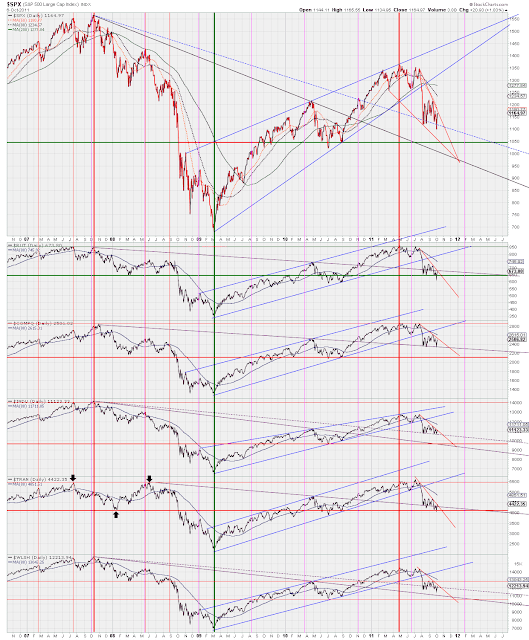