Well, it is the season for miraculous comebacks? The NFL and NCAA had some big time rallies this weekend. Can the markets pull one off here? We all know the markets are rigged and have the officials in their pocket, so it may not be a fair game. The new POMO schedule is out. and I suggest you take a look at it here - Tentative Outright Treasury Operation Schedule - Federal Reserve Bank of New York.

News was hot and heavy over the weekend. STB loves it when the "experts" come in several months behind where we are with prognostications and confirm our long standing views. "My secular view remains bearish. In or within a year from now I expect global equities to be 25% to 30% lower. My S&P500 target for the low in 2012 remains 800/900, and I think an 'undershoot' into the 700s is entirely possible." Bob Janjuah: "In One Year I Expect Global Equities To Be 25%/30% Lower; The S&P Will Reach Low 1000s In October" | ZeroHedge

I'm pretty sure that everyone at STB has been on the side that Greece is doomed and it is only a matter of time before they default. I have expressed my "hope" (a worthless word these days) that the powers that be have been in the process of planning how to handle the bust. Greece bailouts used to last a year, then 6 months then a month and now only a week or two max. "Without the latest euro8 billion ($10.8 billion) loan, Greece has said it won't be able to pay all its bills starting in mid-October." My Way News - Stocks tank as Greece admits it won't hit targets

Let's look at some minis charts this morning. STB has been spot on with our diagonal universe identifying some good support points (pink) and putting you on the recent channel (yellow) mid last week early in the game. 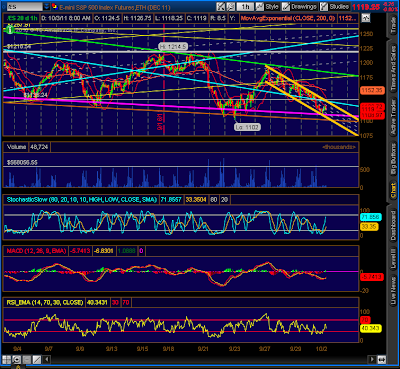 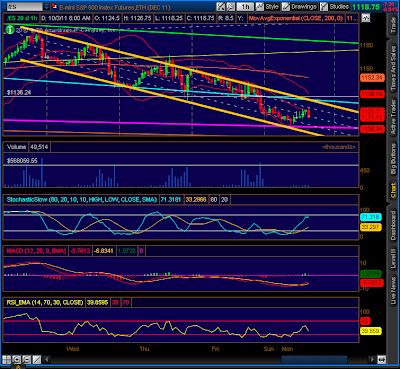 /es 1m with VWAP - This is the chart I refer to in the comments during the day. It will get refreshed if necessary. 1119 trying to hold here while price is stuck just under the VWAP and 1m 200ma.

Daily SPX - See that lower blue support diagonal off the July/September lows of last year picking up price here? Now see the dashed blue falling wedge. See the narrow tiny little space between the support and the resistance diagonals? That says if they don't do something fast it is game over. 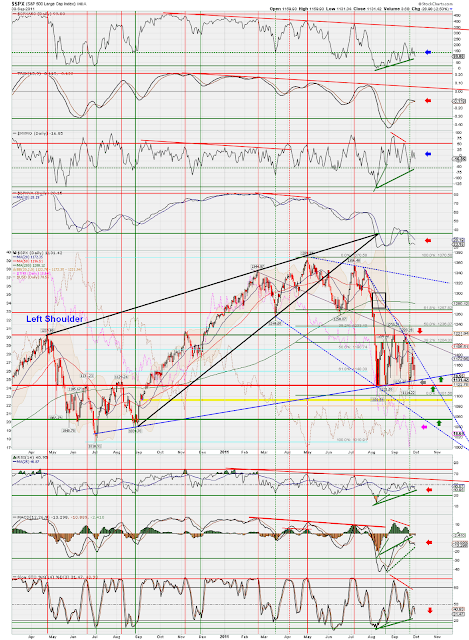