IMF Vows To Spend Some More Taxpayer Money | ZeroHedge. "The crowd that is wondering who will foot the bill remains dubious. Economic conditions continue to deteriorate globally. There is less willingness and less ability of the "rich" nations to fund the "poor" ones. There is even less willingness to fund the banks. It is great that Europe finally sees the problem, but they have waited too long. There is no group of countries left that is strong enough to support the banks and weak nations without getting dragged down themselves."

That sums the situation up nicely and let's you know why Germany has been balking at throwing good money after bad (did someone actually learn a history lesson?). They are waiting on another succa (Bernanke) to come along to heap piles of fiat on the issue. Think of it as a massive fire and then you throw a bunch of green (ink soaked) leaves on it. The fire goes down but the coals remain and eventually the leaves catch only adding more fuel to what was there. The ash represents devaluation of everything associated with the fire and that pile is growing massively.

STB is waiting on the big debt ceiling vote. There may be enough money to get us thru November, but that is it. (Don't forget +100% debt to GDP is just around the corner.) They can't keep doing these in the dark late night after president speech/football game votes forever. With debt ceiling clarity will come the grand amount we have to throw at the global situation and that IMO will unleash the final QE rush. As I have been anticipating, they will do everything they can to keep it afloat because the market is all they have left. My two scenarios still stand, it either collapses at any moment in the next year or they can keep it alive till the first major debt ceiling vote in 2013 just beyond the election.

If you want my thoughts on the rumor driven ramp yesterday and if you would like a hard cold dose of reality please see last night's post Afternoon Delight 10/04/11 - Rumor Driven! I'm not rehashing that again. It will just piss me off.

Yesterday morning I said, ""Minis 15m - Someone late yesterday mentioned a backtest of the yellow channel. It may want the busted support of the larger formation (pink or orange) or even the blue shown in detail yesterday. If not .... you know what to do when you see the flash."" Here is a 4hr /es chart - If these levels go down then you will ahve to look up near 1165 green diagonal resistance. Price reversed off the blue diagonal this morning. As noted this week, that blue diagonal effected price 6 times in the past week. There is a chance that the minis are trying to form a falling wedge here. 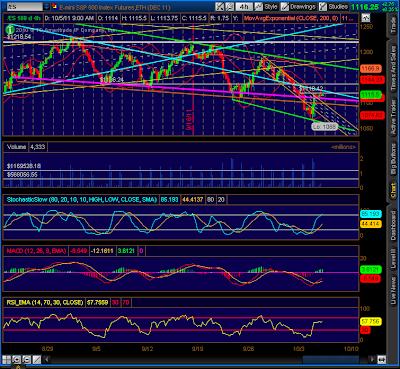 Here is the 5m chart from this morning - Tagged that blue diagonal twice. If it goes then the daily divergences that have been there for well over a week may finalyy begin to push up. Don;t get all carried away. I don;t think we're ready for a major bear market corrective, but you never know. 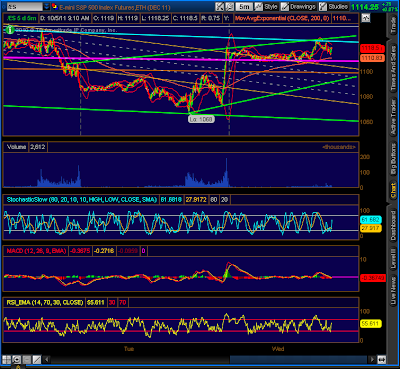 Yesterday I linked this 30m chart in the comments. It pretty much nailed the turn. I was watching the 5, 10 and 15m that were saying nothing and this was the one chart I did not update till too late yesterday. Upper diagonal resistance in the 1160 area which jives with the minis upper resistance. 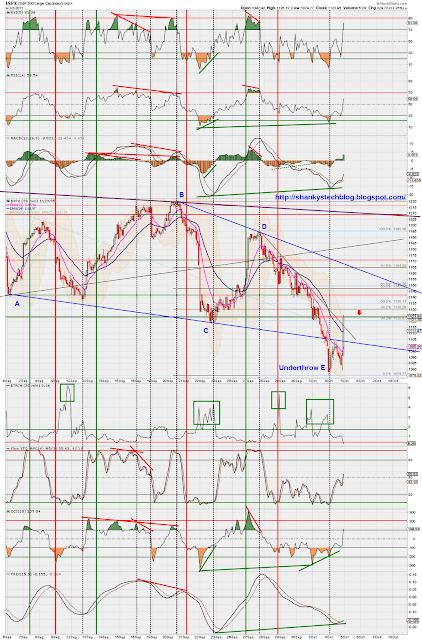 Here is the daily chart. The NYMO has been a good turn indicator recently. Note the green divergences are now a double (if not triple divergence). Price yesterday got within 35 points of the STB 1040 target. I'm not giving up yet and still believe that there is a chance that that target may prove to be conservative. Duck and cover remains in effect (well, actually from now on is always in effect). 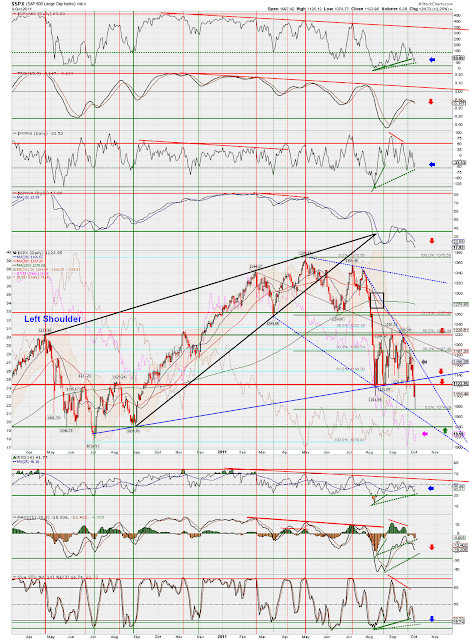 I'll patiently wait to see what this rumor driven ramp has to offer. The last two were taken back. SPX at resistance here, so I'll just back off and wait for clarity. I'm a little different trader. I don't feel pressure nor have the desire to catch every move. I prefer clarity, thus I will wait.

Almost forgot you 1m minis with VWAP chart - Blue diagonal with upper VWAP band is resistance at 1124 and support is the pink major support and the lower band near 1106. That is pretty simple right there. 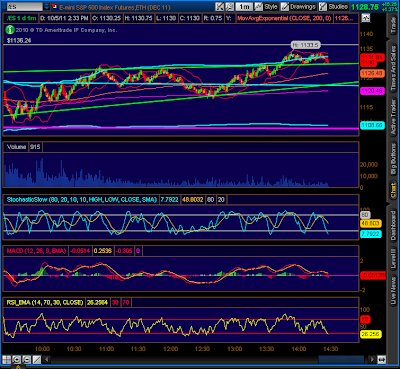