STB in the not to distant past railed on the municipal crisis that is coming. It has been some time since STB has addressed this issue, but STB has not forgotten it. "We are confident the spinmasters will spin the first major domino in the muni crisis as bullish: after all it "removes uncertainty." Bloomberg reports that "The city of Harrisburg, Pennsylvania, facing a state takeover of its finances, filed for bankruptcy protection following a vote by the City Council," It Begins: Harrisburg Files For Bankruptcy Protection | ZeroHedge

It will not be long till more municipalities follow, then the states have to pick up the slack. this will not be possible. Welcome to the beginning of the end. Just one domino is all it takes. Several other smaller munis have failed under the radar, but this is the first sizable one to go. Discussing state budgets with a good friend the problems facing them in 2012 will be very pressing. Income is way down and deeper cuts in state budgets are coming. A rash of muni crashes is something the states can not handle and something the federal government will not even begin to touch.

AA failed last night and PEP was fine this morning. Next week earnings get really interesting. ere is an earnings schedule you should bookmark - U.S. Earnings: Company Earnings Calendar - Bloomberg

The rest of the news remains over the top bad, no EFSF vote, China, and whatever else you want to throw at the wall, it is all as dire as ever. That does not matter to the markets though which move along with blinders chasing the dream. All is well.

Oil - /cl - If it breaks out of the channel the green resistance diagonal should be expected. Not sure what economically could drive this, but a war in the middle east would take care of that green diagonal and then some. 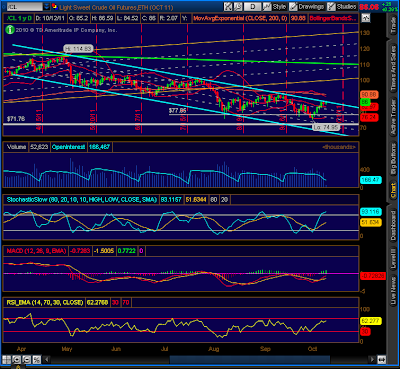 SPX Daily - I decided to throw up a little ABD chart to show you what should be happening at this point. I ran it with fibs, so it should be representative of what may come. For those that prescribe to EWT (that should not and should run like hell from it) this would be a second wave corrective and, if right, then early 2012 should be a complete disaster. I'll have to run this thru the TA grinder as things play out. Anything above 1256 and their theory blows up yet again.

Minis 1m - I'll begin posting this as it may become relevant in trading again. In a constant updraft nothing really matters. 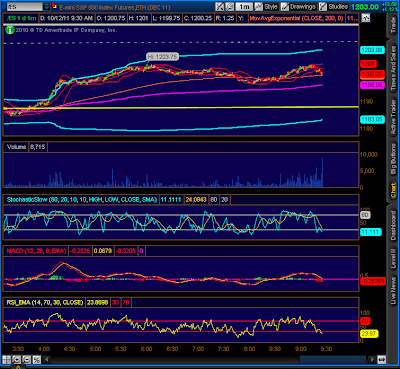