OK, so I am still bitching about the market moving up on vapor volume driven by HFT algobots and rumors about euro zone bailouts that are no more than rumors. You should be as well at this point. Again, I was not short and did not get burned. I'm pissed at the illegal, manipulated bullshit that the markets have become.

About the only surprise today (not if you look at that weekly chart I shave been showing) is AAPL missing earnings. Add it all up and you find they got a whole bunch out of nothing and get the pleasure of RELOADING THE RUMOR MILL yet again later this week.

At some point all these rumors are gonna press price up to a point that the real announcement will be no more than a dud commencing a serious sell the news event. Markets should not even be sniffing these levels anyway. Without the promise of nationalization of the banks as a backstop (which is funny cause who's gonna backstop the nation behind the bailout) they would all be toast right now. For goodness sake, look at all the FASB and DVA assisted beats we have seen this week. How about this headline that did not even phase the markets today - S&P Downgrades Over 20 Italian Banks, Says Difficult Climate Is Neither "Transitory" Nor "Easily Reversed" | ZeroHedge.

And never mind, "Local governments, once a steady source of employment in tough economic times, are shedding jobs in unprecedented numbers, and heavy payroll losses are expected to persist into next year." Budget Cuts Claim Hundreds of Thousands of County, City Jobs - CNBC

WTF is all you can say. I'm not even gonna rehash all the brutal headlines from today. All you need to know is that there is a global debt problem. A huge fucking debt problem. What are they gonna do to solve it? In the EU (the most pressing issue now) they are gonna add a cool $2T on top of all the toxic crap they can't pay back in the first place. You know how this all ends - badly. Hopium and kicking the can are not solutions.

In other lovely news, ""Vince Sampson, president, Education Finance Council, said during a panel at the IMN ABS East Conference in Miami Monday that lenders are no longer pushing loans to people who can’t afford them." The Fraud At The Heart Of Student Lending Exposed - The One Sentence Everyone Should Read | ZeroHedge. This topic drifts in and out of the light. It should remain in the spotlight as this problem is even larger than  this nations credit card debt. Yes, this is a massive bubble driven by greed and the banks theft of even more middle and lower class youth.

"The Census Bureau has now fixed at 2041 the year when whites become a minority in a country where the Founding Fathers had restricted citizenship to "free white persons" of "good moral character."" A.D. 2041 -- End of White America? | CNSnews.com. Hop to it whitey. You got some catching up to do. STB says, let's get it on early and often.

What in the world will potus do without his teleprompter? Lord bless those that took it. I don't never listen to him anyway, so it does not matter to me. Thieves steal truck with President's equipment - NBC12.

potus gets no respect (I don't even capitalize anything associated to him). STB has been joyfully pointing out his demise for months now (and I will continue to do so). "Republicans say Democrats, particularly Senate incumbents trying to preserve a narrow majority in the Nov. 8 elections, are so afraid to embrace the unpopular president that Obama changed his Virginia itinerary to avoid stops near targeted Democrats." The Associated Press: Some Dems won't join Obama in swing through Va. Reminds me of a great movie scene, "Run away! Run Away!"

STB has warned about Fukushima since day one - It was a nuclear disaster it ain't gonna get nay better (slightly worse than the debt issue which has a half life of 15 and not 10 years). More than 20 Radioactive Hotspots Found in Tokyo So Far . Keep an eye on things over there. It is a total mess that is being covered up worse than anything on the planet right now. (Run Away!)

Chart of the Day - Last Wednesday when I called the top I was not all that pumped about it. Then Friday I thought that was it. I remained nervous about downside as we had AAPL and 10/23 hanging out there. Today removed the AAPL issue and 10/23 should now be priced in. I don't get the ramps and this is reminiscent of the July ramp after the 07/07 top. It is stupid. Should get the same results on the backside. the problem with that is I'm thinking the next large move comes down in November.

SPX 60m - Mega divergence on a cycle top at NT range top - what more could you ask for? And as you will see in the morning the daily chart looks like crud now. ("Run Away!") Now that AAPL is behind us and the 10/23 bailout is priced in, maybe the bears get the ball back. Oh don't forget BAC and C and JPM and WF and IBM and ...... sure, yeah, all that and the market is ramping? Bullshit! Bernank was right when he said that he had more tricks up his sleeve. 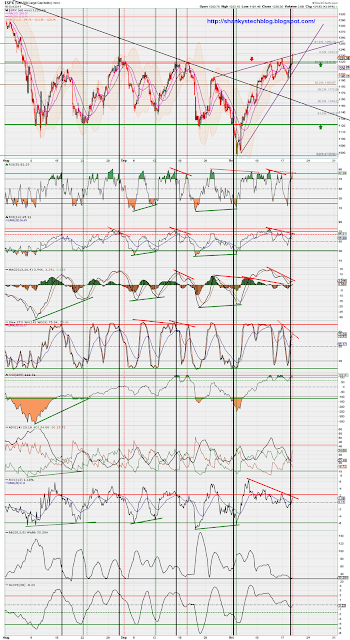