Well, wasn't that nice. A 340 up DOW day that defied all logic and expectations. Nothing like the EU selling their soul to CHINA of all places to rally the markets. Nothing like an act of hopium that destroys the future of nations to cause the markets to move up like the promise of tomorrow is better than anytime in history. To those that know the math does not work and are constantly aggravated by the corruption and lies, all I can say is food, seeds, guns, ammo, silver and gold. They keep adding nails to the coffin and at the rate they are moving the last corner is coming fast (it is already sealed to the point that they can't get out).

OK, now here is where we get into the death of the dollar, nationalization or protectionism, and the potential catalyst for WWIII. Wait a minute, Shanky how did we get to this point overnight? Simple, the Fed told the EU to get its shit together. It couldn't, so they went to the devil to make a deal instead of totally collapsing.

UPDATE - Damn that was a short honeymoon - Euro Bailout Cracks Emerge; Greece "Just Says No" | ZeroHedge. In other words the "plan" is already blowing up. Congratulations, everyone was taken to the cleaners on this greatest farce ever. Now the only question is how much did they take out the back door today while no one was watching? Looking like the speculation and total disgust espoused on STB for the past two weeks was spot on (we knew it was without this or not). Stick a fork in 'em. This is so confusing following the news, yet it is not if you do the simple math and know there is no solution to the problem.

"Reflecting the unease in Europe, the head of Germany’s industry association, said he feared Chinese help could “come at a political cost”. Hans-Peter Keitel told the FT: “Asking a non-eurozone nation to help the euro would the the other nation the power to decide the fate of the single currency.” China Lays Out Conditions Under Which It Will Bail Out Europe; Does Not Want To Be Seen As "Source Of Dumb Money" | ZeroHedge


I have deleted about eight paragraphs trying to calculate the outcomes from China's involvement in this situation. (Heck, there is so much crap going down you really can't do a simple post any more. The dominoes are in motion.) Everything I write just leads to the system being busted at every turn. Every trail leads to a minefield of financial ruin. Default must occur and then systemic failures will collapse the banking industry (and with it the insurance industry).

With China "invested" now, the stakes just went to DEFCON 2 (well for the EU they did). Just how far did the Fed let the EU go with this "bail yourself out" move? Was this a protectionist stance the US took to remove its self from the situation? How many ties were cut? How much control and influence will China now wield over the system where we used to dominate? Can't you see Sarkozy looking at the Bernank saying, "Sorry Ben, no can do. We've got a new master now."

We all know that the US (fast approaching 100% debt/GDP) is in deep shit and not getting any better. How about that totally ignored 402.000 jobs print this morning? Nice! As STB noted in August the debt ceiling vote in November would be the next major event and here we are. It is time for our turn in the spotlight. Trillions in spending is the easy part. It is the trillions in cuts that will rock this country to the core.

Off topic, but in STB's wheelhouse -

Forget Earnings Beats, Forward Expectations Are Rolling Over Rapidly | ZeroHedge.  "12 Month forward EPS expectations have started to roll-over quite significantly for the S&P 500 (at around a -8.5% annualized clip) - the last time we saw this was Q4 2007 and we know how well that ended."

Monthly Index Comparison - If you are into diversification - sorry. What was once an open and free market has become a correlated behemoth. This is an amazing chart that screams volumes about the markets today. 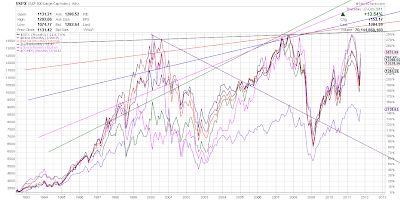