UPDATE - Had to sling this to the top - "This is up from 41% a year ago and is the highest Gallup has recorded since 1993, albeit marginally above the 44% and 45% highs seen during that period." Gun Ownership Soars To 18 Year High: 47% Of Americans Admit To Owning A Gun | ZeroHedge

This rumor has been floating around for weeks and still moves the markets - For a bright and cheerful MSM summary of what happened today (which was nothing) see, "Meanwhile, reports also surfaced Wednesday night that French President Nicolas Sarkozy will speak with Chinese President Hu Jintao on Thursday about boosting the EFSF. Reuters and the Wall Street Journal both cited unnamed European Union sources." European Debt Crisis - Euro Zone to Boost Bailout Fund by 4-Fold: Sources - CNBC

Yup, I led with a CNBS post. Why? To emphasize my disgust with this whole situation. Solving a debt crisis with more levered debt is no solution. Greece has still to be resolved. This is the nasty part of this (well, so is all the austerity and crony corruption). Kicking the can does nothing other than delaying the inevitable.

From one of the larger problem children over there, "Don't anyone say Italy is not willing to tackle austerity with the determination of a rabid dog: retirement age to be raised by 2 years in 15 years, and an epic €5 billion to be raised from privatizations. "Italy Concedes To Full Blown Austerity: To Raise Retirement Age From 65 To 67 By 2026 | ZeroHedge. Now that is what I call real effort to resolve the crisis save your government job for another year.


About face! March! Merkel caves, "As she glowered darkly, speaker after speaker from the Social Democrats (SPD), the Greens, and Die Linke, asked how she could possibly reconcile her plan to leverage the EFSF to €1 trillion or €1.5 trillion (we still don’t know how much) with solemn pledges to the Bundestag just three weeks ago that there would be no such leverage." Mish's Global Economic Trend Analysis: Grateful for Idiocy, a Pack of Lies, Financial Engineering, Legerdemain, and Trickery; Opposition Leader Rebukes Merkel's Lies and Arrogance of Power


How dire is this situation? WAR? We'll MENA is already super unstable and the white house and congress are warning other dictators that they could be next. How bout Merkel whrowing some gas on the "war" fire. "Peace should not be taken for granted if the euro fails, German chancellor Merkel told MPs Wednesday (26 October) ahead of the eurozone summit where an increase of the bail-out fund firepower may lead to Germany's own state assets being taken as collateral." EUobserver.com / Economic Affairs / Merkel wants 'permanent' supervision of Greece, warns of war

This guy must read STB. "Europe is playing havoc with this old trading strategy. By only having rumors and never having news they keep the markets in permanent buy the rumor mode." Buy The Rumor, Sell The News | ZeroHedge. Problem is we never get to the news.

This little tidbit went unnoticed today - Last Treasury Auction Before US Breaches 100% Debt To GDP Prices Quietly And Without Surprises | ZeroHedge. STB has been noting that the focus will shift to our problems in November (and then back to the EU next year and then here then there then here then there). I told you in August this was coming and that it will get fugly. "And if the points members made during the two-hour hearing are any indication, the 12-member panel has a long way to go to reach a deal before its Nov. 23 deadline to present a package worth $1.2 trillion in deficit savings over 10 years to Congress." Super Committee Holds Public Session on Budget Cuts - Katy O'Donnell - NationalJournal.com

The consumer is just fine and sentiment is at all time ... lows - "A week before Halloween and two full months before Christmas, stores are desperately trying to outdo each other in hopes of drawing in customers worn down by the economy." Mish's Global Economic Trend Analysis: Holiday Price Wars Begin Because "Price Matters"

"Vehicles from the area around the Fukushima Daiichi nuclear plant, which suffered a series of meltdowns after the earthquake and tsunami of March 11, were supposed to be destroyed. But unscrupulous dealers have registered them under new license plates and sold them, The Asahi Shimbun newspaper reported. Unable to export the cars, they're selling them in Japan." Radioactive Used Cars Being Sold in Japan | NBC Los Angeles. The lies protecting everything in Japan are astounding. Your health does not matter only corporate profits and the money that flows thru them to the politicians.

If you like the government all up your ass in everything you do every day at any moment, then you'll love this post. "New street lights that include “Homeland Security” applications including speaker systems, motion sensors and video surveillance are now being rolled out with the aid of government funding." New Street Lights To Have “Homeland Security” Applications Alex Jones' Infowars

BPSPX v. SPX - Are things getting a little too bullish or is there room to run? The CPC chart still says the market is in full blown bear mode. 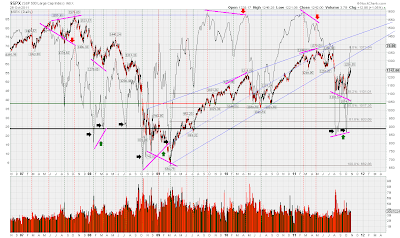 Monthly Comparison Chart - For those of you fractaling this top to 2007, the monthly did have a reversal candle like this in the 6th month as well (in '00 it was in the 5th month). Not this impressive, but needs to be noted. 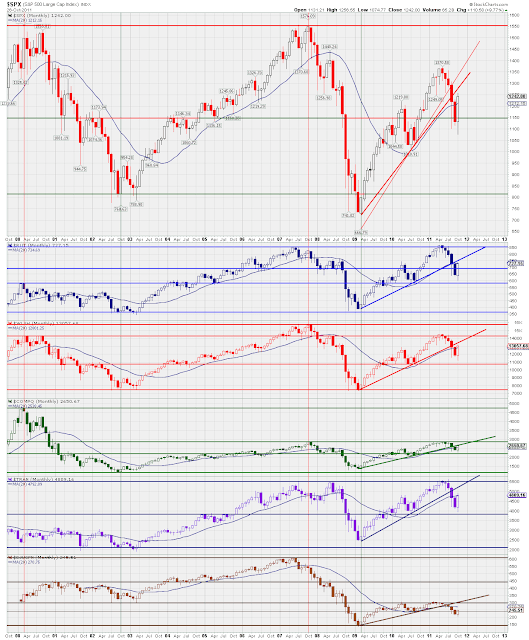