Well, that sucked. A day that went nowhere? A daily doji at resistance in the top of a wedge? News was extinct for the most part waiting on the EFSF vote and AA after hours. Blah would be the best way to describe today's actions.

The way I see it is they will need a catalyst later this week and told them to hold off on approval - Slovakia Rejects Plan To Expand EFSF, Government Falls | ZeroHedge

As I have been calling - this will not all end till the minimum wage has been lowered - yup - that is one of my calls. Extreme? Not when you really think about it. We have a massive amount of deterioration to go thru - ""The problem i have with the investment universe is that i find it difficult to envision how the US and western Europe can return to healthy sustainable growth without a complete purge of the financial system and some type of catalyst. Something that restores some measure of social cohesion among people;  it could be hyperinflation, a complete credit market collapse, widespread sovereign defaults, civil strife, major military confrontation.”" Marc Faber To America: "Listen You Lazy Bugger, You Need To Tighten Your Belts, You Need To Work More For Lower Salaries" | ZeroHedge

Of course EVERYONE ignored this - if it does not have to do with a central bank - fhugeddaboutit - Iranians charged in U.S. over plot to kill Saudi envoy | Reuters

I just laugh when I read stuff like this, I mean DC really must have their shit together - "The formal name of the panel is the President's Council on Jobs and Competitiveness, which is kind of ironic considering the fact that many of the CEOs on the panel have been rapidly shipping jobs out of the United States." Even The CEOs On Obama’s Job Creation Panel Are Shipping Jobs Out Of The United States  Want an even bigger laugh? Obama Jobs Council Stacked With Democratic Donors - ABC News

And on to the really scary shit -

"The Sunday veto means that when police arrest anybody in the Golden State, they may search that person’s mobile phone — which in the digital age likely means the contents of persons’ e-mail, call records, text messages, photos, banking activity, cloud-storage services, and even where the phone has traveled." Calif. Governor Veto Allows Warrantless Cellphone Searches | Threat Level | Wired.com

And thanks to Rich for this video that EVERYONE must watch - well if you don't eat food you can skip it. If you even care slightly about what you or your children are eating you should see this.

Who's zoomin who in this ramp job? 30m Index Comparison - 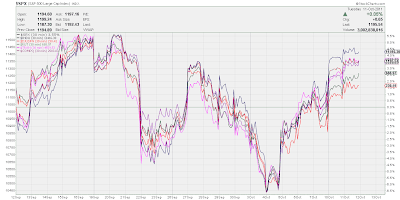