I'm not going there. I'll let Soup do all the moaning and groaning below in the comments section. Ridiculous? Nope, waaaaaaay beyond ridiculous. Hey, we're used to it. Desperate times require desperate measures. When QE and the Bernank can't buy the markets up you resort to dirty tricks and any source of stimulus possible.

As I have been telling you literally for years now, this market is all they have between them and basically anarchy. They will do whatever it takes to salvage it. Like a mother lion protecting her young, expect a fight to the death. Sadly death is what we're gonna get either way. Looks like the time has come to start scalping the patented 2008 3:00 mega ramps to the close.

If you think there is any reason to get long after reading the below - be my guest - This post is gonna get really busy - so stick with me - Don't forget to duck and cover when you see the flash.

If you do not read anything else please read this - "So, there is .... nothing definite, just more speculation, more rumors, and more innuendo. But hey, it worked last week with the Liesman rumor. It obviously would work for the FT which has become the End of Day rumor source du jour, first with China bailout rumors (since denied), then with recapitalization rumors (denied), and now with this joke. Pathetic." FT Causes Massive Short Squeeze With Mother Of All End Of Day Rumors | ZeroHedge

This is a must read as well. Not long ago I said that I used to do rants and cover all the issues easily. there were 10 to 15 major things going on. Now, if I tried to do one of those it would cover close to 100 issues - This post will shine a great light on just how bad things really are - "Anyone with an unbiased view of our planet would conclude that we are in unfathomable danger. The list of impending catastrophic issues that will blow up the world for millions in the U.S. and across the globe is virtually endless:" Guest Post: What This Country Needs Now Is Hope | ZeroHedge

OK, now that you have read that post now read this one - "But the reality is that some really, really monumental stuff has been going down." Bad Financial News Keeps Pouring In: 14 Facts That Just Might Scare The Living Daylights Out Of You . My personal favorite, "#12 A shocking new Bloomberg survey has found that approximately one out of every three international investors expects a "global economic meltdown" within the next 12 months, and 70 percent of them believe that the global economy is "deteriorating"."

Looking for a place to pay someone to store your money? Try US Treasury! "as we see below, that all T-Bills out to 12/15/11 currently offer a negative rate - with most notably the very short-term (less than one week) charging even more to store your money (1.5bps to store our money in T-Bills for 1 week)" Nothing For Money As Strips Aren't Free | ZeroHedge

Ladies, this is getting scary. Someone is betting on the endgame for the house of Mack. We, for one, can't wait for this week's H.4.1 release to find out if not who, then how much was borrowed at the Fed's discount window... MS 1 Year CDS Hit 800/875, Curve Massively Inverted | ZeroHedge

If you hear a sudden large whooooshing sound it will be the sound of China dumping treasuries. "An angry China warned Washington on Tuesday that passage of a bill aimed at forcing Beijing to let its currency rise could lead to a trade war between the world's top two economies." WRAPUP 2-China warns of trade war if U.S. bill passes | Reuters

Get the hell out! (Oh, and the website is still down) "It is hard to believe that a bank would impose such a fee on loyal customers who simply are trying to access their own money on deposit at Bank of America,” he said. “Especially when Bank of America for years has been encouraging their customers to use debit cards as much as possible.” Durbin to Bank of America Customers: ‘Get the Heck Out of That Bank’ - ABC News

OK and now to the non financial related disasters -

Gotta love living in a post Patriot Act world where Homeland Security resembles the KGB - "This is a president exploiting official secrecy so that he can claim legal justification for his actions without having to expose his specific reasoning to scrutiny. As the Post put it, "The administration officials refused to disclose the exact legal analysis used to authorize targeting Aulaqi, or how they considered any Fifth Amendment right to due process."" The Secret Memo That Explains Why Obama Can Kill Americans - Conor Friedersdorf - Politics - The Atlantic

Fast and Furious - perfectly describes the way the cronies in DC should go to jail, but don't - ""Allegations that senior Justice Department officials may have intentionally misled members of Congress are extremely troubling and must be addressed by an independent and objective special counsel. I urge you to appoint a special counsel who will investigate these allegations as soon as possible," Smith wrote. House Republicans Request Special Counsel To Probe Holder On 'Fast And Furious' | Fox News. Also see - So When Is Eric Holder Indicted? in [Market-Ticker]

Me thinks that relations with China are a bit strained - "The chairman of the House intelligence committee on Tuesday launched a broadside against the Chinese government and its efforts to steal commercial data and other intellectual property online, saying that Beijing’s cyber-espionage campaign has “reached an intolerable level” and that the United States and its allies have an “obligation to confront Beijing and demand that they put a stop to this piracy.”" Congressman lambastes Chinese cyber-espionage - Checkpoint Washington - The Washington Post

High-Level Economists, Congressmen and Many Americans Want to End the Fed Second Wave of Protests  "A majority of Americans are dissatisfied with the nation’s independent central bank, saying the U.S. Federal Reserve should either be brought under tighter political control or abolished outright, a poll shows"

Do you really want to see a chart? OK, here - this morning under the 15m chart I said, "Minis 15m - Someone late yesterday mentioned a backtest of the yellow channel. It may want the busted support of the larger formation (pink or orange) or even the blue shown in detail yesterday. If not .... you know what to do when you see the flash."

Here is the minis chart at the close - 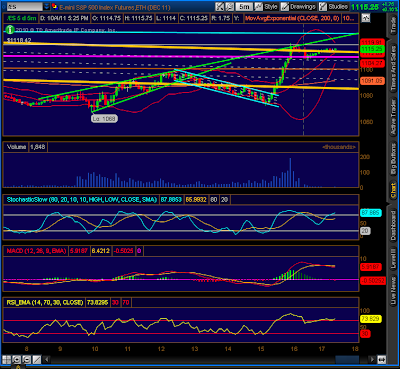 Backtest complete? Love those rumor driven ramps. And what was the first news to come out after the bell? And here we go again... Moody's Downgrades Italy To A2, Negative Outlook | ZeroHedge

Don't forget to duck and cover when you see the flash.