OK, so GS and AAPL miss on the same day and the futures the next morning are flat? Are you friggin serious? To those of you that don't think the markets are rigged, are you at least thinking twice now? Are you now at least somewhat skeptical? All the major banks are basically using accounting fraud pulling down DVA's (Debt Value Adjustments) by the BILLIONS to beat earnings and the markets are acting like nothing is wrong with this?

"There is just one piece of information one needs to see to realize just how big of a farce financial results reporting has become in America, with the accountants' and auditors' blessing. Morgan Stanley today reported income of $2.2 billion, or $1.14 per diluted share on an apples to unicorns basis, compared with income of $314 million, or $0.05 per diluted share, for the same period a year ago." $1.12 Of Morgan Stanley's $1.14 Q3 EPS Comes From Benefit Of Spread Blow Out | ZeroHedge. "As for what matters: Institutional Securities revenue would have been $3 billion net of the DVA compared to $5.2 billion in Q2 - said otherwise a complete business collapse in the quarter." (emphasis mine)

Folks, you are witnessing a coordinated occupation of the markets by the Fed, Treasury, administration and all branches underneath to do anything they can at this point to save the capitalist system. As mentioned on STB many times in the past, they are fighting to keep the illusion (market valuations) all is well and that your assets are safe. It is the last thing standing between them and stone cold reality that the system is busted.

The debt must be paid down. There is no other option. The system has not responded to trillions in stimulus that have done nothing but stuff the banksters pockets and keep the illusion they are solvent. Throwing more debt on top of already unsustainable debt levels is no way to solve the problem it only makes the end result that much worse. How in the world is the EU gonna pay back an additional $2t of debt when they can't support their current debt load? This is pure insanity and the governments are preying in the ignorance and complacency of the sheeple.

You better be paying attention to the riots in Greece and Egypt. They both started peacefully just like the OWS movement. We'll all be in the streets when we finally wake up to the fraud and corruption that may be worse here than on any other place on the planet (close second to China).

I'm not gonna waste my time with a lot of charts this morning. Bottom line is the last time we had an unscrupulous run up like this was in July (and that one pales in comparison to this abomination of market abuse). We all know what happened after that. A big big bust is being set up.

Dialy SPX - At resistance with indicators tiring and entering overbought mode. NYMO and SPXA50 are ready for a turn. The divergences on the 60m chart is just sick. Yesterday I said I would "play it by ear", today I will do the same. Looking for a pretty sick move south still. Can (will they allow) that happen is the question? At this point even the clowns at CNBS are starting to question the validity of what is happening in the markets. I got a feeling I'll be pulling out that duck and cover video soon. STB has been looking to November for the next big move south. At this time, I'm not sure we'll make it till then. 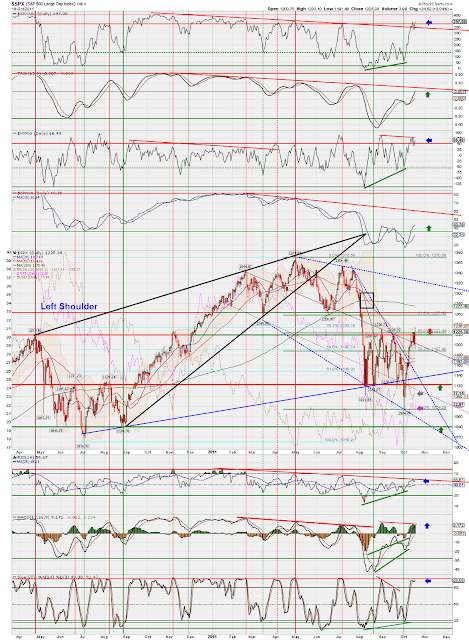 As I have been reporting - there are two scenarios - either they can stretch it for another year till the end, or it can collapse at any moment. 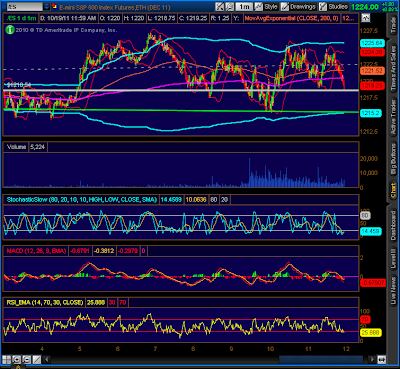