It makes little sense to really speculate or try and guess what's going to happen with the largest item on the radar - the EU summit. News and rumors out of this event from haircuts to massive bailouts should be overwhelming. this will make trading extremely dangerous this week.

Merkel's speech was uplifting and promising, but we have seen that rhetoric like this is just that. "Merkel: No one should take another 50 years of peace in Europe for Granted" Merkel Goes For The Nuclear Mutual Assured Destruction (But Mostly Suicide) Option | ZeroHedge and the line, "MERKEL SAYS GERMANY `IS NOT THE NAVEL OF THE WORLD'" goes to prove what STB and others have been saying all along - Wiemar part deux is off the table. The salvation (which is impossible) of the EU will fall on the IMF and the US taxpayer.

Have no fear STB readers, I'll get all fired up about a big move sooner than later. There is no sense in doing much of anything till the EU summit begins to wind down. I'm still looking to November for the big move south, but that can happen at any moment. As I have been saying, look for that tell all candle. The first 30m candle yesterday was promising, but we all should have known something was very wrong when they ripped it back up.

Daily SPX - Overbought and staring a sell the news event in the face. I'm still leaning on apullback and pop to double top setting divergences on the daily indicators that will deliver the sell signal. Right now it looks like 1257 SPX will be the ceiling, but that is not written in stone. This market is rigged and desperate. Take the AMZN miss last night and the /NQ being up 18.50 this morning. Things are far from normal. I like to look at the separation of SPX from TNX on this chart as an indicator of where price needs to go. See pink arrow. 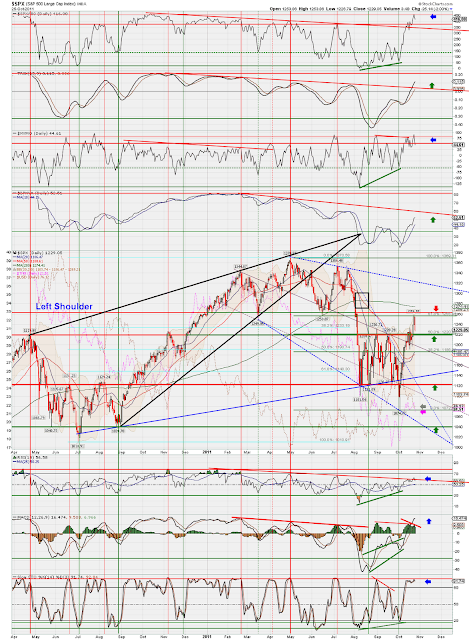 /es 4hr - 1218 has to go down to get anywhere south. At this time I think it will take a major candle to get back thru that point. 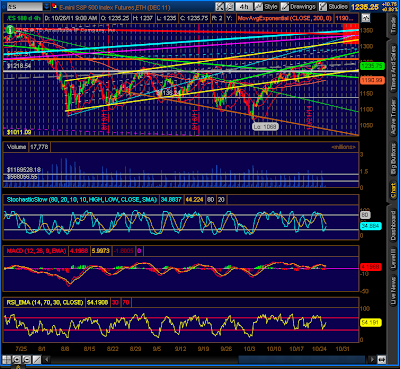 /es - 1m - Explosive move since 8:30. You know I like the trend of once above the VWAP it has good odds of remaining there all day. 1231 VWAP (pink) support and rising. This is nuts. 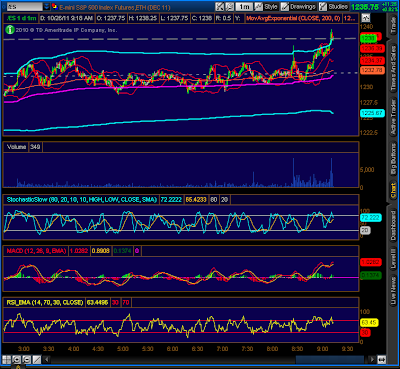