Well, well, well, the market can fall now can't it. I won't get too excited till SPX takes out 1220 support. Is the news finally catching up to price? Is reality actually sinking in? Is the fact that the EU is crumbling and has no answer to the debt problem other than defaulting back to the IMF (and the US taxpayer) actually registering with the markets? Wednesday could be a massive day especially towards or after the close. If the EU actually comes up with a resolution (which will not be followed as usual) the bears may get their sell the news event.

Not what they were expecting (or predicting to fool the markets) - Consumer Confidence Plunges To 39.8 From 45.4 On Expectations Of A Bump; Lowest Since March 2009 | ZeroHedge

Can they get it done? From what we've seen so far the answer is a resounding NO! That's fine, the market apparently loves the suspense. Europe crisis talks come down to the wire

Nuff said - ""We are living in crucial times. If the summit is a failure, this could tip the European continent into unknown territory," the sources from the ruling UMP party quoted the prime minister as saying during the meeting." 'Unknown territory' for Europe if summit fails: - MSN Indonesia News

Best EU debt solution description I have seen yet - If you don't get it I'll understand cause it makes no sense and only provides a venue for kicking the can one more time and making the end game that much worse - "The proposed solution of raising capital and issuing fresh debt to solve this issue is a joke."...."If I walk away from a home I owe $200k on and its fair market value is $100k (a 50% haircut), does a loan to my bank for $100K from the institution overseeing it change the impairment?  No. You’re shuffling the cards. Instead of taking a $100k loss, they now have an asset worth $100k and a new liability of $100k.  The asset is still worth $100k. Even though their little maneuver technically gives them an asset of $100k and cash of $100k, my bank now has $100K less to lend against.  Thus, their leverage increases." Guest Post: Facts Don’t Equal The Conclusion in Europe | ZeroHedge

Rememmber when mama told you to watch what you say? - "This prompted a humiliated Berlusconi who has enough problems of his own to launch a verbal attack on EU officials stating "No one in the EU can nominate themselves as special administrators and speak in the name of elected governments and the European people. No one is in the position of giving lessons to his partners"." Mish's Global Economic Trend Analysis: Apply Enough Pressure, Something Eventually Breaks; Italy Government on Brink of Collapse  and see FT Reports Italian Government On Brink Of Collapse | ZeroHedge

Coming to a bank near you - I have told you to have plenty of cash at home - "With talk of 50% or 60% haircuts on Greek bonds, already mistrustful Greek citizens have queued up to pull deposits." Mish's Global Economic Trend Analysis: Lines to Withdraw Deposits Queue Up as Run on the Banks starts in Greece

STB loves pointing out the fraud and corruption in the system that the regulators turn a blind eye to. Yesterday you read about Citi, today Dr. Paul Craig Roberts summarizes the severity and depth of the issues. You have to read this stuff to get in touch with reality. This is a great post - "As Reckless Endangerment shows, fraud characterized every stage of the process from the fraudulent borrower incomes and credit scores that mortgage issuers gave to unqualified buyers, through the securitization of the mortgages and their triple-A investment grade ratings by the rating agencies (Standard & Poor’s especially, but also Moody’s and Fitch) to the investment banks that sold what the banks knew was junk to investors around the world as investment grade securities. Indeed, Goldman Sachs was simultaneously betting against the mortgage derivatives that it was selling to clients." Reckless Endangerment: Totally Corrupt America Alex Jones' Infowars

And in other news -

Fukushima is back (well it never went away - the MSM just stopped covering it) - "“It’s above the recommended level [for drinking water],” Eric Pellerin, chief of Health Canada’s radiation-surveillance division, admitted in a phone interview from Ottawa. “At any time you sample it, it should not exceed the guideline.”" What are officials hiding about Fukushima? Straight.com

This is one that I tell people about and it blows their minds - no one knows that this is coming - A radioactive mat of tons of debris is coming to the west coast - You gotta read this one - "The ship’s encounter with the 1,000-mile-long mass of tsunami debris came in September -- 300 miles ahead of schedule, and nearly 2,000 miles from the site of the tsunami in Japan." WLS 890AM  Japan's Tsunami Debris to Hit US Sooner Than Expected

You really have to be careful on the net. Everyone wants to mine your data - with your permission or not - Google settles with FTC on privacy breaches - MarketWatch

"The White House wants you to see President Obama bash the rich, and everyone in the press corps is invited to cover the various rallies and speeches where he claims average people can’t get a break and the wealthy aren’t paying their fair share of taxes." ...."What the White House doesn’t want you to see is Obama schmoozing the rich so that he can pocket some of their money for his campaign." No Photos, Please, of Obama’s L.A. Fundraisers | The Blog on Obama: White House Dossier.

Just what is he trying to hide? Maybe the electorate voting for him is that ignorant - "President Obama is scheduled to appear before hundreds of donors at a $7,500-a-plate noontime fundraiser today at San Francisco's W Hotel - but not a single local reporter will be allowed inside to cover his only stop in the area, the White House said Monday." Obama freezes local reporters out of S.F. event. Add to that. "Three former top White House press aides called the move insular and politically short-sighted. And some press watchers said it is hypocritical for an administration that Obama promised would be "the most transparent in history.""

Daily SPX - Nice bearish engulfing reversal candle today. As pointed out the neckline and busted support backtested at 1257 along with the 61% retracemant of the move off 1370. Now the bears need confirmation day and a bust of 1220 support. It may need a bunker busted to get back thru 1220, but conditions are ripe for that. See all the green arrows? Those are your support points. Right now if price can get back thru 12290 then 1280 would be the next major battle ground.

While this could prove to be a major top, I am going to hold out for the possibility of a double top at 1257 setting a nice divergence signaling a much larger fall maybe in November. 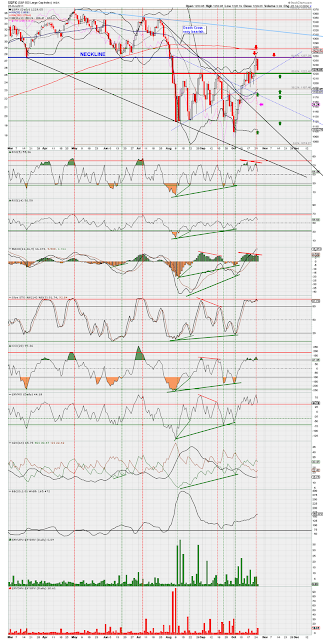