Not sure where to start today's post. I'm in a bit of shock after the late day swoon (even though it was long overdue) in the markets. I was not sure that was still a possibility. Glad to see it is. Someone must have shut down the FT's communication channels ability this afternoon.

Bottom line is everything is revolving around the EU solvency issues. All lies and fraud aside it appears the end of the rope is coming fast and Germany, not willing to return to its Wiemar roots, is clogging up the corrupted bailout process spoiling the party for everyone across the globe. "Unfortunately for Merkozy, their despotic and tyrranical measures according to which they represent the will of the people yet really all they do is preserve the viability of insolvent French banks, will no longer fly." And Now The Bundestag Demands A Say | ZeroHedge

Well the FT did get something out today, apparently they were on the short side with their news this afternoon. You have to assume someone if profiting off this news before it is released handsomely. FT Reports Europe To Sacrifice Its Banks To Bailout Sovereigns - Under €100 Billion In Bank Recap Funding Available | ZeroHedge  "Alas, there is no outcome that saves both the banks, and guarantees future European sovereign issuance under the currently contemplated structure. None." The message is clear, sorry Charlie, there ain't enough to go around to save everyone. This is not good.

This week I have already reported on the falsified earnings beats and the fact they are using the police in certain situations to keep you from transferring your accounts to other institutions. Why don't the want you to take your funds out? Simple, they have shifted MASSIVE amounts of risk to customer (supposedly FDIC insured) deposits. They are setting us up for the royal fuck job of the century.

"That the firm's ratings have deteriorated and thus it may be required to post additional capital against these positions by those counterparties does not justify shifting the risk to depositors simply so the bank can avoid posting collateral against a deteriorating credit picture, which for all intents and purposes shifts the risk to the taxpayer since the FDIC has a line of credit at Treasury. Is It Time To Close Down Bank of America? in [Market-Ticker]

Please read this from Denninger - And for what seems like years I have been using the simple argument that anyone can understand - do the math and you will see the end game is nothing but total doom - This is a great explanation the common sheeple will understand - "We cannot avoid the mathematical facts or their effects.  Unlike the laws of man that can be evaded through bribery and trickery mathematics cannot be.....You either accept these facts or you suffer the consequences." What You Simply MUST Understand in [Market-Ticker]

The Economic Collapse Blog is always a good read - The New Reality For U.S. Cities: No Money For Street Lights, Roving Packs Of Wild Dogs And Open-Air Drug Markets

Want to see Obummer struggle to get reelected (even worse than he is now!). I know I do. I'll gladly help to lessen his chance of reelection, will you? "Primary Obama Now has been created to promote a primary challenge to Obama based on his numerous failures and betrayals, to either reform him or dump him - let the people decide." Primary Obama Now

Daily Index Comparison - And the similarity to July is ....... 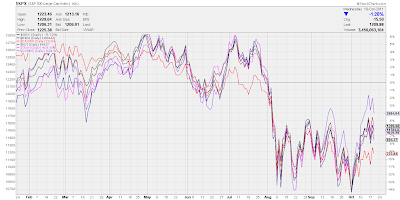 SPX vs. BPSPX (Bullish Percent) - Note the highs for bullish percent back at the beginning of the bear market, and where it is now ......... 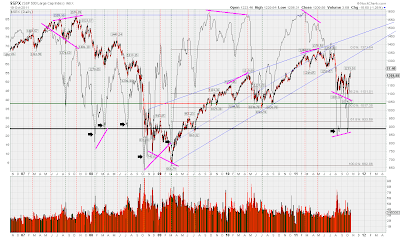